Modi doesn’t dress up his version of truth, it’s baldspeak 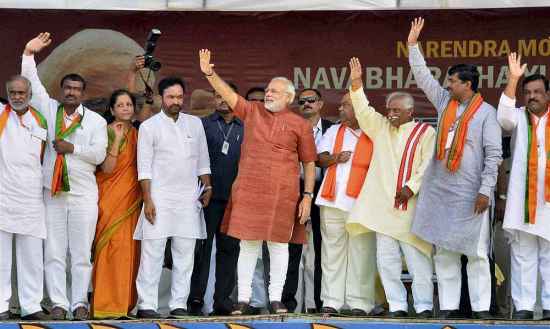 To understand Narendra Modi’s rhetoric, it is important to understand his mental universe. It is a composite of several trends. Like the reformers of the 19th century, he believes in the regeneration of Hinduism as he understands it. This is a colonial legacy which believes that the entity called Hinduism is a victim of undesirable influences as well as atrophy and degeneration. His response to this is to cloak the violence, power and ruthlessness of the West in what he understands to be the indigenous equivalent of the otherwise debilitating trend. Hence, his regular exhortation of strength, masculinity and efficiency has to be understood as foils to the Western models of power and glory. To legiti­mise this imitation of the West, he resorts to comfortable cliches about the Indian masses, celebrates the villages and the rom­antic notion of them. The celebration of a mythical Indian spirituality is part of the same legitimising function. All these elements are bound together by an inflamed nationalism that is forever looking for enemies and seeks to assimilate them or res­pond to them in kind. There is a sim­ple-mindedness to the mind caught amidst such glaring contradictions: it inhabits a universe devoid of paradox, irony, complexity and, above all, humour.

The last bit about humour hides a paradox. Modi’s lan­gu­age, delivered usually as a harangue or sound bite, approxima­tes most to that of the vidushak in Indian literature, distinct from the court jester or clown in the Western tradition. In Indian bhashas, as also in Sans­krit drama, the vidushak’s words offer an immediate, tangible connection with what is perceived as the truth, especially in a world filled with banal abstractions. His language is one that clears the web of complexity and brings us face-to-face with a crude, horri­fic and non-dramatic reality. In his role as a gar­rulous and convincingly eloquent individual, the vidushak supposedly conveys uncomfortable truths in a direct, sometimes crude, and blunt manner. Despite his linguistic dexterity, his words are ultimately cloying, ineffectual and debased. Why is this so?