No Place For Hate 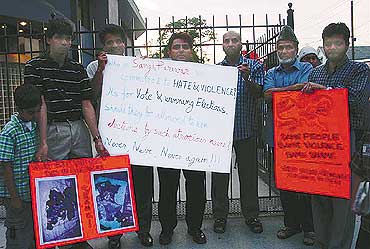 outlookindia.com
-0001-11-30T00:00:00+0553
Protesters outside the temple auditorium were prepared for anything: the taunts of right-wing hecklers, even the ignominy of being ignored. But they weren’t prepared to take musician Pandit Jasraj’s attending a reception honouring Sadhvi Rithambara of Babri Masjid demolition fame. "I’m throwing my three CDs of Jasraj in the garbage," said Satish Kolluri, who co-organised the protest at the Hindu Temple Society of North America, Queens, New York. "He has this whole secular ethos about himself and now he’s singing for this woman?" Perhaps the first public protest here against a Hindutva leader, picketeers held placards with images of charred bodies and messages like "Real Hindus Don’t Support Genocide". Organisers said the reception was to highlight Rithambara’s social work. Protesters claimed her true cause is far less benign.

"She is a prime mover of the ethnic hate speech going on in India," said Hanna Lessinger, an anthropologist. Protesters argued these receptions were merely fund-raisers for communal violence. Countered Dr Mukund Modi, founder of the Overseas Friends of the BJP. "Is it a crime to support orphaned kids and give them dignity?" Sanity, though, was best reflected by temple president Dr Uma Mysorekar: "We want to live peacefully with other groups. I don’t want anyone here who’s a controversial figure."