Exchange rate as a tool to fight inflation? Don’t bet your rupees.

Can a stronger rupee help in the fight against inflation? With the Reserve Bank allowing the rupee to appreciate 15 per cent over the past year, there’s no doubt this will reduce the import bill in a fast-growing economy. Global prices of the all-important crude oil have been heating up to around $80 per barrel. India, a net crude oil importer, has also been shopping for sugar, edible oil and pulses in the global market to cool domestic food prices. 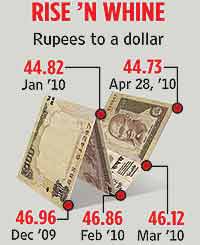 Strong capital inflows from overseas have given support to the rupee, taking it to a 19-month high. The question is how long will the RBI allow this appreciation to continue? The central bank insists it will not use the rupee to battle inflation. So will it step in, like it did a couple of years ago, and buy dollars to stem the rise? But wouldn’t that fuel enemy no. 1: inflation?

The debate is on. “I would rather that exchange is undervalued as China did to boost exports and employment,” avers Suresh D. Tendulkar, former head of the PM’s economic advisory committee. China, incidentally, looks like it will let the yuan appreciate, albeit very gradually, against the dollar. That said, many share Tendulkar’s view that the exchange rate policy cannot be the tool to control inflation.

It doesn’t help that Indian exporters are unhappy—though a bit muted—particularly after a wretched 2009-10. But there’s relief from recent bad news from Europe, which seems set to reverse the upward movement of the rupee. “There is limited room for further appreciation. Instead, given the current European Union scenario, it could depreciate to Rs 45 by mid-May,” opines Vikram Murarka, chief currency strategist, Kshitij Consultancy Service. The EU’s troubles could also lower foreign fund inflows and stem the inflation-exchange rate debate.

The Worm Is Acting Pricey