No One Killed Jessica

There are some fine, stand-out moments. What detracts are some obvious filmi touches 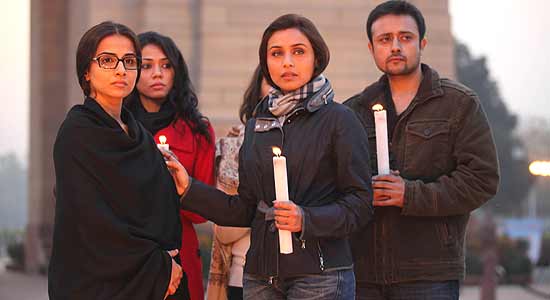 Raj Kumar Gupta’s second outing as a director, after Aamir, takes him beyond the realm of ‘small indie’ films. No One Killed Jessica has a far larger canvas and sweep. So there are broad emotional strokes, intense drama and populist dialogues, quintessential to mainstream cinema, balanced out with intermittent bursts of edginess and fine detailing. Gupta has the onerous task of telling a story (Jessica Lall murder case) which most of his viewers would already know. Nonetheless, he manages to keep the familiar quite engaging.

The film kicks off with a sense of urgency, setting up Delhi as the city of power games with Amit Trivedi’s energetic track Kaat Kaleja Dilli playing in the background. The infamous party, the shooting, Jessica’s death, the night call to her sister Sabrina (Vidya) and, later, the botched-up investigation and farcical court-room proceedings play out just as rapid-fire. Gupta brings in a parallel, fictional track of an ambitious, fiery TV journo (Rani) and eventually brings the two stories (and women) together. It might be difficult to accept Rani as a ‘young’ TV reporter but she does get her groove back. Aggressive, foul-mouthed yet aware and sensitive, she plays to the gallery with a confidence that had been missing in her performances of late. What’s more, she looks a million bucks. Vidya might be poles apart—subdued, halting and inhibited—but just as quietly effective and strong.

There are some interesting smaller acts like the cop played by Rajesh Sharma. Or Samara Chopra as the sexy-’n-spunky Naina Sehgal (inspired by Malini Ramani). But characters like Jessica’s mother turn out flat and Mallika Sehgal (a nod to Bina Ramani) gets caricatured. There are some fine, stand-out moments. Jessica’s parents, true to their innate decency, offering tea to the killer’s parents when they come for a round of fake mourning is heart-breaking. Gupta also brings in some quirky moments of mirth. Like the killer’s mother constantly harping on “Kuch bhi karo mujhe mera Monu wapas chahiye”. What detracts are some obvious filmi touches: Jessica’s mother’s death intercut with shots of the killer’s family singing Jai Mata Di on the way to Vaishno Devi. And the candlelight idealism also gets a bit too stretched.