No Noahs In Irrawaddy

The junta compounds the horrors brought on by the cyclone 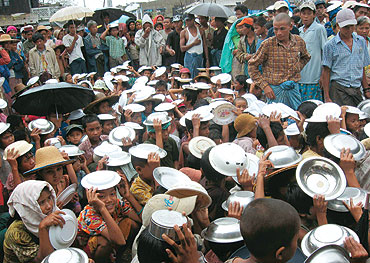 The stench of death blows across the vast flooded plains of the Irrawaddy delta. It's not a faint smell that creeps up on you. It suddenly hits you in the face, filling your mouth and nose, smothering your senses. And it assaults those in the delta even now, weeks after Cyclone Nargis smashed into the coastline. The stench should have been banished. Instead, the bodies of the lost lie amongst the living. They rot into the water supply, poisoning the people left behind. The rituals and traditions, which help bind this society in times of mourning, have been broken by a government that left communities to their fate. The dead have received attention only from the birds.

Imagine waking up each day next to the bloated corpse of your mother, husband, wife or child; meeting each day with the hope of help but going to bed knowing no one is coming; watching your child go hungry, your wounds fester, and your loved ones moulder away before you. This is what happened in Myanmar, as help that could save lives waited at the border. The wretched survivors of Cyclone Nargis lived like this hour after hour, day after day, week after week. This is Myanmar's shame.

"When there were demonstrations last year, the soldiers were everywhere," one man told me. "Where are they now?" he spat with disgust. And this was the mood in Yangon which, while badly damaged, had escaped relatively lightly compared to the carnage of the delta.

I had arrived in Myanmar posing as a tourist. The generals, who rule Myanmar, had no intention of formally allowing the outside world into the country to judge their actions. In a land where dissent costs you at least your liberty and sometimes your life, foreign journalists are unwelcome. The junta was telling the world that the relief effort was under control. What I saw in the delta proved that a lie. The deceit confronted you as soon as you drove down the main highway from Yangon towards the devastated region around Bogalay.

Last week I was in Sichuan, in China, the scene of a devastating earthquake. Five days into that relief effort, trucks carrying aid were too many to count. At the same stage in Myanmar, travelling through the Irrawaddy delta, I counted only two. A disaster the size of this cyclone would have taxed even the most advanced and equipped nation on earth. Myanmar is neither of those. There was never any prospect that the authorities could have coped with this calamity. Still, they continued to refuse help. Instead, the junta announced that while aid was welcome, the people with the skills needed to deliver it were not. The relief agencies protested. One week into the disaster, a critical point beyond which few of the physically trapped normally survive, the generals responded to the demands for access. They sent the visa officers on a three-day national holiday. It led world leaders to condemn an "inhuman" response to the disaster bordering on a "crime against humanity". 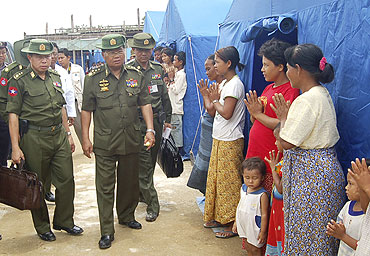 As the wrangling went on around the world, in the delta I found a man in Pyapon standing in the wreckage of his home. He told me I was the first person to come and inquire about the state of his town. "We heard that maybe foreign aid was coming," he said, "and we need it". Around him people scavenged through debris to built temporary shelters. Children stood around motionless. Unable to comprehend the force that had shattered the comfortable routine of their daily lives. It is the children, aid groups say, that have paid the price for the generals' wanton mismanagement. Just days after the disaster, the United Nations emergency relief co-coordinator John Holmes warned that "the humanitarian situation is increasingly desperate". Even at the best of times, children under five years in Myanmar are thought to be undernourished. Now they face days and weeks without proper food or clean drinking water. A local Red Cross worker in Bogalay told me that dysentery had already begun to get a grip on the young and the sick.

I drove around Bogalay under the cover of darkness. I found the staging post the military had finally set up to begin loading small boats with food aid. It was nowhere near enough. But while the authorities didn't apply the means to save their people, they found the resources to begin a manhunt for me. I had done something foreign correspondents do not normally do. I had put my name and face on TV while still in the country. The government had set the military intelligence and the special branch on to me. My photo had apparently been circulated to every military checkpoint. My name was being scoured for among the records of all foreigners travelling around the country. I had become, briefly, Myanmar's most wanted man. And as they no doubt hoped, it hampered my reporting. The very worse affected areas were cut off from me behind blocked roads and broken bridges. The army largely controlled access to the waterways. The aid agencies based in Yangon were overwhelmed and under-resourced. Ultimately, we may never know the true scale of the disaster. I never got to uncover it. Eventually, I was deported.

Nature created this disaster. It washed away lives, swept apart families and decimated communities. But the tragedy of the disaster may prove to be that people died despite the fact that the means to save them was there. And that was man-made.

(Paul Danahar, the editor of BBC's Asia Bureau is based in Beijing. He was previously posted in India.)