No More Bananas On Your Breakfast Table?

A fungal infection with no sure cure is ravaging the world’s bananas. And it’s sweeping through India. 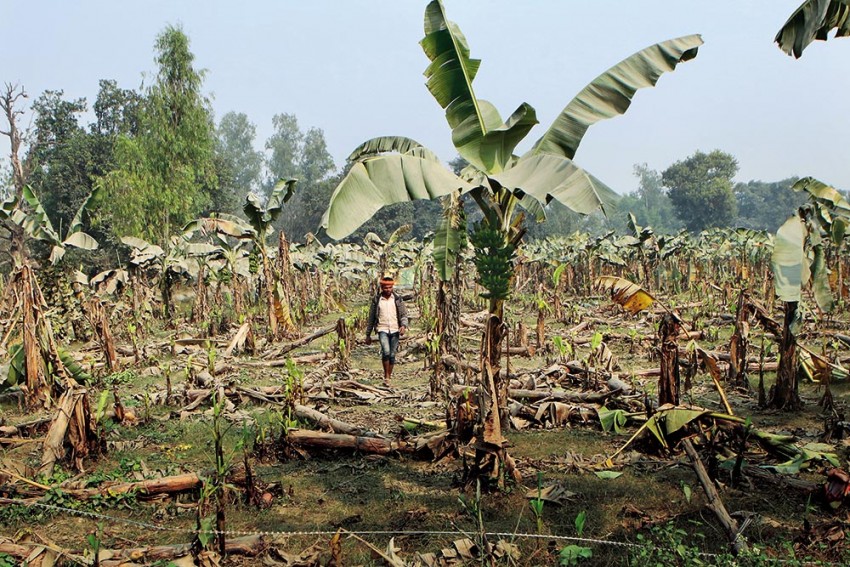 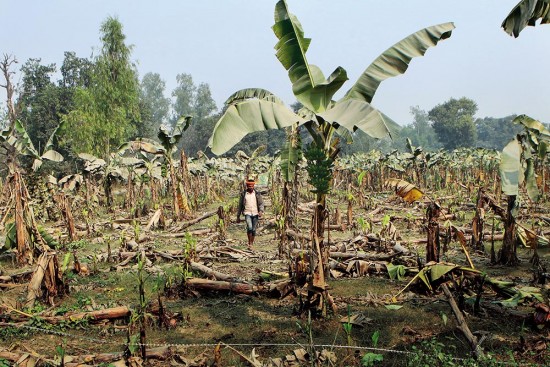 On NH27, the two-lane span of highway from Lucknow to Barabanki is thick with unruly trucks making their way thr­ough the smog into what is ess­entially sweet country. ­Sugar mills and fields of cane regularly dot the passing landscape. Also at hand is a less sweet cousin, filling plantations that sprawl for acre after acre in eye-popping green. Banana, that rich source of potassium and phallic wit, is one of the major crops of this area—as it is in Bihar and Maharashtra, and a lot of south India. The jovial fruit is, however, attracting more than ­humour these days.

The news, in fact, is a little grave—and is not being much talked about officially so as not to cause a scare. Along with the commercially viable banana varieties from the West, India seems to have imp­orted a debilitating fungal infection. It’s ruining not just the crop, but the soil its­elf. And the farmers don’t know that yet.

Mineet Mishra, a 28-year-old farmer, has about an acre where he predominantly grows the Grand Nain strain, source of the commercial Cavendish ­bananas, aside from wheat on the side. He turns away and chuckles when fungus is mentioned, and asks a helper to cut down a plant. Just a few hacks later, the tree succumbs—as if it’s almost willing to fall—and reveals the rotting inside of the stem. “We’ve seen some plants in nearby fields fall with just one push. Anti-fungal medicines don’t work on this,” Mishra tells Outlook.

It wasn’t just one. The men went ahead and chopped down several plants they knew were susceptible, from the last batch awaiting harvest. All were in varying stages of decay. His fields hold about 1,500 banana plants, and Mishra says, “Between 12 and 14 out of every batch of 100–150 plants have rotted this year.” Signs of the fungal attack cropped up some two years ago, and the rot has just become deeper. 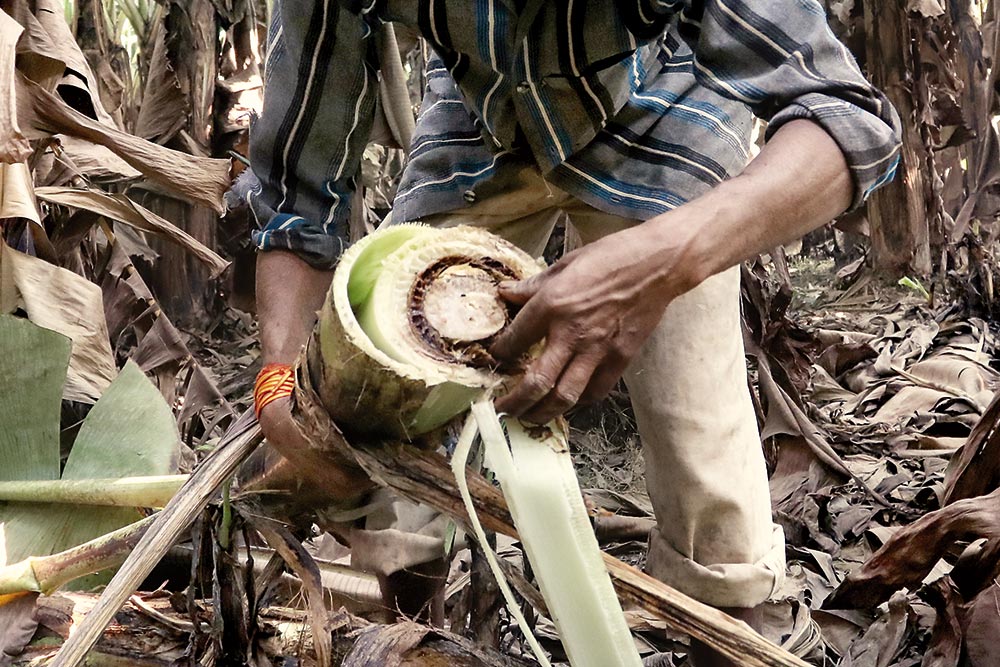 The troubling thing is, there was advance warning. Like a crop growing anew every year, this pattern too has been repeating, like a dark rhythm, through the years. There’s little chance Mishra would have known of the screaming headline in The New York Times from 2008, “Yes! We Have No Bananas”, which itself reprised the title of a popular 1922 Broadway hit. That song came from the travails of a grocer who ran out of bananas. It was a fungal disease that wiped out Gros Michel, the standard variety of banana then. Called Panama Disease or Fusarium wilt, the fungus spread from Panama, where it originated, to Costa Rica, then Guatemala, and ventured further south into Colombia and Ecuador. The disease annihilated the Gros Michel by the 1950s, and was estimated to have cost $2.3 billion worth of losses.

The Gros Michel was then replaced by the Cavendish banana, the most internationally traded variety now, and the only one most of America and Britain has ever tasted. However, another strain of Fusa­rium wilt, Tropical Race 4 (TR4), is now threatening the Cavendish, and has gen­eticists and scientists across the world scurrying back to their laboratories.

TR4 has already ravaged farms in Taiwan, where it was first spotted in 1990, and moved westwards while consolidating the eastern front. Cases have been found in China, Malaysia and Australia while the virus spread to Mozambique in 2013, Lebanon and Pakistan in 2015, to Israel, Laos and Vietnam in the following years, and to Myanmar this year.

India, the world’s largest producer of bananas, was a prize frontier. But it seems to have fallen—rendering vulnerable most of its 29,779.91 thousand tonnes, which account for 29.19 per cent of all global production. In 2016, a report by R.Thangavelu, the principal scientist of plant pathology at the National Research Centre for Banana, Tiruchirapalli, was devoted to surveying the damage. Titled ‘Status report on Fusarium wilt disease in India’, it said crops in the Latehar and Purnea districts of Bihar had been ravaged—a “perennial system of cultivation, especially in Bihar…continuous cultivation of the same variety in the same field” had contributed to further incidences. No wonder those banana farmers in Bihar have since shifted to maize.

The TR4 strain is now being seen in Faizabad and Barabanki in Uttar Pradesh. Devendra Verma, a farmer in Barabanki, says cases have increased over the past three years and “this year was the worst”. He describes the fungus as something that “eats up the plant from the inside”. The name, Fusarium wilt, is fairly literal—it makes the plant wilt, sucking the life out of it by clogging it from its roots.

What’s worse than thousands of tonnes of crop being vulnerable to a new disease? The soil. “Once the soil is affected, that pathogen will stay for thirty years,” a scientist with NRCB tells Outlook, pleading anonymity. Besides, the fungus can easily spread by contact. “If we use even water from the area, it easily spreads…or even when tractor tyres go through the area,” says the scientist. Researchers in the West suggest the high mobility of banana technicians is contributing to the epidemic. They are also probably thanking the heavens that the new strain hasn’t hit Latin America, home of the ‘banana republics’ that account for about 80 per cent of its exports.

India sets much store by it too. The ban­ana industry here is worth about Rs 50,000 crore; production increased by a whopping 1,477 per cent between 2005–06 and 2010–11. According to the NRCB, out of about 360 varieties of banana grown across India, between 55 and 60 per cent of the land under cultivation, and 65 per cent of production, is now of the Cavendish variety—both figures having doubled over the past decade. It has become the staple banana in north India. It’s there on your breakfast table. 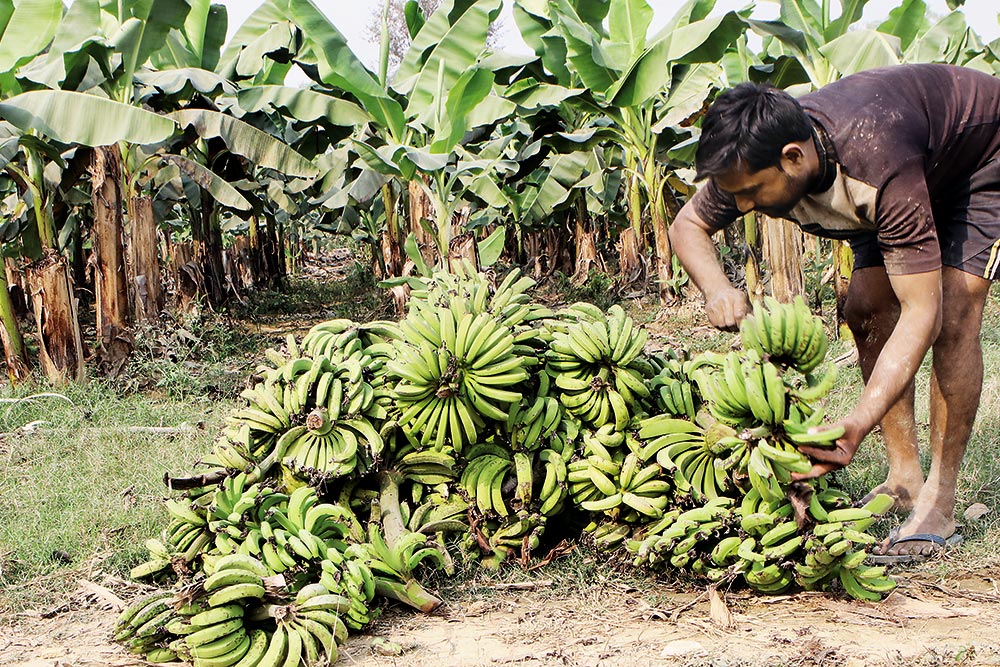 Photograph by Suresh Pandey
“The TR4 strain may also have hit indigenous varieties, which may otherwise be integral to finding a solution.”

Since banana is a monoculture crop grown round the year in most parts, the Cavendish’s susceptibility to the disease may lead to unforeseen damage. Sources within the NRCB say the government doesn’t want “panic” among farmers. The scientist says the government is taking “internal domestic quarantine measures” and sensitising farmers about the “devastation it can cause”. However, there is still denial. B.V. Patil, president of the Banana Grower Association of India, says reports of Fusarium wilt are “false”.

In the 105-page annual report of the NRCB, the words ‘Fusarium wilt’ popped up 52 times—itself an index of the ­concern. The ‘Job Opportunities!’ tab on their website has two posts up for grabs, those of researchers, with the senior ­research fellow to work on a “Colla­borative research project on breeding for improved bananas with Fusarium Wilt (Fusarium oxysporum f.sp. cubense) resistance”.

Awareness on the ground is pretty low. Farmers Outlook spoke to are certainly in the dark. Scientists are at another level of vexing mystery—there’s no sure-shot cure yet, and they’re still trying to devise one. They are also worried that the hoo-haa over TR4 may obscure its older cousin, TR1, which ravaged the Gros Michel. “Everybody is fretting about TR4, while it’s TR1 that’s affecting the Grand Nain in southern states. If you see in Tamil Nadu, the Tirunelveli area is much affected by TR1. It has spread to Karnataka and Maharashtra, and we have recorded cases even from Madhya Pradesh and Gujarat. Earlier, the Grand Nain was not affected by Fusarium wilt, but now different strains are affecting it,” says the NRCB scientist.

Even more troublingly, the strain may also have hit indigenous varieties, which may otherwise also be integral to finding a solution. "TR4 is a dangerous strain," says Dr Anita Cherian K, professor and head of the department of plant pathology at the Kerala Agricultural University. "We are conducting a survey to check if TR4 is present because it could attack Cavendish. Right now we don't have it. Nendran, which belongs to the plantain group, shows symptoms of Fusarium wilt, which could be suspected to be TR4," she adds. However, the NRCB says that the plantain is not susceptible to the TR4 strain of fusarium wilt. Nendran is Kerala’s iconic variety—bestowed with a GI tag and source for the famous banana chips.

“There’s a gene in some wild species and traditional bananas in India that’s resistant to Fusarium wilt. We have done extensive work, planted all varieties in Bihar and screened them so we know exactly which types of bananas are tolerant to this strain of Fusarium wilt,” says the NRCB scientist. If traditional ban­anas show resistance, those can be promoted. “And if it’s a wild banana, a seeded one, we can identify the gene and extract it.” Developing a new, fortified banana will take time.

"It’s a manageable disease," says agricultural scientist Vasanth Kumar Thimakapura . He speaks from experience, having tackled Fusarium wilt in the Nanjangud Rasabale, a variety of banana that takes its name from Nanjangud town near Mysore. " The disease is a big problem in the area. It’s difficult to manage once it comes in," he says. The disease can also spread through the air, a worrying thought.

Mainly, the disease spreads through the suckers, the lateral shoot responsible for propagation. “That can carry the inoculum. It can also move through irrigation water,” he says, adding that farmers have to follow an integrated management practice to treat the disease. “We have to understand the disease mechanism and also the host, the plant. When the old roots are infected, only then do you see the symptoms. By that time, most of the root has been damaged. So, if you treat with a fungicide, it only kills the pathogen—the plant will not survive because the roots are dead,” he says. A treatment mechanism must ensure the plant will produce new roots. “On one side, you have to kill the pathogen and on the other, the plant has to overcome the damage,” he says.

There is also the question of the ‘wilt-proof’ GM variety of Cavendish, with a culture being cultivated in Australia. “Bringing in GM banana will not be easy, policy-wise too. Anyway, we have traditional bananas that have this gene,” says the NRCB scientist.

A solution to what The Guardian called ‘Bananageddon’ in a piece earlier this year can only come through a mix of awareness, research and application. Crop rotation is said to have been effective in China, and more vegetated ground cover, enabling greater diversity, is also said to provide resistance. Scientists in Taiwan are working towards bringing in a resistant culture. As of now, though, there’s an elephant in the room: that animal’s favourite fruit is in danger.

Scourge Under The Skin

Fray Before A Fight