Caught between the party and its allies, the PM jostles for space 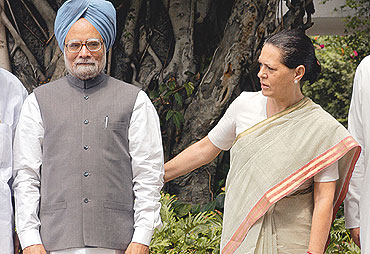 outlookindia.com
-0001-11-30T00:00:00+0553
When prime ministers are reported to be "deeply unhappy" and "on the verge of putting in their papers", the nation must sit up and take notice. The last few weeks have arguably been the lowest point in the prime ministership of Dr Manmohan Singh. The problems of running a huge, unwieldy democracy apart, there was a buzz in Delhi's corridors about his troubled state of mind.

The immediate provocation for the "unhappy PM" stories may have been the DMK's threat to pull out of the UPA if the divestment of the state-run Neyveli Lignite Corporation was not put on hold (the DMK's headbutting resulted in the entire disinvestment process being stalled). But this time it was not just the allies or even the Left parties making the PM's life miserable. The real problem was mounting tension between the PM and his party. As many Congressmen saw it, an apolitical prime minister had been taking too many policy positions for which there would be a political price to pay. In grand old Congress tradition, there continue to be several views on the Indo-US nuclear deal, the petrol hike leading to escalating prices, the PM's ambiguity on reservations, disinvestment, economic reforms and even the proposal to build a security shield around the disputed site at Ayodhya.

Since it is another fine tradition in the Congress that all good news must be credited to the Gandhi family, and all bad tidings blamed on lesser mortals, the prime minister had become the focus of Congressmen's ire. His position was not helped by the fact that Congressmen admit that as far as mass politics go, this PM simply does not count. Says a party general secretary: "For a while now it had been felt that the party's voice should be heard. Now Soniaji has allowed us to speak loudly on issues like the price hike even if it meant criticising Manmohan's dispensation. The purpose is to keep the PM on tenterhooks."

If the PM's independence has been undermined, many Congressmen say it is not necessarily a bad thing. But Janardan Dwivedi, the powerful general secretary, is at his diplomatic best: "Here is a PM who is honest and wants to serve the country. Why raise such issues? There are consultations in an alliance but no differences between the party and the PM. There is no acrimony between Mrs Gandhi and the PM. All rumours about the PM's unhappiness are absurd," he told Outlook. Jairam Ramesh, MoS Commerce, is more direct: "How can a political party remain insensitive to rising prices? If this exercise has resulted in the party rediscovering its voice, then it is good for both the government and the Congress. As for reports of the PM quitting, I will just say rubbish. From my position, I never saw any disrespect being shown to the PM."

Indeed, partymen turn around and say it were the stories of the PM's unhappiness, allegedly put out by the PMO, that really muddied the waters. Says a veteran Congressman: "I believe that the PM is ill served by his cheerleaders." But Congress spokesperson Satyavrat Chaturvedi had this view: "It is journalists who are saying that stories are being planted about the PM. Since I have no knowledge of a PMO member briefing journalists, I will not comment. In an alliance there are bound to be differences. But if the PM has put the disinvestment process on hold it is not because of any pressure but because he thought it prudent to consult allies."

One outcome of the events of the last few weeks has been to reinforce the primacy of the CMP. Sources close to Sonia Gandhi say she wanted to get the message across that the CMP was sacrosanct. Other partymen believe that the Congress will now be consulted on major policy issues. But sources in the government retort "policy cannot be formulated by a panchayat". Party sources say that the issue of FDI in the retail sector could be the next point of conflict.

It is because the Congress covers a wide ideological spectrum, from the left to the right, that a tug of war on policy issues continues. Besides, Congressmen are not happy with the Left taking credit for all the 'aam aadmi' initiatives. Sources close to 10, Janpath say Sonia is "sensitive" to this and wants to project a populist face. Perhaps that is why Jairam Ramesh today says that "the Congress has always been a left-of-centre party. The PM himself is left-of-centre."

But cpi general secretary A.B. Bardhan would beg to disagree. "Manmohan Singh, Chidambaram, Montek Singh are dogmatic right-wingers. They have convinced themselves that they have understood the key to the world's development. Their agenda is often dictated by Washington. As for the Congress, it is a party that drifts." The Left leaders and several Congressmen point to what they see as a flaw in the PM's style of functioning. Says a Congress veteran: "Arithmetically and politically, the Congress does not have the same clout in the UPA as the BJP had in the NDA. The BJP built a better mechanism with the allies".

Left leaders reveal that their coordination meetings with the UPA are becoming increasingly acrimonious. But at least they take place. It is the allies in the government who are rarely consulted, in the manner in which the NDA leaders would frequently meet. It was only on the issue of reservation that allies like Laloo Yadav were asked for their views. Otherwise Laloo, who leads one of the biggest parties in the UPA, is never asked about policy initiatives. He is only encouraged to hold forth on the railways.

Many Congressmen complain that the PM is a great accountant obsessed with balancing the books. But such criticism might be a tad unfair since it was precisely for this reason that he was selected for the job. There could also be a linkage between the prime minister's troubles and the fact that economic problems are mounting. The honeymoon with the middle class may have come to an end, although the Congress consoles itself with the hope of keeping the 'aam aadmi' constituency.

But Indian politics is too fractured now for any party to make such lofty claims. As for the problems between the PM, his party and the allies, the crux lies in the inherent nature of the dispensation that rules from Delhi. For all the fine qualities he possesses, Manmohan will continue to be troubled by the fact that he is a prime minister who does not command the full authority of his office. Occasionally, his party will remind him of this.

Everyone's Called To The Buffet