No Lilies For Ishrat

An assassination plot, a highway blowout, a dead college girl. What was she doing there? What really happened on the morning of June 15 in Ahmedabad? Updates 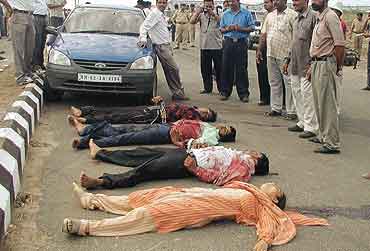 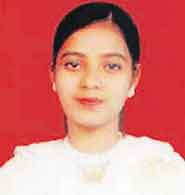 Ishrat Jahan Shamim Raza was just a 19-year-old college student from Mumbra, a predominantly Muslim suburb 50 km from Mumbai—till she was shot dead in a June 15 police encounter in Ahmedabad. And though three others were killed that day, the incident continues to be in the eye of a controversy, embarrassing both the Maharashtra and Gujarat police no end because of her presence. It hasn't helped that days after Ishrat, 'mastermind' Javed Ghulam Sheikh and two alleged Pakistani nationals were killed in the pre-dawn encounter by the Gujarat police, the investigating authorities in both states were still to show up any concrete evidence to substantiate the quite serious charges. The authorities claim the group was affiliated to terrorist outfit Lashkar-e-Toiba and was on a mission to assassinate Gujarat CM Narendra Modi.

In the case of Ishrat, the evidence on record does fly a bit in the face of the public perception of her. Indeed, Mumbra had shut down for two days to honour her. The collective mourning was complete, with burkha-clad women pouring out in thousands for the funeral procession. People were agitated that their suburb was targeted and that one of its most "innocent and hard-working girls" was linked to a terrorist plot. Not just Ishrat's family but teachers, neighbours, principal of a coaching class where she taught, her tuition students, they were all aghast that a shy, studious and non-political Ishrat should be branded a terrorist. By all accounts, Ishrat was near-perfect. The eldest of seven siblings, she woke up at dawn, studied, travelled 35 km to and from Mumbai's Khalsa College to do her BSc, taught children and even helped her mother with tailoring-embroidery to supplement the family income after her father died two years back. "Where did she have the time?" asks sister Mashrat.

It's not time but her inclination that's important here, say police from Thane-Mumbra and Ahmedabad on whom lies the onus now to establish the conspiracy links. There are many questions about Ishrat which do point a needle of suspicion. Even if she wasn't involved in the 'assassination plot', she did have a few dubious links.

For example, what was she doing with Javed and why did she go with him to Ahmedabad five times last month? And what of the diary she maintained from May 2003 which contains incriminating details of money transactions and the plot to assassinate Modi? Why did she receive Rs 4.8 lakh and pass on Rs 1.6 lakh to one of the Pakistani nationals? Why did she lie while leaving her Mumbra home, telling her mother she was going to an aunt's house even as she told her sister she was headed to a friend's? Why didn't her mother file a missing persons complaint when Ishrat didn't return for three days? And why did she first say she didn't know Javed, only to change her mind later?

"These and other questions suggest that Ishrat had some motive...we will establish what it was," says Thane DCP Amar Jadhav. The diary, along with an AK-56, ammunition, a satellite phone and hundreds of coconuts were found in the car the group was travelling to Ahmedabad in. But in the absence of forensic analysis of the diary, the investigation has only led to more questions: why would someone on a sinister mission carry a diary that details everything on her person. And indeed, how was it established that it was Ishrat's diary?

The contradictory police statements are another minefield. The Mumbra local police and Thane district police maintained for five days that they did not have any evidence of Ishrat's links to any terrorist organisation, let alone the LeT. They fine-combed their records but could not attach her name to any criminal activity. However, on the sixth day, the Intelligence Bureau dropped a bombshell: it said that Ishrat had been on their watchlist for the last six months. Soon, the Mumbra and Thane police too was speaking of her "suspicious movements".The story was the same in Pune where police commissioner D.N. Jadhav had initially said, "We have traced Javed's chain of contacts and friends but haven't found any direct link to the LeT". Later, he asked the Ahmedabad police to probe terrorist links and even sent them a report on this.

Ishrat's companion Javed is a more clear-cut case. He was once Pranesh-kumar Pillai from Kerala, an electrician, who converted to marry his love, Sajida. He operated under three aliases and two passports. The Dubai-returned Javed had five assault cases against him and was known to be a local dada in Mumbra where he lived before moving to Pune. He had dropped off his wife and three children with a brother-in-law in Ahmednagar five days before the encounter. His links to the LeT are outlined in a report submitted by the Gujarat police to the Union home ministry. Even if the Modi conspiracy doesn't hold water, there's no doubt the group was up to something sinister, and Ishrat was an ideal cover. "This would have been just another encounter if not for the girl's image," says a Thane senior officer.

Precisely why perhaps the politicians have been extra-quick to cash in. The Samajwadi Party's Abu Asim Azmi helped bring back Ishrat's body. Ex-minister Hussain Dalwai of the Congress was also in Mumbra. The ncp's Vasant Davkhare, former vice-chairman of the state legislative council, gave Rs 1 lakh to the family. (Ishrat's mother later returned the cheque.) The funeral saw political speeches too. Enraged at this "consolidation of the Muslim vote", Shiv Sena chief Bal Thackeray called for a consolidation of the Hindu vote. The Sena's Thane leaders, including MP Prakash Paranjpe, took out a morcha demanding that Azmi, Dalwai and Davkhare be booked under POTA for "abetting terrorist activities". Even the BJP national executive repeatedly referred to the case to show how pseudo-secularism was helping terrorism.

But even as the political angle hotted up, the police investigation still seemed on shaky ground. The Thane and Mumbra police have detained 24 people, hoping interrogations will lead to some conclusive evidence. So far though, it's all been circumstantial.

Food With A Past