Unlike in the West, where the issues seem a bit superficial to us, Indian politics, as seen from ground zero, has little chance to raise laughs. 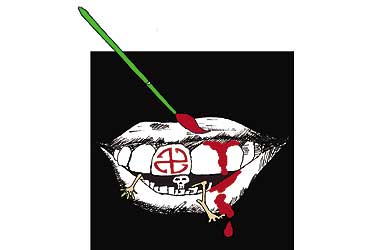 outlookindia.com
-0001-11-30T00:00:00+0553
At the fag end of his life, cartoonist O.V. Vijayan is filled with despair and disillusionment. To admit to hopelessness must surely be a moment of anguish. Hope is one of the virtues that define a human being. To abandon it is to hide in a dark cave, to surrender to darkness. The sense of doom is reinforced by religious teachings, which describe despair as a dangerous and contemptible "sin". To succumb to despair is to be bereft of faith and such a person is a heretic, condemned by society. Cassandras are never popular because nobody wants to hear bad news. We all like to cling to hope. It's necessary for our survival, helps us fight odds and brave on in life despite setbacks. Hope has moral and religious sanction. That's why we have made hope fashionable and politically correct.

It takes enormous courage to go against public grain because you know you will be vilified, misunderstood. That Vijayan has chosen to write a testimony of despair is a remarkable act of courage. Because it is also a testament to truth: there is nothing really funny about Indian politics. For the serious, thinking, feeling political cartoonist, it is difficult, if not impossible, to raise laughs.

At the superficial level, there is plenty to caricature—the clownish antics of a Laloo Prasad Yadav or the imperious diktats of a Jayalalitha are a cartoonist's delight. Quirks or physical attributes of politicians (like Indira Gandhi's long nose) are eminently lampoonable. But these do not constitute politics. Corruption, scandals, injustice, hatred, dissidence, duplicity, defection, maladministration—this is what constitutes the bulk of our politics. Are any of these funny?

A serious political cartoonist is not a comic strip artist, raising laughs by highlighting the foibles and follies of people. His wit is on a much higher plane than the slipping-on-banana-peel variety slapstick humour. He has to make you think, not compulsorily laugh. He is a satirist who holds a magnifying glass to everything happening around him. He blows up the flaws, contradictions and hypocrisies and depicts it in such a mordant way that the truth hits us right between the eyes. In blowing up the oddities and blemishes of our political life, he is not distorting, but magnifying reality. Often, he does it savagely, drawing as much blood as laughter. Pulitzer prize-winning cartoonist Jeff MacNelly once said, if they couldn't draw, most political cartoonists would probably have become hired assassins. Not surprisingly, political cartoonists usually tend to be sharp-witted iconoclasts with strong killer instincts and rapier tongues.

Categorising people into First and Third World stereotypes is false and artificial. But we in the Third World constantly do deal with issues too tragic to be funny. Political cartooning is a refined art, especially in the UK, France and the US. But let's face it, those societies don't have to worry about the basics, which we still grapple with. Hunger, disease, inequality, exploitation, poverty—these are life-threatening issues in the Third World. Political cartooning in the West is brilliant and funny, but the issues, judged by our standards, often seem superficial. Perhaps that's why they are so hilarious. When they attack serious issues, they too aren't particularly funny. American Civil War era cartoons were more disturbing than amusing and recent French cartoons against right-wing leader Le Pen were vicious rather than funny. There's something obscene about poking fun at political reactions to economic disparity or violence against women, issues we continually contend with.

R.K. Laxman is the only Indian cartoonist who pokes fun at the waywardness of our politics and successfully raises laughs. His humour's gentle but brilliant.Readers identify with his puzzled common man, wondering at the venality of politicians, the absurdity of their situation. But his common man, like most of his readers, is to an extent, an outsider, a detached observer. He is not in the situation. It's the liberal observer's perspective, concerned about what is going on around him. But it's not the victim's perspective from within. Real victims of corruption, red tape or violence won't find the situation funny.

Vijayan sees people and situations from within. And the view from within is wretched, disturbing. Certainly his angst has been aroused by disillusionment with Communism, the god that failed. But the despair is equally induced by politicians, those gods with feet of clay. Some people are doomed to see the world from within—they write, draw, report, work from within than observe from the outside. Their contribution is powerful precisely because the anguish of the sufferers permeate their souls. People who have experienced Indian politics from ground zero, from famine-stricken villages and battle zones, from legislatures and bombed sites, from wrecked huts and ruined homes, would share Vijayan's pain, his inability to raise laughs. The middle class can get defensive, say but there are a lot of good things happening too. Sure there are, but they don't substitute, make up for or cancel out the bad things.

Besides, most good things have happened despite, and not because of politics. The middle class can opt for denial, walk away from the disquieting reality, switch on their TV sets to immerse themselves in glossy Bollywood extravaganzas. But there are millions out there, trapped in a reality from which there is no escape. Seen from their perspective, politics is no laughing matter. And that can fill a thinking, feeling person with much despair.

News, like history, seems ill-fated to repeat itself. And it only seems to get worse. The anti-Sikh riots were terrible, Gujarat was worse, Harshad Mehta was a scandal, Ketan Parekh is a bigger scam, the Latur earthquake was devastating, but the Gujarat one was even more so, Bofors was bad but Tehelkagate is ghastly. Are any of these laughable issues? They are tragic, absurd. But they are not funny.