No Land In Sight

Conservative Fijians are back at the helm, Indians get the jitters 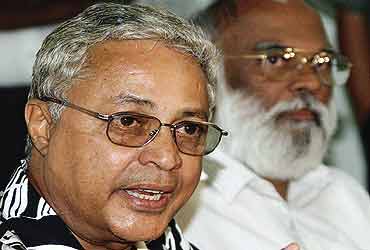 outlookindia.com
-0001-11-30T00:00:00+0553
As the Fiji election results continued to trickle in through the week, the disillusionment of Indians there began to mount steadily, stoking fears of further marginalisation under a coalition government expected to be dominated by conservative indigenous Fijians.

Interim prime minister Laisenia Qarase's Soqosoqo Duavata ni Lewenivanua Party (sdlp) has forged ahead of Mahendra Chaudhary's Fiji Labour Party (flp), bagging 31 of the 71 parliamentary seats, as against the latter's 27. The Conservative Alliance of George Speight, who deposed Chaudhary in a coup and is in jail currently, has managed six seats and is prepared to support anyone who releases him and the others involved. While the sdlp hasn't ruled out a coalition with the Conservative Alliance, Qarase's first option would be to rally together a clutch of smaller parties and independents, who together account for a crucial six seats.

The verdict has been a big disappointment for the Indian community. Says Dr Satyendra Narain, professor of sociology at the University of South Pacific, Suva, "We expected the election would be a return to democracy of some sort, but it doesn't look like it now. Parties with extreme views against Indians have come to power. It's hardly a situation favourable to the Indian community, whose rights have been progressively diluted since 1970."

Qarase attributes his party's success to its stand on amending the 1997 constitution, initiating affirmative action in favour of the Fijians. An Indian, on condition of anonymity, says, "They'll go all out to pursue anti-Indian measures, which can be passed through a simple majority in the House."

Chaudhary, however, hasn't thrown in the towel yet. Alleging that the elections were rigged, he plans to file papers in the High Court demanding a re-contest in five of the open seats. Inordinate delays in beginning the count, particularly in the Central Division, the bringing in of unverified postal ballots suddenly into the count, the extremely high number of invalid votes (67 per cent nationwide) and the uniformity of ticks on ballot papers have raised doubts about the conduct of the election and the neutrality of the officials.

As Dr Prasad, whose family has been in Fiji for three generations, says bitterly, "When the trend had set in that the flp was amassing a huge margin, especially in and around Suva, voting was deliberately delayed. Even Indians were made to believe that if the flp comes to power, there would be widespread riots. But Fiji doesn't have a tradition of spontaneous riots. They are mostly engineered by those who lose power."

The election results also show that Fiji's population voted along racial lines, a tradition since Independence. Organisations such as the Citizens Constitutional Forum (ccf) have called on the two principal parties—the flp and the sdlp—to work together towards a multi-party government as prescribed under Section 99 of the 1997 Constitution.

Under it, Qarase is required to invite the flp to join the cabinet. Any party with more than eight members in parliament must be represented in the cabinet in proportion to the seats they hold. Says ccf spokesperson Ponipate Ravula, "The formation of a multi-party government isn't just a legal requirement under Fiji's constitution. It is also important to heal the wounds of the country's multi-ethnic communities and unite the nation."

But a multi-party government seems unlikely, given the ideological differences between the two leaders and the fact that the Fiji Constitution can be amended easily. Ethnic Indians are also apprehensive of the economic consequences of the poll verdict. Qarase has repeatedly stated that the present land lease arrangement is discriminatory against indigenous Fijian landowners. He wants to introduce a legislation diluting the protection tenants enjoy. This spells a bleak future for Indian tenant farmers, who say the rentals paid on land are already too high compared to the income they derive from growing sugarcane.

With indigenous Fijians cornering most of the top and middle-level government jobs and the disappointing election results, another wave of migration of Indians from Fiji is expected. In the past 15 years, about one lakh Indians have migrated. Indeed, true democracy still remains a distant dream in this picturesque South Pacific island nation.