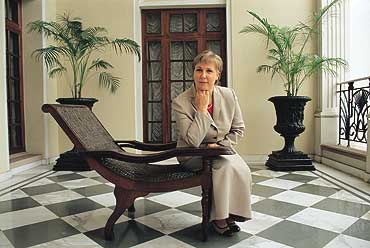 outlookindia.com
-0001-11-30T00:00:00+0553
Christina B. Rocca is America’s pointsperson for South Asia, an important front in President George Bush’s war on terrorism. This is the area where Osama bin Laden scours the mountains, and two nuclear states spar with each other. Her voice, though, is in contrast to her tough job: so soft-spoken that you have to strain to hear her, so polite you wonder why she is considered hard as nails, so diplomatic in her response that you feel she’s evasive. Here in New Delhi to attend the annual Regional Dialogue, the US Assistant Secretary of State for South Asia took time out on September 11 to speak to V. Sudarshan—and even pose charmingly for our lensman. Excerpts:

Can you tell us something about the regional dialogue you have just had?
It’s something that started last year. In our conversations we express our positions, our views on events in the region and on India, and get Indian views as well so that there’s better understanding between us on what our policies are. It’s also an opportunity to build on those areas that we have already identified, Afghanistan being a case in point.

What’s happening in Afghanistan, security-wise? Reports are that a couple of Pakistani officials have been arrested in Zabul province fighting alongside the Taliban....
I don’t think we have any information that confirms that at all, unless something has happened in the last few hours. Overall, we think Afghanistan is moving in the right direction. What we are concerned about is the security situation. It’s a fragile security situation and we will be stepping up our assistance.

There have been reports that information and documents relating to terrorist incidents against India, including the IC-814 hijacking in December 1999, have been collected both in Kabul and Kandahar. Have all these documents and information been shared with India?
I think this is happening in channels other than mine. I know that the US wants to cooperate with India across the board on all terrorist issues.

Last year, India requested the US for technical data specifications on the Patriot-3 missile system as well as Arrow. Have those specifications been shared with us?
The whole question of Arrow is one which is still under negotiations. There are MTCR (Missile Technology Control Regime) concerns related to Arrow. These have not yet been resolved.

What about Patriot-3?
I don’t think that has been resolved either.

There is a feeling in New Delhi that the US is not conveying a strong enough message to Pakistan to leave Afghanistan to the Afghans. Is this feeling justified?
In our view, we are working very closely with Pakistan in the war on terror. We are working very closely with Pakistan to deal with those arms (of the government) that are not being very helpful with respect to Afghanistan. We have set up a trilateral commission between Afghanistan, Pakistan and the United States to help deal with these specific issues. It’s absolutely on top of our agenda.

It is now two years since September 11 and almost that period since the December 13 attack on India’s Parliament. Terrorist incidents are still going on against India. Is Pakistan doing anything at all in trying to curb it?
Let me not speak for another government. It is two years since 9/11 and (when) the war on terrorism began. President Bush said just yesterday that this is not a war that will be over quickly. All countries will need to participate in this. Pakistan is one of the countries willing to help us.

But is it doing enough?
Efforts are being made and I also think there’s room for more. Even one death is too many. Violence is absolutely unacceptable.

Are you going to convey this message to Pakistan during your visit?
We convey it and we are going to continue to do so. I just want to make it clear that the US is with India on the fight on terror.

India has insisted on a complete cessation of cross-border terrorism from Pakistan before resumption of dialogue. Is that a reasonable stance?
India has taken very important steps towards normalisation. We continue to believe that the initiative that the prime minister (Atal Behari Vajpayee) took in April was an act of great statesmanship. There have been moves across the board, there has been improvement, there has been a definite change in intention. The high commissioners have gone back, the bus routes are back, the people-to-people contacts are increasing, the sports are now back on the agenda. These are all steps in the right direction and we commend India for these steps.

On troop contributions to Iraq, do you have a clear sense of what exactly India means by an ‘explicit mandate’? Do you think UN Resolution 1483 was not explicit enough?
Let me back up a little bit and say that despite all the headlines today, Iraq was not the objective of my trip here. The US position on (UN Resolution) 1483 was that we thought it covered it (in terms of explicitness) but clearly every country is seeing this differently. So we are looking at it again, I can’t give you the latest status because there are negotiations ongoing right now.

Have you sought a view from India as to what kind of language the resolution ought to contain?
We shared the language of the resolution with the Government of India and we are looking for comments from all our partners.

And has the Indian government given a view on the language?
As I said, the negotiations are ongoing in the UN.

Some here feel that New Delhi has given the US a runaround on the question of contribution of troops to Iraq. Do you think this is the case?
We have had very good conversations with the Indian government on this issue. Ultimately, the decision (here) will be made based on Indian interests in the same way that ultimately US decisions will be made based on US interests. We have very good relations with the Indian government, and it transcends this one point. But I don’t know if ‘runaround’ is the right way to characterise it.

While the debate on Iraq was on, one of the subtexts emerging out of Washington was what India could do for the US on Iraq. If I invert this and ask what has the US done lately for India, how would you respond?
I am going to dispute the premise of the question. We have a relationship with India, first of all, that is quantitatively beyond I’ll-do-something-for-you-you-do-something-for-me. Really, this is a relationship essentially in the direction of global partnership. I don’t think there’s a tallyboard anywhere that is being kept or should be kept.

When our national security advisor Brajesh Mishra was in New York and addressing the American Jewish Congress, he brought up this idea of an India-Israel-US trilateral axis. What do you think of it?
There is no axis as such. The US has a good relationship with India, and has a good relationship with Israel. We are always happy when friends make friends with each other. But there is no axis.

The idea is that if there was a better understanding between the three countries, it would be easier to free up technologies. For instance, in the case of Arrow.
That’s an area we can look at and work on.

Your previous ambassador here, Robert D. Blackwill, was not a very popular man. Some did think he did great things for bilateral relations, but he rubbed most others the wrong way. What would you say to this?
Our position is that Ambassador Blackwill was a very effective ambassador to India. We were sorry to see him go. We are happy to have him in the White House and to be able to still take advantage of his energy and big thinking.