No Hate Politics (This Is India)

The 'pseudo-secularists' have won. And won stunningly. The small print in the triumph ("victory" is too soft a description) is breathtaking. Savour. 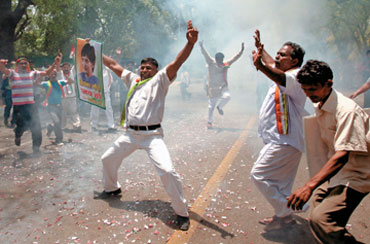 The people have spurned the divisive, negative, low, petty, self-defeating, erratic, irrelevant politics of God’s Own Party. The BJP, which is very good and very swift at introspection, has much to introspect about. For the sake of the party, I hope the inevitable clamour for returning to Hindutva is resisted. If the BJP, already wounded, goes back to Ram mandir type mobilisation, the return could be fatal.

The proposition that Oppositions don’t win elections, governments lose them, is in trouble. This time the Opposition lost unilaterally. Already, there is much soul-searching. "What went wrong?" is the chorus heard in the corridors of 24, Ashoka Road. Let me flag a few howlers.