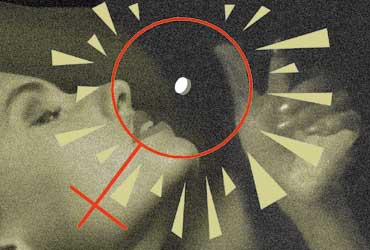 Controversy continues to dog the contraceptive pill. While apologists claim the advanced versions are more benign, even protective against certain diseases like osteoporosis and bowel cancer, than their antecedents, detractors seem unconvinced. Even as most of the developing world remains uninvolved in this debate, it has spilled over into courtrooms in the West. Currently, more than 100 women in the UK are suing three pill-makers for not warning them of its potentially lethal side-effects. They claim the supposedly safer third generation pill caused them to develop blood clots which led to long-term damage to their health, even resulting in death in 10 per cent of cases. The case is unprecedented and, if successful, could lead to huge compensations to the tune of 10 million pounds.

In line with the claims of the British women, a Norwegian study announced at the recently held European Breast Cancer Conference in Barcelona reckons that by popping the pill, a woman could be increasing the chance of breast cancer. The research, based on data collected from 1,03,000 women aged between 30 and 49 in Norway and Sweden, shows that women who had taken the pill over longer periods increased their risk of breast cancer by 58 per cent compared with those who never used it. Women over 45 years of age still using the pill increased their chance of getting the cancer by 144 per cent.

Some researchers/entrepreneurs are apparently making the most of this confusion. US researchers at the Eastern Virginia Medical School have just developed a new form of the contraceptive pill which could cut a woman's monthly periods to just four in a year by extending the monthly menstrual cycle to three months. The new pill, called Seasonale and not yet approved, is a combination of two commonly-used hormones already available in various dosages in oral contraceptives. The side-effects, claim the researchers, should be the same as for any birth control pill.

And just last week, Europe approved for use the first-ever contraceptive patch. Called Evra and manufactured by the Dutch pharma Janssen-Cilag, the patch was found to be as effective as the pill, besides having less side-effects. The patch contains the same hormones as the pill, but in lower quantities. This is because they are absorbed straight into the bloodstream, rather than having to go through the digestive tract as happens with the pill. The patch would need to be changed once a week for three weeks. Then the woman wears no patch during her normal menstrual period before starting again. It has been designed to stay on while bathing and swimming.

Mothers who want their babies, particularly those weighing less than three kg, to grow into smart, intelligent kids would do well to breast-feed exclusively for at least the first six months, suggests a new study. Small infants who received only breast milk for the first six months of life scored an average of 11 points higher on IQ tests at age five than infants who received formula and solid food in addition to breast milk, according to researchers. The study, conducted by a team of US and Norwegian scientists, and published in the March issue of the journal Acta Paediatrica, adds fuel to the controversy over the 'intellectual' benefits of breast-feeding. The findings also refute the notion that small babies will grow faster if they receive some formula and solid food from early on, the study points out.

After the Indian drug company Cipla gave MNCs a run for their money by producing the cheapest AIDS drug AZT, now Thailand has produced the cheapest ever anti-HIV "cocktail" drug. It is a combination of three anti-retrovirals—nevirapine, stavudine and lamivudine. These do not cure AIDS, but can slow down the march of the virus and improve the patient's health and quality of life. The government says that the cocktail, named GPO-Vir, will be sold for just $0.45 per pill, meaning a month's supply of the drugs would fall from $114 per person to just $27. To be sold in state hospitals from April, the single-pill treatment could have significant implications not just for Thailand but also for developing countries, which may be able to import the cheap generic drug. Thailand is only the second country, after India, to produce a generic form of the cocktail drug, originally created by three Western pharmaceutical companies. None of the three companies hold any patents for the drugs in Thailand or India any longer.

Air pollution causes the blood vessels to narrow, even in healthy people, scientists have suggested for the first time. The finding may explain why air pollution appears to increase the rate of heart attacks in people with heart and blood vessel disease, something which urban Indians will readily testify. In the study at the University of Toronto, 25 healthy people inhaled high concentrations of fine particles emitted from burning fossil fuels in cars and factories, plus ozone for two hours. The fine particles caused the blood vessels to constrict while ozone did not. The research, published in Circulation, a US journal, however, needs to be replicated with more people for greater certainty.

"The Man On The Spot Has Ample Powers"