No Free Lunch At Fan Clubs 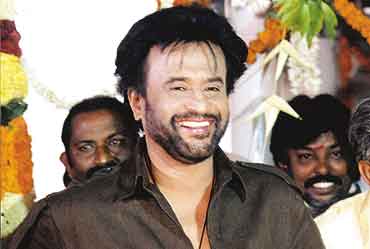 The ubiquitous presence of fans and visible signs of their activity off screen is accompanied by the tendency of films to continuously remind the viewer of the star status of actors. Rajnikanth and Chiranjeevi routinely salute, wave and wink at the camera. Vehicles of major stars incorporate sequences that foreground their phenomenal popularity in MGR's Rickshawkaran (1971). There is a sequence quite early in this film in which the star rickshaw puller is surrounded by hundreds of people, garlanded and blessed by common people. As viewers, we are not meant to forget that this is no ordinary rickshaw puller. In recent films, stars are often show in the midst of wildly ecstatic people. In Samarasimha Reddy and Ubdra featuring Balakrishna and Chiranjeevi respectively, we see the stars travelling in open jeeps and waving at thousands of people—real people filling every square inch of the frame. Evidently, these are signs of their drawing power.

All this would suggest that our stars have complete control over their fans. After all, fans are self-proclaimed worshippers of their idols. The intimate relationship between the star and his fans is more complex than cozy. There is an interplay of various factors in the organisation and functioning of fans' associations. Injunctions from the star are not always effective. Since there is a popular misconception that the South Indian star is a politician in the making, it would be interesting to look at instances when fans do become involved in politics.