Home  »  Magazine  »  International  » Interviews  » interview »  'No Formal Alliance, But A Very Rich One'

'No Formal Alliance, But A Very Rich One'

The US ambassador is disappointed at the reportage from Pak-obsessed Indian media. 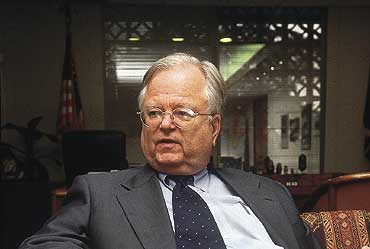 outlookindia.com
-0001-11-30T00:00:00+0553
Two days after US ambassador to India Robert D. Blackwill delivered a seminal speech on Indo-US relations to the Delhi Policy Group at the Habitat Centre, New Delhi, he seemed disappointed at how the media reported it. He tells V. Sudarshan what the Pakistan-obsessed Indian media missed out. Excerpts:

What do think about the media coverage of your speech?
It was a speech largely about the US-India relationship but the media mostly concentrated—as always in India—on Pakistan. If you were to give a 40,000-word speech and have two sentences on India's relations with Pakistan, that would be the lead. And I think that is unfortunate for strategic reasons. The US is pursuing this relationship importantly, even predominantly, outside the context of problems today or tomorrow between India and Pakistan. I thought in writing this speech it was important to demonstrate that we are now far beyond rhetoric. The prime minister pointed the way with his "natural allies" concept. And we are now very far down the road.

Are we on the way to a formal tie-up?
(Laughs) Some in India have written about the possibility of a formal alliance between the US and India—you know whom am I referring to. This is not so. Instead, what we have in mind is interconnection of relations and national interests and values up and down our relationship through all the dimensions—diplomatic, political, defence, etc. So it's a very rich and increasingly tight connection across the board between the US and India but not in the context of a formal alliance. This isn't on the cards and neither country is seeking it.

Is there a participative role for India in this?
We are not there yet. We are starting. I can't tell now where this will eventually go with India. We have these discussions with a small number of countries. This is a pretty small club. We will see just where this goes. Of course, in terms of the hardware and software of our own missile defence plans we are still working on that extremely hard. So the Indians are in on the ground floor on this and our own thinking about this.

Does this principle of seeing where it goes apply to all aspects of the relations?
On really all the issues of our relations, we are breaking away from the patterns of the past. There are constraints which are legal in character or strategic in character but both the Indian and American governments are committed to being creative in pursuing these relationships in all the various dimensions, whether diplomatic or military or space or civil-nuclear.

Are personal relationships a factor in the recent transformation of Indo-US relations?
There have never been a set of personal relationships as there is now. Never.Try to go back and think of secretaries of state and ministers of foreign affairs here. Never. This is absolutely unique in this relationship. I do not want to say personal interactions dominate foreign policy but people now very naturally across the board pick up the phone and talk to one another.I pick up the phone and call Jaswant Singh or Brajesh Mishra or George Fernandes or Advani and they pick up the phone and call me. If I need to see them on the day they will see me on the day; we can handle it on the phone; sometimes it's on the weekend. I feel they trust my judgement enough that if I call them on the weekend they know that it's really something that I need to talk to them about. The same is true the other way.

Have you been in a similar situation before?
I spent most of my diplomatic career working on the great powers, including our closest allies in Europe and Asia. With a couple of exceptions, the constant interaction that is now happening in the US-India relationship doesn't happen with our treaty allies. There is an intensity of interaction in this relationship that I have seldom seen among our closest allies. This is week after week after week.