An undemocratic idea cannot make up for lack of ‘ideal’ regulation 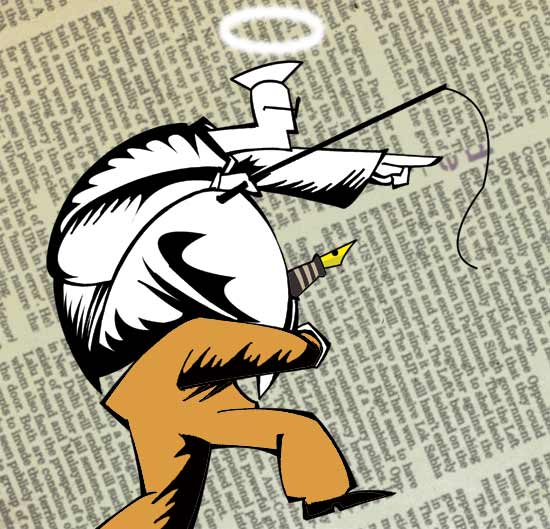 The most retrograde idea of recent times pertaining to free speech was Rajiv Gandhi’s Anti-Defamation Bill of 1988. It allowed the filing of defamation cases on easy grounds, provided for summary trials and stipulated minimum jail terms for editors. The intensity of the nationwide protests forced the government to drop the bill. The most retrograde idea since then has come from Manish Tewari, the mint-fresh Union MoS for information and broadcasting. He is drafting a bill to give the Press Council of India (PCI) punitive and regulatory powers.

Strangely, several of these ideas had figured in a private member’s bill proposed last year by the newbie MP Meenakshi Natarajan. Crowned as a discovery of Rahul Gandhi, she had had no connection whatsoever with the subject of her bill. Naturally,  questions arose about hidden hands at work. Inexplicably, the lady absented herself on the day the bill was to be introduced, taking it off the screen. Was Tewari hitting the ‘Refresh’ button on the ideas from his party’s inner-wheel club? Are hidden hands at work again? Ostensibly, the happiest person over Tewari’s bill must be PCI chairman Markandey Katju, who has been seeking more teeth for his organisation. But is the bill a ruse to make him do the government’s dirty work? Politicians don’t give anything for nothing.

Katju’s habit of expressing his views tactlessly detracted from the validity of his basic point, which was that media regulation was necessary and self-regulation was no regulation. Media excesses are a fact. The mad rush of news television has cost the media much of the public’s trust. Commercialisation at the corporate level has eroded  ethics at the journalistic level. In truth, it has become difficult to defend modern journalism in the name of freedom of speech. But defend it we must, because, in the midst of all the decay, it is still the only agency that keeps the people informed about the criminalities around them. Our corruption-ridden country must not throw out the bath water if that is the only way to keep the baby.

Katju is right when he asks for regulation of the media. But how? His panacea is that journalists be properly qualified, like doctors and lawyers are. He chose the wrong examples. Take a look at the saga of a twice-arrested former president of the Medical Council of India. For long years, every aspect of medical education in the country was for sale, with spurious doctors coming out of spurious medical colleges. As for the legal profession, the same bar council culture and qualification processes that produced Justice Katju, one of our most eminent judges, also produced disgraceful judges, two of whom recently resigned to escape impeachment over corruption.

Qualification is different from quality. The dilemma is acute in the media because business policies of a media company can adversely impact its journalism without journalistic involvement. How can the qualification  of journalists prevent a corporate decision to promote paid news? Katju is concerned about journalists being ignorant. Editors have been more concerned about this. But can you make a new journalist read books if he does not have that habit? If Katju has found a way, he will become a hero of history.

In journalism, perhaps more than in most other professions, ethics matters more than qualification. And no one, in India or elsewhere, has found a way to ensure that the qualified are ipso facto ethical. The ethical who are not qualified will be a better bet—and easier to find. Therefore, Justice Katju’s emphasis on qualification is both impractical and undesirable, as is Tewari’s proposal to use the lathi. No democracy has found an ideal solution to this. That does not make an undemocratic solution ideal.

Lashed by the “Murdoch Mafia’s” illegal phone-hacking shame, Britain’s political parties have just agreed to set up an independent regulatory agency that will have powers like imposing $1.5 million fines on editors. For the sins of a few, the media as a whole is subjected to draconian laws. The unfairness of it stood out in Britain for it was the free press, the Guardian and the Times, that exposed the News of the World’s criminalities. The politicians ignored this as they decided to end decades of media independence.

If that is how things go in the Mother of Parliaments, what can we expect in a parliament of dynasties? Perhaps Justice Katju will get his teeth and Tewari the sticks he wants. Perhaps media companies and high-flying journalists will get their fun, too, for all players know how to negotiate their ways to success in our accommodating democracy. All impossible things are possible in India.