Could the wily Raja of Raghogarh be staring at insignificance? 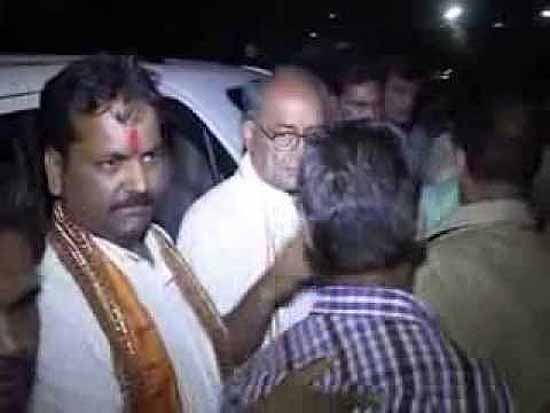 A large chunk of the hate mail flooding the Madhya Pradesh Congress inbox is addressed to former chief minister Digvijay Singh. On social networking sites, his first name invokes carnivorous puns from supporters of the BJP, hardly surprising, given the emerging culture of abuse. Surprising, though, is the reaction of some senior Congress members who once proudly displayed their photographs with him in their drawing rooms. “Shocking that the BJP should be calling him names when it owes him its 10 years in power,” says a sarcastic former follower.

Is the game up then for the ever-smiling, archetypal feudal lord of Raghogarh? Has he lost relevance in the Congress’s current scheme of things? Though party vice-president Rahul Gandhi’s “no one cares for the setting sun” rem­ark was aimed at promoting young Jyotiraditya Scindia, Digvijay himself added to the speculation saying he was the setting sun and Rahul the rising one. Both Rahul and Jyotiraditya now ensure Digvijay is not slighted on public platforms.

There’s a striking similarity in the way Digvijay Singh and his mentor Arjun Singh played their politics and paid for needless intrigue. Arjun Singh had to step down as chief minister in January 1989 after the Jabalpur High Court verdict on the Churhat lottery case. He tried to defy the party which wanted Madhavrao Scindia to replace him. The central leadership shot down his proposal to get Digvijay Singh to succeed him and recalled predecessor Motilal Vora. Arjun Singh found himself absolutely helpless in the face of betrayal by former friends like Makhanlal Fotedar, Buta Singh, Darbara Singh and Ghulam Nabi Azad whom he had rubbed the wrong way during his tenure as party vice-president.

Similarly, Digvijay Singh outmanoeuvred party veteran Shyamacharan Shukla (who had inducted him in the party) in 1993 to win his first term as chief minister. The party at that time was in turmoil, with several factions at war. Digvijay managed the contradictions within the party with his happy-go-lucky disposition and earned the trust of Sonia Gandhi, who overruled strong opposition to offer him a second term. Digvijay’s turned out to be arguably the most corrupt dispensation. Like Laloo Prasad Yadav, he claimed that elections are won by management and not by development. He ended up wrecking land reforms and democratic institutions like panchayati raj.

During the 1996 Lok Sabha elections held in the wake of P.V. Narasimha Rao’s infamous hawala clean-up of adversaries, leaders like Madhavrao and Arjun Singh were cast aside. Digvijay’s ministry included supporters of both stalwarts, whom he dumped without any qualms. This won him favours with the high command but he was left red-faced when Sitaram Kesri, after replacing Narasimha Rao as party president, got both the leaders back into the party fold. He managed to neutralise their anger by getting Vidya Charan Shukla to counter them.

Digvijay’s close friends started deserting him during his tough test for the third election. He should have known it but his media managers in Delhi created the illusion of an imminent victory. Digvijay realised a little too late in the day that the voter can’t be fooled for long. He has his own mind and can use it to a telling effect.

The BJP, which stormed to power in the state in 2003, earned its second term just by shovelling muck at Digvijay—with hardly a whimper of protest from the Congress which had little to offer in Digvijay’s defence. He paid the price for being self-centred. The rivalry within the party has spilled over to the next generation, with Arjun Singh’s son Ajay Singh and Digvijay staying close together against Madhav­rao’s son Jyotiraditya. Mutual distrust persists, with pcc chief Kantilal Bhuria playing the cat’s paw for the Thakur duo. The trio is now referred to as D company.

His party colleagues believe Rahul considers him his mentor, which earns him certain privileges. He got his son to file his nomination from Raghogarh even before the party cle­a­red his name. Any other leader doing that would have inc­ur­red disciplinary action. Digvijay’s indifferent performance as the general secretary in charge of Uttar Pradesh and subse­q­uent unimpressive role in Andhra Pradesh through the crisis are no cause for cheer. The party won’t write him off yet, but it can’t rely on him for a statesman-like role. Hard to say if he can contribute much to Congress progress but, if offended, he can harm the party more than its enemies.