No Country For Makers 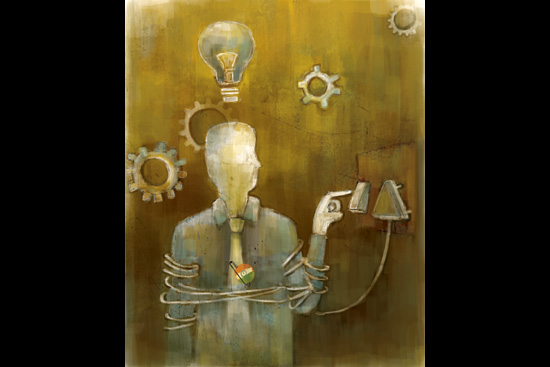 I am writing this on a Japanese Lenovo. The flatscreen is Taiwanese AOC. The phone on my desk is a German Siemens. I am staring at a hundred Post-its on the softboard with things-to-do on them, jotted with a French Bic pen. The office space itself, of cubicles and cabins, blinds and false ceiling with hidden AC ducts, a water cooler and a coffee dispenser, is all foreign. I’m wearing Levi’s jeans and Nike shoes. My shirt says it’s ‘Made In India’ but it has gone all the way to Marks and Spencer and come back here. If I really take this further, my undergarments are by Jockey. I have tried our own Dixcy and Macho Man and Rupa, but they wear thin too soon. Excuse me, it’s my mobile buzzing, a Canadian Blackberry, very Jurassic, but I’ve stuck to it, running on British Vodafone. It was my sister-in-law. They are shifting home. She wanted to know if Ikea was coming to India: she wants to put off buying furniture till then.

Is there a single product, a service, an idea originating in India that somebody in Cincinnati, Montevideo or Guangzhou is using right now? A single one? Alright, they may be doing yoga in Santiago, or cooking basmati in Ottawa, with a turm­eric-cumin tadka, to go with chicken tikka masala. Dhrupad may be playing in Dusseldorf; someone in Lyon may be a wearing a diamond cut in Surat. Let me reframe the question: is there a single product, service or idea originating in India post-Ancient History, or shall we say, post Vedic-era?

After zero, all those years ago, which many suspect is more folklore than fact, what else have we given the world, apart from say carpets and cardamom? No, we are not a tech superpower—our software exports is about the same as what we make from gems and jewellery plus handicrafts. The quality of our software is questionable too. No new operating systems or search engines. What we do is more supermarket billing.

Yes, our Darjeeling tea, black pepper and Lal Qila rice are world-famous, but none of us had any hand in developing them: it’s merely nature’s gift of the right slope of hill and slant of sunbeam. We were big on spirituality but we have taken a beating there, too, in the 1960s, as the world learnt that however intensely you meditate, it’s not possible to levitate sitting in the lotus position. Our top 25 companies really don’t make anything like the iPhone, which the whole world queues up to buy, or the Airbus. Nor do they provide any service the whole world queues up to seek and pay for.

The top oil companies simply import petrol and diesel and sell it to us, and if they lose money, the government takes the hit. Most others in the 25 make their millions by cornering natural resources like iron and aluminium ore, coal, wavelength, rubber, cement, often through devious means, and sell them to us. In most cases, the extracting of natural resources is still primitive and outdated and highly polluting.

Yes, I can hear the cry about historical imbalances. While half the world was in the nuts and bolts of industrial revolution, we were still a slave country, oppressed under foreign rule. Sure, that’s a good point, and it is enough to justify why we didn’t do so many things. Like we didn’t invent electricity, or the steam engine or the airplane or motor car or telephone or the printing press or the typewriter or sewing machine or elevators or TV sets or vacuum cleaners or aerosol cans or penicillin or open heart surgery or Viagra. We didn’t discover the dna’s helical structure, or think up missiles, airbags, sliced bread or pizza delivery. There are about a million such things that we use daily which didn’t occur to us first. That’s fine, but that’s a long time ago. What happened in the last 65 years after we became free? Why has not a single bright student from our famed IITs, AIIMS and IIMs come up with a single world-beating idea? (A word about them here: our IITs rank below 225 in world technical institutes, our IIMs below 250 in global management schools. So, those one per cent stud­ents who crack CAT and feel on top of the world are actually behind at least 200 better institutes in the world.) 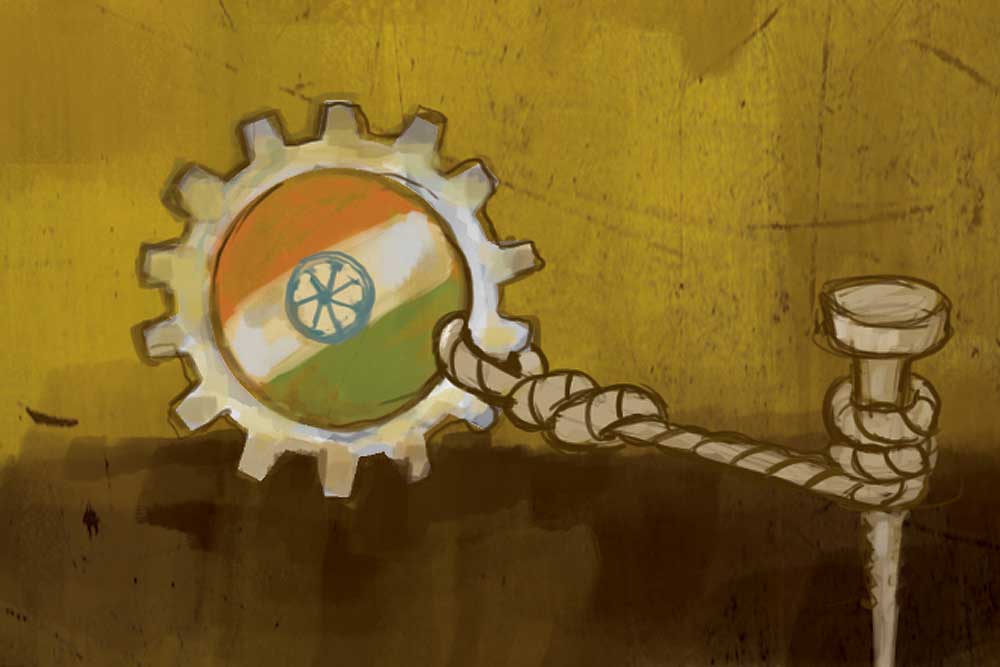 The darling of the stockmarket is a rip-off of Amazon. Even our chilli sauce is a glutinous and unrefined imitation of Tabasco.

Why couldn’t one of them in 2004, not the last century, think up an idea that people like to share and socialise with on the internet, like some kids in Harvard University did? If Facebook, iPhone and Instagram can only occur to someone from the First World, how about earthier things? Say Sello­tape or chewing gum or bubble wrap? The only original home appliance we truly designed ourselves (churned out by tho­usands by those factories in Coimbatore) are those electrified stone-grinders used for making dosa or idli batter. But it’s not only about products, if that sounds like too trivial a pursuit. The hundreds of services we use routinely and without much thought—like credit cards, the internet, radio taxis, insurance policies, customer service, medical proc­edures, defence weaponry, forensic inv­estigation, stockmarkets, traffic lights, dish TV, FM radio, couriers, frequent flyer miles, assembly line productions or EMIs—are all imported. Of course, you can argue, look where it has got the world, all these products and services. True, but we don’t reject them as soul-suckers, we happily lap it all up.

We pride ourselves on our jugaad, that uniquely Indian ability to ‘fix-it’—anything, using washing machines to make lassi, or turning water pump motors into public transport! But what a colossally short-sighted and loser idea it is to somehow make something work till it does. There is a raging controversy in Delhi about what are called e-rickshaws. You don’t have to register  them, don’t need any design approval, don’t need a licence to drive them. They don’t have fare meters. It may seem like an eco-friendly option, but the batteries they run on are cheap imports. When they go kaput, they are dumped in the nearest garbage pit, leaching chemicals through the landfill. Even the juice is stolen: many operators charge their batteries simply by drawing it on the sly from a convenient streetlight socket. There is no big factory making them with any quality control or labour laws—they are just put together by welders in dingy sweatshops. This is the new mass transport option for the big capital of a superpower—this, when Google is testing driverless cars and Apple is unveiling the prototype of iMobile.

In fact, we have this fly-by-night attitude to most business ventures, a sort of let’s run it till we get caught, whether it is gas exploration or non-banking finance companies, housing projects, port-building or local mobile phones—sometimes even software firms (think Satyam). The minute someone announ­ces a world-beating idea like a sub-Rs 10,000 laptop, your first instinct is to raise your eyebrows rather than applaud it. Sadly, the suspicions always come true.

Last year, a digitally remastered version of Sai Paranjpye’s classic 1981 comedy Chasme Baddoor was released. It is startling to see Deepti Naval, the heroine, hailing autos on Delhi roads that look exactly the same as they do today. The great leap in autorickshaw technology in the last 30 years has been that the engine has gone from the front to the rear. Why? How come, on the other hand, scooters and motorcycles have advanced and become cutting-edge? Beca­use no other respectable country in the world will allow our kind of autos to run on its streets. Since nobody makes them, there is no competition, why upgrade? But scooters and motorcycles are a tough business. So we need tie-ups with foreign majors from Italy and Japan for transfer of technology in order to stay in the race.

We don’t invent or discover or create, we only ape. The current darling of the stockmarket, the $6 bn Flipkart, is a total clone of Amazon, starting off with books and going on to other products. Why do our Woodland shoes look uncannily like Timberland, right up to the logo? Why is even our chilli sauce, Capsico, a glutinous and unrefined imitation of Tabasco? Since we don’t invent or innovate, we have to wait for someone else to develop a cure for Alzheimer’s or cervical cancer or the common cold. The last big idea in agriculture was the Green Revolution, 47 years ago. The last big idea in dairy was Operation Flood, 39 years ago. The last big idea in health was yoga, about 3,000 years ago. (In fact, yoga came back to us from the West. It was dead in our own country. We taught our kids some World War II drill in the hot sun in schools in PT classes).

The danger lies here, in our inability to find solutions to problems unique to us, which nobody else is going to develop for us to blindly copy. No other country is going to tell us how to manage our population, how to help the poor out of poverty, how to give them health facilities, schools, how to bring equality to women, how to dismantle caste, how to bring new ideas in agriculture, how to bring order to our chaotic cities, how to solve our transport problem. Here, it needs our own creativity and genius, and that’s the reason we have failed in all these areas so miserably for so long. ‘Make in India’ may have a nice ring to it, but it is not true. We can’t make anything, except perhaps the best Rooh Afza in the world.

A Broken Spring In A Factory Yard