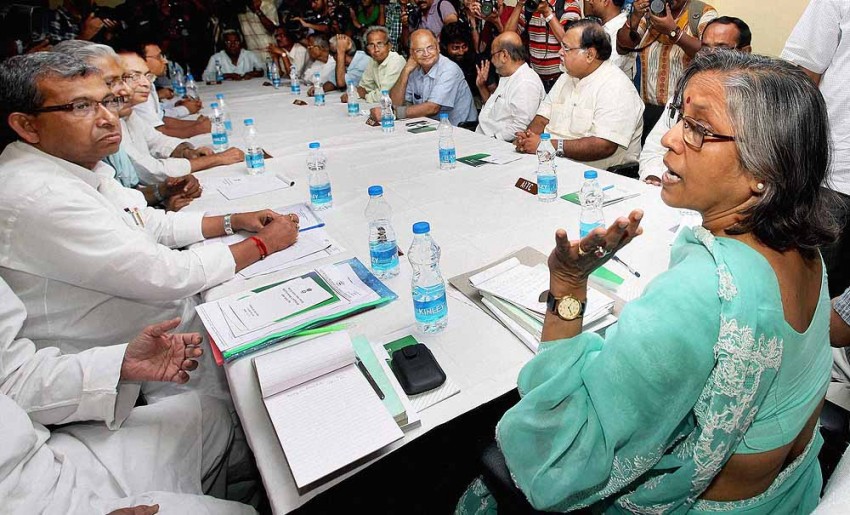 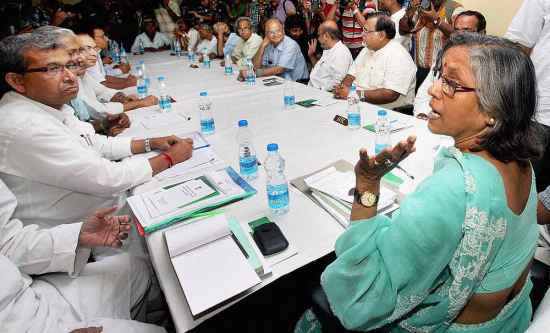 After months of anticipation and rumours, preparatory political exertions, and a running battle with the state election commission (SEC), the countdown to the panchayat polls in West Bengal has begun. The Calcutta High Court on May 14 ordered panchayat polls to be held in three phases (July 2, 6 and 9) across 17 distr­icts. Now, as filing of nomination pap­ers gathers pace, so does political vio­lence, with the TMC, Congress and CPI(M) trading charges of intimidation and assault. But Bengal’s 2013 pan­cha­yat polls has an interesting back-story.

As the first major elections the Trin­amool Congress will face after it came to power with promises of ‘poriborton’, it’s with good reason being touted as  an acid test for Mamata Banerjee. It is also the first panchayat polls in Bengal to have courted so much controversy, say political analysts. “I have seen several panchayat polls but have never seen such a constitutional crisis emerge as has this time around,” observes political commentator Tarun Ganguly.

It all started in March this year, with state election commissioner Mira Pande writing to the state government, reminding it of the necessity of holding the rural elections at the earliest so as not to precipitate a constitutional crisis—the terms of the current panchayat bodies end in July—and requesting it to formally set the ball rolling as far as logistics was concerned. Not only did the  government not reply, it ignored several subsequent reminders.

The state government’s desperate ignoring of SEC letters and kneejerk reaction was seen as a ploy to delay polls.

When the state government did finally move on the polls, it completely ignored the SEC and unilaterally ann­ounced two polling dates—April 26 and April 30. (The rural poll law clearly states the government and the SEC must concur on dates and other poll logistics.) Anyway, Malda, Mur­sh­id­a­bad and Dakshin Dinajpur districts (all Con­gress strongholds) were to vote in the second phase, while the remaining 14 districts were slotted to go to the hustings in the first phase. Crucially, it also ruled out reinforcements from central paramilitary forces for man­ning polling booths, saying empty state coffers meant it couldn’t afford to pay for the forces.

The whole tone and tenor  of the move was naturally read as petulance—indeed, as an attempt to delay polls, without making that part overt. Opposition parties were quick to cry foul about the dilatory tactics. “These are all ploys to ensure that elections are not held without letting Trinamool’s reluctance show,” CPI(M) leader Moh­ammed Salim told Outlook.

Adhir Chowdhury, Congress leader from Murshidabad and Union minister of state for railways, also pointed out that the TMC’s procrastination over the panchayat polls was clear from the “unconstitutional manner” in which it was going about it. “The law pertaining to panchayat polls demands that the state government and the state poll panel work together and come to a consensus. The state government is just buying time,” he had told Outlook. 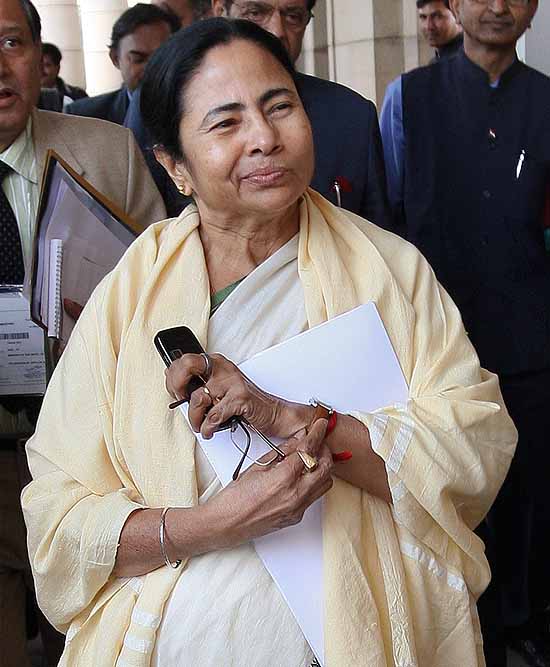 But why would Mamata Banerjee, the one who upheld ‘ma, mati, manush’, be shy of holding rural polls at this time? The first and most obvious reason, of course, is the chit fund scam that  broke like a hurricane in early summer. It effectively, some say irreparably, tarnished the image of the ruling party. All Sar­adha group ringleaders had direct and close Trinamool links. Saradha Media CEO Kunal Ghosh was a TMC Rajya Sabha MP, for instance. Saradha boss Sudipta Sen was alleged to have had connections with TMC bigwigs. More tellingly, many pro-Trinamool media houses, including television channels and print pub­li­ca­tions—like Channel 10, Bengal Post, Sakalbela, etc—were owned by chit funds. “These chit funds, which I have always ref­erred to as ‘cheat funds’, had been cheating the poor for years,” says Adhir Chowdhury. “In rural areas, small savers have invested their life’s earnings in these chit funds, which clearly have the backing of the ruling party. The scam has broken right before the panchayat polls. Do you think voters will forgive Trinamool? They will not. This is the bitter truth and so the ruling party is afraid to face the electorate.”

According to political analysts, the signals the TMC has got from the gro­und are that holding elections at this time could be catastrophic for them. “They are dragging their feet and hoping for better times,” explains Tarun Ganguly. “Just the chit fund scandal is enough to antagonise rural voters. But when you add to that a series of other failures, it spells disaster.”

This oft-mentioned list includes, yes, the arbitrary arrest of a poor farmer, Shiladitya Chowdhury, who was pro­mptly branded ‘Maoist’ for interrupting a speech by Mamata Banerjee at a 2012 rally at Belpahari in remote Jangalmahal. A Belpahari farmer, who had voted for Didi in the assembly elections, had told Outlook soon after: “We put her in power. If she treats us badly, we will put her back down.”

There are other factors that might have troubled TMC leaders and contributed to their recent apathy towards elections. It must be remembered that not a year has passed since Trinamool’s break-up with the Congress at both the Centre and the state and they may find it difficult to go it alone at the polls. In the assembly elections of 2011, the alliance with the Congress played an integral role in Mamata’s victory, uniting the anti-Left vote. “They no longer have the support of the Congress to fight the elections. They are afraid of that too,” Adhir Chowdhury reiterated.

To make matters worse for the ruling party, many chit fund-sponsored and pro-TMC electronic and print publications have been dissolved in the rather untimely media meltdown following the scandal. The TMC had relied heavily on many of these channels and publications to reach rural voters during the 2011 assembly polls.

Trinamool’s extreme aversion to the polls throughout March-May took curious turns. TMC general secretary Mukul Roy had issued a threat to the SEC, saying that if any deaths took place due to their insistence on holding elections in the heat of the summer months, he would ensure that a rally carrying the corpse(s) would protest before the SEC office.

The TMC, however, always categorically denied charges that it was trying to avoid holding elections. Dismissing such claims, Roy said the fact that they had unilaterally announced panchayat poll dates showed their intention to hold the elections at the earliest. “We do not want a constitutional crisis. Nor are we afraid to face the rural electorate as our work will speak for itself. We are merely concerned about the discomfort and health risks of the rural voter who often has to walk for miles to cast his vote. Even polling agents have to sit in the sweltering heat, which in some districts can be quite harsh,” he said. The state government’s intentions had been misconstrued, he claimed, and accused SEC Mira Pande of being partial to the CPI(M). “She had been appointed during the Left regime and clearly is working in collusion with them,” he had said.

An impatient SEC, however, fearing a constitutional crisis over the issues the TMC had left pending, moved court in May. The areas of contentions were the dates, the phasing and the whole deb­ate about whether or not to use central paramilitary forces. The SEC wanted three phases, the state government wanted two; the SEC wanted central paramilitary, the state government insisted on state police or reinforcements from other states. The legal wrangle continued for weeks.

The battle between the SEC and the state government still seems far from over, as it is being fought out in the Calcutta High Court. While the HC has pronounced dates for the three-phase polls and said that results would have to be declared by July 15, the dispute over security arrangements persists.

The state government had to dim its opposition to paramilitary forces after the Chhattisgarh massacre, and in the latest court hearing they have backtracked on their demand. But, in an ironic twist, the Centre has pleaded unavailability of forces for poll duty.

Indeed, the poll panel and the state government are jousting still as we go to press. In the latest court hearing, the advocate-general, representing the government, taunted the SEC by likening its demands to those of a “whimsical beautiful lady”, drawing charges of sexism and inappropriate behaviour.

That more or less crowns what has been a most unusually acrimonious  run-up to a panchayat poll, one riddled with many verbal duels. Now, with a month to go, it remains to be seen how Mamata will fare compared to the 2008 polls, when she spectacularly rang the death knell of the Left.