“No Clue Where Donations In The Past Year Came From”

The man behind Jan Lokpal on his ideological convictions, faith in “the people”, dealings with the Aruna Roy-led NCPRI and funding for his ventures 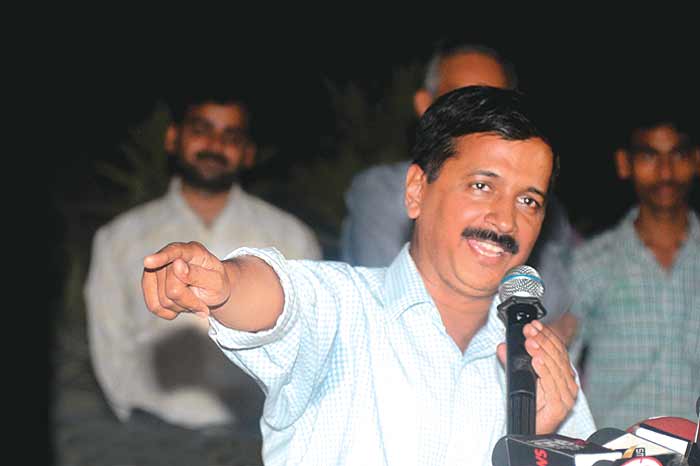 Jitender Gupta
Saba Naqvi September 19, 2011 00:00 IST “No Clue Where Donations In The Past Year Came From”

Arvind Kejriwal is part of the brains trust behind the Anna Hazare movement, which has the potential to further undermine the Delhi order. The engineer-turned-civil servant-turned-RTI activist is now a mass campaigner for the Jan Lokpal bill and plans to expand the movement. He spoke to Saba Naqvi about his ideological convictions, faith in “the people”, dealings with the Aruna Roy-led National Campaign for People’s Right to Information (NCPRI) and gave details of the funding for his ventures. Excerpts:


Do you see this movement developing into a political force?

But is it right for you to say we’re “the people”. Shouldn’t you then offer a political alternative and join politics?

We are not going to contest elections, but will keep trying to change the system.

Do you have ideological inclinations?

Some people have seen your movement as an RSS plot.

I’m aware of that. Someone from Aruna Roy’s organisation has written an article that my father is an RSS office-bearer and close to Advaniji. What nonsense is this! You are getting so dirty. Just muck. The VHP and RSS have also been making claims about feeding thousands of people and mobilising their cadre. But please be clear. We have no space for any communal force although some may be trying to take advantage of the movement and that does concern us.

Many OBC and Dalit politicians see your movement as an upper-caste conspiracy to take back power from the lower castes.

I think it is good if the established power centres feel their power is being diminished and going to the people. Mayawati just said that Assange is anti-Dalit because she did not like the Wikileaks report about her getting sandals on a special jet. So, if you do not have answers or if someone is trying to demolish your power centre, you just call it anti-Dalit.

Are you anti-reservation? Was that the reason for your involvement with the anti-quota Youth for Equality?

No, I am not anti-reservation. That is wrong information. I have never participated in the anti-reservation movement. I know some of the students from Youth for Equality, but knowing them does not mean I support them.

“My NGO received Rs 25 lakh each, from Narayana Murthy and the Ratan Tata Trust for RTI campaigns. That’s as far as our direct links with corporates go.”

Many people believe your Jan Lokpal only creates a huge behemoth and that the bill proposed by NCPRI and Aruna Roy is better. Are you open to her suggestions?

We have changed our bill many times on the basis of public feedback. We put it on the website and got 3,000 responses. We have tried our best to engage with Arunaji. We failed. Whenever she called us for a meeting, we have gone. On April 3 and 4, I, Prashant and Shanti Bhushan, and Justice Hegde had meetings with them, after which they issued a press release saying the Jan Lokpal was an excellent bill. On April 5, Anna went on a fast; on April 10, they said the Jan Lokpal is a Frankenstein’s monster.

Aruna Roy also came to the Ramlila ground to ask about Anna’s health. But there has been no further consultation. An attempt was made by Kuldeep Nayar (to bring us together), Prashant and I went. When Arunaji came to know that I’d also be coming to this meeting, she said I shouldn’t be allowed to come. But forget all that. We are not trying to declare some kind of victory over their proposals. We will still incorporate all the good suggestions before our final presentation to the standing committee in the last week of September. There is no theirs vs ours. It can be a mixture also.

So, have a lot of the problems been created by the egos of activists?

Your first NGO Parivartan is based on the donation model. Then suddenly another NGO, Kabir, starts to take huge grants from Ford Foundation.

Kabir is run by Manish Sisodia. We work very closely together, but these are separate NGOs. Let Manish answer.

(Manish Sisodia: I was working in Zee News earlier. After I left Zee, I took the funds to make films, documentaries and run campaigns on RTI. We took money in 2005 and 2007. It ended in 2009-10. We do not intend to take any more, although funds have been allocated).

‘Our core is comprised of 25 people, most of whom fall left of centre. We’ve no space for any communal force although some are trying to take advantage of our fight.’

Do you think there should be greater clarity on the kind of grants you should take? And does not support from business houses make you hostage to outside interests?

I’m so glad you are asking this. The Public Cause Research Foundation was set up by me in 2006 with the Magsaysay award money. We funded RTI campaigns and what we call the ‘swaraj campaign’ for political decentralistion and to research governance issues. We instituted RTI awards and, for two years, we took funds from Narayana Murthy (of Infosys) and the Ratan Tata Trust, Rs 25 lakh from each. That was as far as any direct links to corporates go. In the past year, there have been only donations and no project-based funding. We’ve no clue where the donations come from.

How much money has been received?

In April, Rs 32 lakh. Do check the details on India Against Corruption’s website.

Do you have positions on people’s movements like POSCO, Jaitapur and other land struggles?

Certainly. We feel no land should be acquired without the sanction of the gram sabha. The government should not just do consultations, but take consent in each case like POSCO. There is a danger when the government says it will take consent from 80 per cent of the landowners as most people depend on the land without owning it. The central decision should be with the gram sabha.

Why was Anna taken to a five-star resort hospital like Medanta?

Madhu Trehan is a good friend. When Anna was unwell some months ago, she’d suggested Dr Trehan. Since then, he has been to that hospital two, three times. When he went to that hospital now, there was a hue and cry. To an extent, I understand. Anna, being from a particular background, going to such a hospital; the two things don’t really gel. I think we won’t do that in the future.

Some of the ideas thrown up by you like the right to recall, legislation through gram panchayats, seem to be out of cuckooland or rather archaic.

I do not think the right to recall is such an archaic idea. It exists at the panchayat and municipality levels in many states. It just needs to be taken higher to the state and central levels. And the gram sabha is a very modern concept. Have you heard of town hall meetings in the US? The townspeople take decisions on how their town should be run.

But in such a large country, who will decide who are “the people”?

We elect someone once in five years. That person not only does not come back to you and ask you what you want, but at the same time, he himself does not have an independent voice in Parliament and he goes by the whip of the high command. So, we hand over power to a few people called the party high command and they run the country. We want to question this form of democracy. It is not even representative in character.