No Aliens Under Our Beds 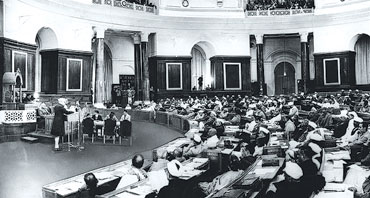 My favourite example of parliamentary humour, however, was a placard that sometime in the early 1970s was hung over the capacious form of the architect-turned-politician Piloo Mody. It bore the words: 'I AM A CIA AGENT'.

Mody represented the Swatantra Party in the Lok Sabha. Founded in 1959 by C. Rajagopalachari, the party promoted liberal ideals and a free-market economy. The prime minister of the time, Jawaharlal Nehru, saw Rajaji's Swatantra Party as a reactionary right-wing formation opposed to his own progressive socialism. As he once joked about his old comrade-turned-adversary: "He likes the Old Testament. I like the New Testament." Through the 1960s, however, the Swatantra Party grew in influence. It was the second largest party in the fourth Lok Sabha, where its sharp-tongued leader, Minoo Masani, harassed and harried the prime minister—who now was not Nehru but his daughter Indira Gandhi.