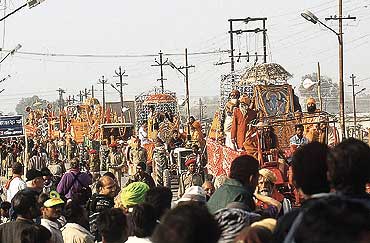 The Penguin Book Of Indian Journeys
By Dom Moraes
Viking Penguin India Rs:395; Pages:384
Whether it be the frigid wastes of Antarctica or the come-hither beckoning of the next-door-neighbour's wife, the lure of foreign parts arouses in the traveller a sense of wonder just as surely as it creates trepidation in the stationary citizen. The travel experience has been described as "wealth no government can take away" and a good anthology of travellers' findings from India should add to the reader's understanding of the subcontinent's "colossal diversities," as Dom Moraes puts it.

Penguin has cast its net wide to reveal India "like this only" in a kaleidoscopic coverage of scenic and sore spots, some of which promise to be collide-oscopic with disastrous effect on our enormous tourist potential. Some 35 essays roam at random (missing out on cricket and Kashmir) penned by some of the biggest names in the business. But it is not the Naipauls, the Rushdies, the Dalrymples or the Therouxes that stand out since most of their stuff is old hat. It is the quality of Indian writing that shines through and M.J. Akbar, P. Sainath, Vijay Nambisan and Jerry Pinto easily hold their own with the videshi ustads. Even more to my liking is the poise and verve of the homegrown lady contributors who steal the thunder when it comes to readability.

Namita Gokhale is passionate about Nainital despite its asphyxiating centrepiece while Anita Nair introduces us to the lost world of the Wyanad hills; Royina Grewal lingers along Narmada's unspoilt upper reaches, while Sarayu Ahuja flies Jet Airways with an idli Amma indignant at the comeuppance of the twiceborn in Periyar's province. Seeme Qasim visits pre-quake Bhuj only to have the local police barge into her room on the strength of her name. Anees Jung explores the fading glories of the Deccan sultanate and discovers that "women continue to hide themselves as if they were diamonds". Is there anything tougher than being a modern Muslim woman traveller?

From Andrew Harvey's laidback and lyrical sojourn in Leh and Jan Morris' cheerful encounter with Darjeeling, the reader travels south to the threshold of Veerappan's jungle hideout with Abraham Verghese and west to Malnad with a disappointingly uncritical assessment of Sringeri's claims to ancientry from R.K. Narayan. Some of the essays come perilously close to Ripley's 'believe it or not'. Did you know that Delhi's beggars move to the hill stations in summer to maintain a meaningful relationship with their clients? Or that in north Kerala your lady bus conductor will clean up passengers' vomit? What about Bihar where for Rs 5 you can dance with a bear or, for a few more, purchase a "singleshot pistol" and play Magadh Roulette. ("Bihar certainly broadens the mind!")

If this collection sounds excessively Anglocentric (surely Nirmal Verma in translation would have been better than Allen Ginsberg's impressionistic uninvolvement with the Banaras ghats) at least Angrezi has the detachment for fresh perspective from outsiders who are not conditioned to the brutalities that is the lot of the downtrodden. Exploitation of tribals and widows by pious commission agents are commonplace and Akbar recounts how even a tribal decorated by the President of India for bravery is not immune to being bayoneted to death by the Bihar police. Everybody Loves a Good Sainath, and Palagummi does not disappoint. In the "Cut-Off Area" of Orissa he discovers tribals so poor that the moneylenders are not interested in them.

Move to Madras and Vidyakar, a voluntary social worker who cares for abandoned streetchildren, stands in despair before a hoarding that reads 'Be a Proud Indian'. Pride runs high in Ayodhya and so does fear, as Joana Blank discovers while seeking to trace the various versions of the Ramayana. If Naipaul's Mrs Mahendra, wife of a Delhi contractor with a craze for phoren, crumples before the challenges of modernity, it is not surprising that Blank's Mrs Sahiya, a violent minority-baiter baying for blood, should have no stomach for facing the demands of modern life. Retreat into the past is the only option. Possibly she could empathise with Phoolan Devi who chanted 'Jai Durga Mata' as she had 20 villagers gunned down to settle scores and further the politics of revenge.

However, it is to Vikram Seth we must turn to escape the frustration of the inadequate and the "dream addict", as Amit Chaudury calls him. On his return overland from China through Nepal, Seth confirms Moraes' argument that India is singularly herself and there is no such thing as the national ethos or mode of thinking.

Seth spells out the only improving reflection I find in the book (in my generation it is de rigueur to witter on philosophically but perhaps today's traveller believes the world is too far gone for improvement). He writes: "To learn about another great culture is to enrich oneself, to understand one's country better, to feel more at home in the world and to add to the reservoir of individual goodwill." Amen to that.

The ultimate test for a travel writer is whether he can, like Captain Cook in 1776, arouse the Bosswell in us. "I catch the curiosity," Bosswell said, "and adventure, and felt a strong inclination to go with him on his next voyage." Indian Journeys passes this test. The reader is armed with information and itineraries enabling him to sally forth and hopefully pen thoughts that find a way into a companion volume, reiterating India's position as the world's most rewarding destination.