The animus sown during the assembly poll still poisons the air in Bihar. Is Chirag Paswan a part of the ruling coalition or not? Who knows? Meanwhile, there’s talk of poaching…. 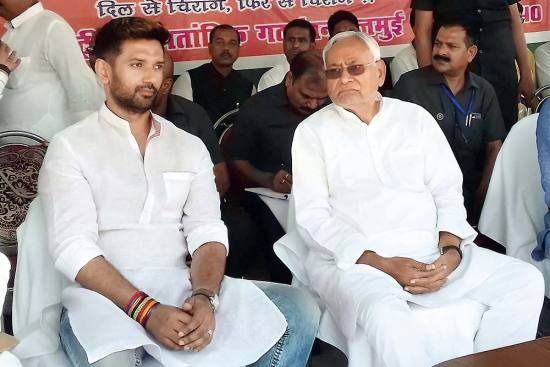 What does the big brother do when two younger siblings fight? The BJP in Bihar, finding itself in such an unenviable situation, is just sitting back and hoping to ride out the political storm. But the problem is, this long-drawn battle between chief minister Nitish Kumar’s JD(U) and Chirag Paswan’s LJP is only getting uglier.

The latest friction bet­ween the two is over the construction of a medical college in Jamui, the constituency which has elected Chirag twice to the Lok Sabha. Chirag is accusing the chief minister of creating hurdles in the construction of the proposed Jamui Medical College and Hospital with the Bihar Medical Services and Infrastructure Corporation Ltd “inexplicably” cancelling its tenders “on two occasions”. The LJP president claims that construction of other medical colleges sanctioned at the same time has alr­eady started. “I fail to und­erstand why the tenders for Jamui are being cancelled frequently despite completion of the entire process,” he said in a letter to the CM. The government is yet to respond to the allegations.

Nitish is yet to reconcile to the LJP’s decision to contest the last assembly polls on its own, which is believed to have led to the defeat of 25 to 30 of JD(U) candidates. The party, running the coalition government along with BJP in the state, says that the LJP ceased to be part of NDA the day it fielded its candidates against the coalition.

But much to the chagrin of the JD(U)there is no word yet from the BJP that Chirag has indeed become a persona non grata for their alliance. During the assembly polls, Chirag was suspected of having reached a tacit understanding with the BJP to weaken Nitish, a charge vehemently denied by the saffron outfit. For his part, Nitish says it is for the BJP to decide as to what role the LJP will have...