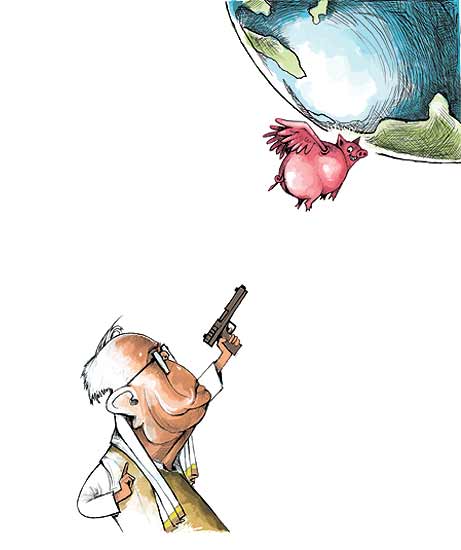 The Indian taxman is acquiring global heft. If two recent high-profile cases are an indication, any global M&A that involves Indian assets—irrespective of where it happens, or how it’s structured—is due for a long, hard scrutiny from Indian tax authorities. That’s significant, not just because it shows a flinty, don’t-take-me-for-granted kind of aggression on the global mega deal stage. By changing the rules of the game, it’s also got many companies that have recently etched M&A deals rather upset—and an army of corporate lawyers worried.

“If you sell anything in India, you have to pay capital gains tax. In the Cadbury-Kraft deal, tax liability will be huge.”
Gaurang Kanth, Corporate lawyer

The first case—a whopping $2.5-billion tax liability stemming from Vodafone’s $11-billion purchase of Hutch’s India operations—is well-known. It’s in the Supreme Court after the government won the case in the Bombay High Court last year. The second instance happened recently. In December 2010, global confectionery major Kraft took over Cadbury in a $19.6-billion deal. Result: Cadbury’s India business too came within Kraft’s fold. While this is a global acquisition with India being one of the countries where Cadbury operated, the government is “examining” the tax implications in India. Soon after the takeover, Delhi-based lawyer Gaurang Kanth filed a public interest litigation (PIL) in the Delhi High Court for social activist Ved Prakash, stating that Cadbury had evaded substantial taxes in India, as the global deal also included Indian assets. Says Kanth: “If you are selling anything in India, you have to pay capital gains tax. In the Cadbury-Kraft deal, the India portion is significant, so the tax liability would be huge.” It’s common knowledge that one of Kraft’s reasons for acquiring Cadbury was the latter’s strong growth in emerging markets, including India (where Cadbury is the market leader, by far).

The Indian tax authorities have taken the stand that when the shares of a foreign company (deriving value from business in India) are transferred along with the rights and obligations of the Indian businesses, there would be a tax liability in India. This has huge implications for cross-border deals involving India; it also opens up a Pandora’s box of earlier cases. Already, the finance minister has told Parliament in November that it was looking into four deals for a similar reason. It is also learnt that the government has issued notices in several other cases of mergers over the past few years. “Having tasted blood in the Vodafone case, all kinds of M&A deals would now be looked at,” says N.C. Hegde, partner, Deloitte Haskins & Sells.

“On what basis would they tax a global deal, a small portion of which is in India? There is no Indian law for this.”
Dinesh Kanabar, Chairman, tax, KPMG

Pranay Bhatia, associate partner at law firm Economic Laws Practice, adds: “If this (the Bombay High Court verdict in the Vodafone case) is followed in the Cadbury case, the I-T department can ask the company to apportion the Indian share of the value, compute capital gains and pay tax thereon.” He says that the department has issued notices in about 148 cases where similar transactions have taken place. These cases are being examined and scrutinised in greater detail by the ministry.

This has led to a fierce debate in the corporate-legal community and among tax experts on whether the Indian government can impose a tax on global mergers and acquisitions where India is a part. The debate has erupted also because there is ambiguity about the exact legal and policy position on tax liability in such cases. Says tax expert H.P. Ranina: “If a foreign company’s shares are purchased outside India, there is no transfer of an Indian company’s shares.” But there is also a growing contrarian view. Corporate lawyer Hemant Batra says, “It’s a fact that the ownership of the Indian company has changed. There may not be a physical transfer of shares but there would be a deemed transfer of shares.”

As expected, experts at audit and law firms representing MNC firms question the government’s logic on this. Referring to the Cadbury case, Dinesh Kanabar, deputy CEO and chairman, tax, KPMG, says: “On what basis would they tax a global transaction, a small portion of which is in India? There is no law in India for this and the forthcoming law—the Direct Tax Code or DTC—in fact even says that it can be taxed only when over 51 per cent of its value resides in India.”

One of the problems that some of these cases may bump into is the routing of investments or acquisitions through the Mauritius- or Cayman Islands-based companies—the latter features in the Vodafone case. Because of India’s tax avoidance treaty with Mauritius, many firms may have escaped tax that could have arisen out of these deals. However, the dtc, which comes into force in April next year, has stated that if such companies were found to have no commercial value (ergo, they are shell companies), the treaty could be disregarded and tax imposed. The code allows Indian tax authorities to look at cases where the motive behind transactions seems to be to avoid tax liability in India.

“After a favourable verdict in the Cadbury case, the I-T dept can ask the firm to apportion the Indian share, pay tax.”
Pranay Bhatia, Economic Laws Practice

As of now, the tax authorities feel they have a strong case. According to tax experts, even in a global transaction where shares were not transferred in India, since Indian capital assets would change hands, it would attract capital gains and be taxed under Section 9 of the I-T Act. Specifically, they say, since Cadbury’s capital assets will now go to Kraft, there is a clear case. So, if the revenue-hungry tax department can establish a tax liability in the Cadbury case, it will act as a precedent for all transactions that have taken place in the recent past. “However, any such case is subject to express statutory exemption, if any, provided under the local income-tax laws of that country,” says Kanth.

It would be unprecedented, for sure, and controversial. “To the best of my knowledge, no other country imposes a tax on a transaction like the Cadbury-Kraft deal and a system to impose such a tax does not exist in any other country,” says Kanabar. Some experts even foresee of a huge negative impact on foreign direct investment into India and on deals where India is a part. “If you start challenging global M&As, it would be a big deterrent for companies looking at investing in India. In fact, people have already started looking at India as an unfavourable tax destination,” says Hegde.

But really, few can ignore a fast-growing Indian economy. Companies have already started formulating alternate strategies to factor in a tax risk into valuations that include India. This includes taking tax insurance, a practice that is followed in some cases globally. The market is taking note of the adrenaline rush of Indian tax department officials. With the Indian government closely looking at such deals on a case-by-case basis, expect many more battles that will keep lawyers busy. The big boys on Deal St. won’t be easily placated by those disarming four words: relax, pay your tax.