A terrorist attack on Amarnath yatris raises the security stakes 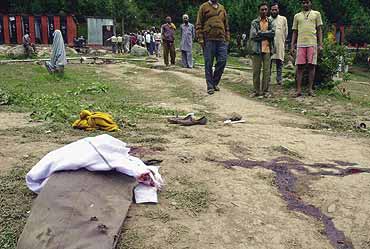 The attack on Amarnath pilgrims at Nunwan base camp, just outside Pahalgam, has once again exposed serious breaches in the security set-up. According to army sources, there were intelligence inputs hinting at a possible strike. This was confirmed by J&K governor G.C. Saxena, a former RAW chief. There had been "definite" reports about a militant strike, said Saxena, but how and when, it wasn't known. Still, the security structure was taken by surprise. This raises a crucial question: what steps did the authorities take to foil such an attempt, considering they had been forewarned?

The timing of the attack is significant. The militants struck when the state was in the midst of preparing for assembly polls and when security was on high alert. The success of the Amarnath yatra would have been an indicator that some level of normalcy had been restored. According to official figures, over 15,000 additional paramilitary troops had been detailed to provide security cover to Amarnath pilgrims with the army providing security cover across the thickly forested hills surrounding Pahalgam.

But the militants breached the security fence around the heavily guarded base camp just before dawn on August 6. Dressed like Gujjars, they sneaked in close, hurled grenades and fired indiscriminately. At the end of the carnage, nine pilgrims lost their lives and over 30 were injured. Many of the victims were still asleep when the militants struck. Army officials say the terrorists were hiding in the hills and their assault took the securitymen in the camp by surprise.

Threats to the yatra are not new. The annual pilgrimage to Amarnath has been a target for militants since the early '90s. Many yatris have, in the past, lost their lives in militant strikes. Every year, despite strengthened security, the pilgrims have been a soft target. This year, days before the yatra,...