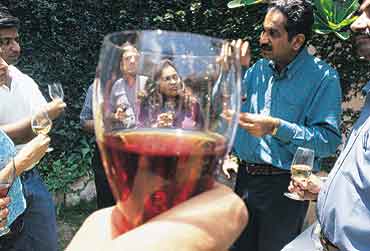 outlookindia.com
-0001-11-30T00:00:00+0553
I just love the not-so-subtle nuances of Boston Brahminism that infuse this whole business of social drinking. If I were to tell people I go around the countryside visiting beer distilleries, I would get pitying looks and a discreet nod to the nearest AA. But here I am tripping tipsily from Sauvignon Blanc to Rosé—and heck, I am nothing if not of the cognoscenti.

And the best part is you don’t need to go to France to do a vineyard tour anymore—it’s happening right here and now in aamchi Bharat. The enterprising people at tulleeho.com, an Indian website that claims single-minded dedication to the noble cause of informed inebriation, have tied up with Grover Wines in Bangalore and Sula Vineyards in Nasik to organise guided tours for desi drinkers, who remain unconvinced of wine’s soothing properties and are thus understandably reluctant to part with the crisp stuff in exchange for something called vin or worse.

If your first thought, like mine, is wine trail = freeload, then hold your horses a while. Yes, it happens, but only after you’ve conscientiously trudged all around the plantation—150 acres—and walked miles around the factory.

Okay, I exaggerate. You have to walk only about half-a-kilometre or so, and the trip is fascinating enough to easily ignore the thirst pangs. So, let’s start at the beginning. The 25-odd guinea pigs who board the bus at Bangalore are under the gentle charge of Trishna and Kumar, who hand out cookies and milk (they actually do) and later keep a benevolent eye on our glasses and gait. Of course, everyone, except hacks, has paid for the pleasure—Rs 1,250 per head buys you the tour, lunch at Angsana Resorts and the several glasses soaked up during the tasting.

Don’t wait for the road to dissolve into the deep moist green of a self-respecting vineyard—it won’t. It gets progressively drier and dustier till you disembark in an arid bowl hemmed in by distant grey hills and all around you is the fine red peninsular soil coating every leaf and grape and, soon, your clothes. It’s startling to learn that these 150 thirsty-looking acres yield around four lakh bottles a year—and can’t be none too bad wine at that, if you go by the fact that Grover exports about 30 per cent of its produce to France, the UK and the US.

Back in 1989, when the company decided to start making wine, it imported cuttings of 32 grape varieties from France. Of them, just four have so far survived the extreme Indian conditions to yield the Sauvignon Blanc, Shiraz Rosé, La Reserve (Grover’s flagship product, a Cabernet Sauvignon—Cabernet Shiraz blend) and Cabernet Sauvignon that Grover now produces. For these survivors now hanging in tight bunches of green and purple, the journey from vine to table will last 9-11 months, most of which will be spent inside icy-cold, giant steel vats, interrupted by short forays into de-stemmers, crushers, screw compressors, presses and the like. And thence to the barrel room, where the temperature is maintained at 15 degrees centigrade and the best wines reverently aged in huge oak casks imported from France.

While it’s heartening to hear Dr V. Patil, manager, R&D, extol the home brew as "every year a vintage year", sommeliers aren’t yet pronouncing these or other Indian labels with hushed reverence. Right now, Grover does sell directly to Indian restaurants and slowly diners are beginning to order, say, a light Indian rosé with their curries.

Reservations remain, as Anshuman, software engineer and wine buff, sniffing critically at his tulip glass, tells me sotto voce: "This Sauvignon Blanc is way too sweet and the whites are not stable enough." He admits though that this could also be due to retailer ignorance and, therefore, poor storage.

Right now, consumer ignorance is equally high, so vintners can get away with it. The per capita consumption of wine in India is a mere 0.007 litres per year—two tablespoons, as Grover vice-president Abhay Kewadkar ruefully puts it—compared to 61 litres in France and 59 litres in Italy. India’s annual consumption figure just about matches the production of one medium-sized winery in California or Australia.

This offtake isn’t exactly spectacular, which is the point of tasting tours like this one. Optimistically, vineyards are also asking state governments to waive excise duties on the grounds that wine is a "fruit-based beverage" or, like Maharashtra, to declare "wine park status" and grant a 50 per cent excise reduction. As for alcohol content, it ranges from a low 8 per cent in table wines to around 17 per cent in sherries. This is higher than the classic beers with roughly 5 per cent alcohol. Wines with higher alcohol content—fortified or dessert wines—include the famous ports: smooth, rich and with 20-30 per cent alcohol. Golconda reds and the Goan port wines can be roughly placed here.

It’s an uphill journey for Indian vintners—Chateau Indage, Grover and Sula being the major ones—but they hope that increasing disposable incomes will see tastes swerve. The problem might also be awareness, with wine snobs willing to pay through the nose for a low-quality foreign label rather than Rs 300-600 for a good Indian one. For this to change, Indian brands need to be acknowledged firmly among the New World wines—Argentinean/Australian/Chilean—something that’s only just beginning to happen.

Almost all of us on this tour have dragged ourselves from the whisky decanter to the corkscrew. Sitting around the tasting marquee, we attempt to swirl the liquid in our mouths and "neutralise our palates" with dinky bites of crackers. It doesn’t help. Despite the active gargling and encouragement from the production manager to smell the melon in the Rosé Shiraz and the cinnamon in the Sauvignon, it’s just one heady fruity flavour varying in degrees of sharpness.

The bottom line, and the only one that matters, is that it’s a happy-making (hic) drink, as IT geek Arun will doubtless testify. With a glass in each hand, Arun claims he can whiff the spice in one and the gooseberry in the next. Unlikely. What does happen is that the gratified guide pours him another glass of 1997 La Reserve so he can savour the oak.