Bell the Stray Cats; High Speed Crash ; The Big Blow Up; Throw 'Em Out ; What'll They Teach?; When The Parade Picks Up The Frock 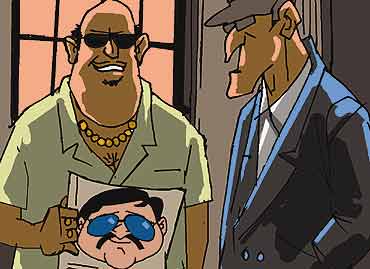 Early on July 11, a team from the Mumbai police crime branch landed an unintended catch. While the Mumbai police team was on the heels of Vicky Malhotra, a key aide of gangster Rajendra Sadashiv Nikhalje aka Chhota Rajan, they were surprised to find a former director, Intelligence Bureau (IB), with him. Apparently, he and Malhotra had met at a hotel near Connaught Place for breakfast and were on their way out when intercepted. Soon after the arrest, though, the retired IB director pulled strings, displayed his identity card and quickly left.

A day later, senior Delhi police officials claimed they had not been informed of the raid by Mumbai colleagues. Mumbai police commissioner A.N. Roy refused to comment and officials continued to be tight-lipped on the issue. However, Outlook has learnt that an ex-IB director did meet Malhotra to discuss a common enemy—Dawood Ibrahim. IB sources say the ex-director, who has long experience in operational aspects of intelligence gathering as well as extensive experience in anti-terrorism operations in Kashmir and the North-East, was a liaison to Rajan. In fact, that’s how Rajan apparently managed to mysteriously disappear from a Bangkok hospital bed after being injured in a shootout in September 2000. On November 24, while Rajan was awaiting trial in the hospital, he managed to escape, some say, with the help of Indian intelligence officials.

The intelligence agencies had their ears pricked after reports came in of the D-Company boss celebrating the marriage of daughter Mahrukh with the son of ex- Pakistan cricket captain Javed Miandad, Junaid. There were reports that Dawood would host an elaborate reception for the couple in Dubai, which led...