Datun is for all; On sentry duty; The cane packs a sting; The big layoff; Just not in the swing of things 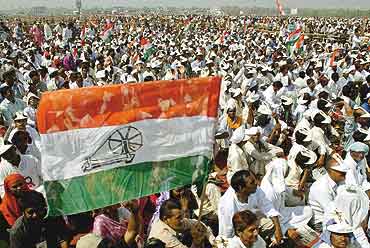 At worst political chicanery, at best a throwback to the days when the Congress could still put a great show on the road. That’s what the critics were saying. Still, if you don’t want to give the party credit, then call it an outpouring of affection for the Mahatma. Four lakh people who came to a nondescript coastal village in Gujarat can’t have got it wrong. The crowds wouldn’t stop pouring in even two hours after Sonia Gandhi’s chopper took off. Two words, ‘Dandi Yatra’, reverberated everywhere—on cellphones, trees, village posts, trucks, banners and in jam-packed guesthouses through the main South Gujarat towns leading to Dandi village. Never once on its 384-km route did the 75th anniversary re-enactment of the yatra look a ‘managed’ event. It all started though with some typical misgivings in the media. Questions were raised on why a certain category of VVIPS were lodged in luxury hotels while the 78 yatris representing the original 78 (who had walked the entire distance with the Mahatma in 1930) stayed in modest Gandhian accommodation. 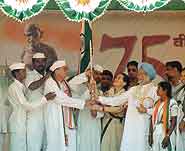 Congress president Sonia Gandhi and PM Manmohan Singh though maintained an air of solemnity despite the swelling ocean of people. The PM said he had come as a pilgrim and went on to remind everyone how Gandhiji had come to Dandi at the invitation of a Muslim family—showing how India stood for the unity of all. Sonia did one better, drumming it in that the major threat to India today was communalism. She talked of the spirit of Gandhiji, saying India’s heritage is all about gyan, aapsi ekta and vivek. You could say the yatra was another way of restoring Gujarat’s pride.