In the pipeline; Against the odds; Fear of factions; Leave the hills alone; Choking for oxygen in lake placid 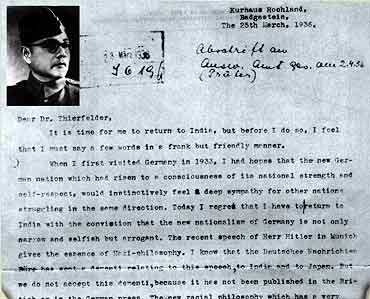 There has been much speculation on Netaji Subhash Chandra Bose’s position on fascism given that he did flee to Germany, met Adolf Hitler, and sought the help of the Axis powers in his fight against the British. But a letter that Bose wrote in 1936 has surfaced now—from the obscurity of a private collection—which elucidates his position on the subject. Bose wrote to Dr Thierfelder of the German Academy of Foreign Relations expressing his "disappointment" with the new Nazi philosophy.

The letter, dated March 25, 1936, is a testimony of Netaji’s unease with the "racial" philosophy of the Nazi party in pre-World War II Germany. Wrote Bose: "When I first visited Germany in 1933, I had hopes that the new German nation, which had risen to a consciousness of its national strength and self-respect, would instinctively feel a deep sympathy for other nations struggling in the same direction. Today I regret that I have to return to India with the conviction that the new nationalism of Germany is not only narrow and selfish but arrogant."

While the West has traditionally viewed Bose with suspicion due to his proximity to Nazi Germany and imperial Japan, there has been considerable debate on the issue in India too. In fact, at times even the Communist parties have attacked Bose for his links with "Japanese fascists". However, in the literature available on Bose, his letter to Dr Thierfelder has found little mention so far.

Not only does Bose state his personal opposition to Nazi Germany’s philosophy of racial superiority, but also says it is the view of "Indian nationalists in general". This subject has hitherto been dominated by a picture of Bose shaking hands with Hitler, seeking his help. The letter proves his complete opposition to Nazi agenda.