Assam's blowout; God's own city; Hot for curry; All in quick time; 1,121 and still bats to come 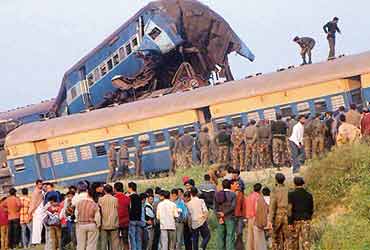 If there were any obvious reasons for the horrific train accident near Mukerian, Punjab, on December 14, it was the criminal negligence of the railways. They hadn’t upgraded or maintained vital infrastructure required for the smooth functioning of safety systems. The head-on collision between the Ahmedabad-bound Jammu Tawi Express and a local passenger train coming from Jalandhar killed 38 people and injured 100 more. The cause has been narrowed down to a malfunctioning block instrument signal system and lapses on the part of the station masters of Bangara and Chak Kalan railway stations. So, both trains hurtled towards each other on the same track.

Predictably, the two station masters along with their families went missing from their homes soon after. The railway police is on their trail. Digging work, for doubling of the Pathankot-Jalandhar link, had affected the block instrument system and the station masters were using the paper line system to clear trains. This system involves passing coded instructions on the wireless, and clearly some error had occurred.

For the kinsfolk of those killed and injured, the orphaned children, these technicalities have little meaning. The civil administration made their misery worse by tardy rescue and relief work. It busied itself escorting vips to the site and managing the crowds, and it was the villagers of Harsa Mansar who worked round the clock to provide relief. In appreciation of the services rendered by people of the village, the Punjab government has announced a special development grant of Rs 10 lakh. The army, the first to reach the site, too filled in the gap left by civil authorities.