News From The Mind's Abyss

News From the Mind's Abyss 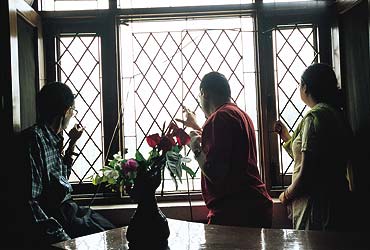 outlookindia.com
-0001-11-30T00:00:00+0553
Navin is poring over an Excel spreadsheet. He gestures excitedly at the computer screen, his eyes gleaming from behind a huge pair of glasses. "I got 80 per cent in my last test! In the next one, I’ll get 99." Though in his mid-20s, there’s something of a reawakened child about him. When he sees that we’re about to leave, he holds out his hand to say goodbye. "Please come again. I’m getting better."

Coming out from the tiny cyber cafe in the basement, you see living quarters marked by bare-bones furnishing—single beds and cupboards, plus one dining table and television set. This is Vishwas, a centre in Gurgaon for the psycho-social rehabilitation of people suffering from schizophrenia, intended as a ‘half-way’ point between hospital and home for those fighting a winning battle against a foe they cannot see.

Schizophrenia, which affects nearly 16 million people in India, is a debilitating mental illness characterised by "profound disruption in thinking and perceptions, affecting language, thought, perception and sense of self", according to the WHO. Though it has no permanent cure, proper medication and emotional rehabilitation for re-integrating the patients into society helps. At Vishwas, the ‘half-way home’ operating principle underpins all the activities. Whether it is occupational therapy, such as gauging Navin’s computer literacy skills, or counselling sessions, where the resident’s family is involved, the approach is a positive and integrative one.

While medical treatment for the disease is available in India, education and rehabilitation efforts have not yet been institutionalised on an equally large scale. "Especially so in north India, and Vishwas is one of the very few centres offering these," says Ashok Garg, a volunteer. Garg successfully overcame his schizophrenia a few years ago and has since been involved with the centre. In fact, Vishwas was brought into existence in 2000 by the collective efforts of families of victims of schizophrenia. Part of the Richmond Fellowship Society, a UK-based organisation dedicated to providing assistance to victims of the condition, Vishwas was initially funded by foreign grants but is now self-sustaining.

In keeping with its non-judgemental approach, the centre insists on the use of the word ‘member’ instead of ‘patient’ to refer to its eight residents. Another eight members attend the day-care centre at present, although Vishwas has a total capacity of 16 resident and 20 day-care members. The basement of the three-storeyed structure houses the cyber cafe and a vocational training station where members hand-print cards and make stuffed toys.

Admission to the centre is possible only after the member’s suitability for psycho-social rehabilitation has been studied by a panel of doctors. "We cannot accept people who display suicidal tendencies or violent behaviour since they will not respond to the kind of therapy being given here," says Paresh Shah, the project in-charge.

Members follow a structured daily routine that involves attending group therapy or ‘feelings’ sessions, performing small chores and undertaking vocational training. Group therapy is intended to help members rebuild interpersonal and communication skills through the sharing of feelings and experiences. Since schizophrenia can cause the loss of acquired abilities, rehabilitation efforts include occupational therapy, in which patients are taught simple trade and social skills in order to ensure gainful employment once they are resettled in the mainstream.

The process of rehabilitation usually takes between 12-18 months. People who’ve stayed at Vishwas have met with reasonable success upon their re-induction into the outside world, says Shah. You can contact him at: Vishwas, 291, sector 22, HUDA, Gurgaon—122015 (Haryana). Phone: 2369148.

Sharon's Stone On Our Heart