News For The Ticker 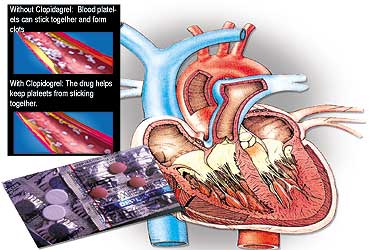 Last year, clinical trials in the US involving more than 3,700 patients found the drug clopidogrel to be more effective than aspirin in preventing blood from clotting in patients with high cholesterol. And in March this year, a worldwide trial involving 12,562 patients in 28 countries found that the drug worked even better if taken along with aspirin. Patients were randomly assigned to receive either clopidogrel plus standard therapy or just the latter. Standard therapy consists of aspirin, beta-blockers and cholesterol-lowering drugs, all proven to reduce the risk of dying in heart ailments.

The results of the nine-month trial are now available. Up to 11.5 per cent of those receiving standard treatment had died or had had a heart attack or stroke, against 9.3 per cent of those receiving clopidogrel as well. The benefits, the study concludes, are clinically important. Treating 1,000 patients for nine months, the study estimates, prevented 28 heart complications and required transfusions in only four patients. This treatment would also benefit heart attack victims who end up in hospital, 40 per cent of whom die or suffer a major heart attack within a year. Doctors claim the evidence is so overwhelming that people should go right ahead and use the treatment based on these results.