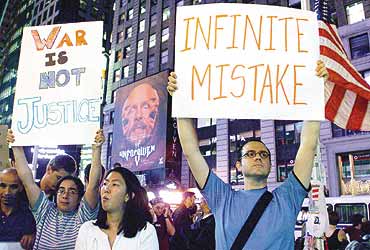 outlookindia.com
-0001-11-30T00:00:00+0553
Vast, unspeakable show and lesson," the self-appointed American bard, Walt Whitman, remarked of his beloved New York, as he catalogued its "hurrying human tides.... Curious questioning glances—glints of love". I thought of that, and much more, as I sat in London watching the television news on September 11, 2001.

I was born and raised in New York, and though I left America years ago, I still have family and friends there. Inevitably, anxieties and memories hung heavily in the air as the eerily crystalline images beamed into my home from across the Atlantic. In this I was hardly alone. New York has long been a world city, indeed the prototype of the teeming cosmopolises now found on every continent. I was only one of the many millions scattered around the globe who felt some personal link to the unfolding horror.

For me, the first meaning of September 11 was and remains simple. It was a soul-quaking reminder of both the preciousness and the interdependence of all human life. For a brief moment, in New York itself, that meaning seems to have floated in the wind with the dust and ashes. Spontaneously, downtown Union Square filled with wreaths, bouquets and handwritten messages calling for "peace not vengeance". Within days, this display was quietly removed by the city authorities. Its gentle humanism gave way to jingoism, bigotry, and peremptory demands on the rest of the world.

The incessant televised repetition of the images of the jets smashing into the towers may have brought home the horror to some, but the main impact was to reduce the tragedy to a packaged spectacle, easily assimilated and highly malleable. Without context, the images of September 11 lost their deeper meaning. In lower Manhattan, a woman emerged from a billowing smoke-cloud, her distress palpable. How could anyone perpetrate such a horrendous crime? she asked, then added, in a bitterly bewildered tone, "America doesn’t kill innocent children."

Many of her fellow New Yorkers could have disabused her of this illusion. Some three million of them were born outside the US. Not a few could have told her of the hell that was Central America in the 1980s, thanks to her government. Others could have told of the countless child victims of US policy elsewhere in South America, the Caribbean, the Middle East, Southeast Asia, Africa. Their voices, however, are rarely heard in America’s popular media. And in the wake of September 11, they became harder to hear than ever.

Americans are not the only people whose vision of other lands and cultures is cartoon-like, but in the wake of September 11, Americans’ widespread ignorance of the larger world and their country’s role in it did take on a peculiarly tragic weight. In what Gore Vidal calls ‘the United States of Amnesia’, the most fearful irony of September 11—that this atrocity was perpetrated by a force that the US itself had constructed and sponsored—was quickly and easily bypassed.

Visiting the city in mid-October, I discovered that a friend from Pakistan, a journalist resident in New York for many years, had been assaulted shortly after September 11 by a gang of white Americans—because he "looked like Osama bin Laden" (he’s clean shaven and short of stature). One reason he had settled in New York was to escape the unwelcome attentions of the US-backed fundamentalists at home. Through broken teeth and bruised cheeks, he ruminated on the irony.

Another friend, a lifelong New Yorker, wrote a private e-mail in which he gently questioned the wisdom of bombing Afghanistan—and was angrily reprimanded by friends and family for "aiding the terrorists". Meanwhile, the New York Post reported the defeat of the New York Yankees in a baseball game in Arizona with the banner headline ‘Yankees slaughtered in desert’. Above it was yet another photograph of the still-smouldering World Trade Center ruins.

Without history, without a wider awareness of global realities, many in New York confronted the devastation of September 11 intellectually disarmed—and easy prey to the forces that sought to capitalise on their suffering. Fear and insecurity are the weapons of choice for the political class worldwide, but it’s striking how persistently and effectively they are deployed in the US, a country with less to fear and less cause for insecurity than most. Or so it might seem.

There’s a long-standing global romance with New York—and as an erstwhile New Yorker I’ve always found it touching. But New York is not all Woody Allen, Friends and Sex and the City. And the seductive spectacle of personal freedom and adventure celebrated by Salman Rushdie is only part of the story. Yes, the city boasts a staggering 1,00,000 households with an income of more than $2,00,000 a year. But there are also more than half a million households with an income of less than $10,000 a year—and try living on that in New York. One child in three lives below the poverty line. There are districts where infant mortality rises to more than three times the national average. Then there are the 40,000 assaults reported to the police every year and the 80,000 cases of child abuse.

In contrast to the global romance, within the US, New York has usually been eyed with suspicion—much of it reciprocated by New Yorkers. This long history (charged with racism and anti-Semitism) was another guilty secret locked away after September 11, as New York became "America’s city", and even the usually victorious and therefore widely despised Yankees became "America’s team".

Any Washington administration perceived as over-generous to New Yorkers risks a political backlash elsewhere. For years, New York State’s government—more concerned about suburban Republican votes than the habitually Democratic urban hordes—has been depriving the city of finance. Only weeks after September 11, the state stripped the city of yet another $100 million in revenue. The cumulative result was a $5 billion gap in the city’s 2002 budget, and a wave of cutbacks in public services. All this as the federal government was spending $2 billion a month on its military campaign in Afghanistan—allegedly waged in the name of the people of New York—and lavishing tens of billions on tax breaks and bail-outs for giant corporations.

Inevitably, all kinds of people have sought to cash in on September 11. Never mind the souvenir postcard and tee-shirt vendors, never mind the high-fashion shops advertising ‘Buy here to beat the Taliban’, far more disturbing was the orchestrated corporate rip-off, extraordinary in its indecent haste and sheer rapacity. Taxpayers’ money flooded into the defence and security industries, into the airline and insurance coffers. In proportion, the victimised community, New Yorkers in all their diversity, received little.

Whitman called New York his "democratic island city", but in the elections for mayor held only eight weeks after September 11, a mere 27 per cent of eligible voters bothered to take part. The victor was a right-wing media tycoon who splashed out more than $50 million on his campaign—and has taken power with the support of 14 per cent of the electorate! He will supervise the reconstruction of the World Trade Center neighbourhood. It’s a safe bet that a small number of people will make a great deal of money from whatever plan the new mayor puts into action. Whether it will be of much benefit to the majority of those who crowd New York’s streets is a good deal less certain.

The pain and grief they endured as a result of the attacks of September 11 have been used by their leaders as pretexts for a bogus, brutal and self-serving ‘war on terror’. I can’t imagine a more obscenely disrespectful commemoration of the victims of Al Qaeda than the infliction of multiple World Trade Center-style horrors on the people of Iraq. Meanwhile, New Yorkers themselves will continue their myriad daily battles for survival and security, having far more in common with their counterparts overseas than many of them imagine.

(Mike Marqusee is a New York-born, London-based author of numerous books on politics and popular culture, including Redemption Song: Muhammad Ali and the Spirit of the Sixties (Seagull). He visits New York frequently.)