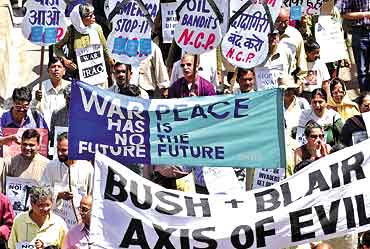 outlookindia.com
-0001-11-30T00:00:00+0553
Two weeks into the war on Iraq, various ministers in the government seem to be stiffening their stance against the United States. Foreign minister Yashwant Sinha thought the "war is a mistake, both for reasons of principle and strategy. It was wrong for coalition forces to go to war without a specific UN mandate." He further pointed out that "all nations were worried about the future and possibility of unilateral action by a superpower against anyone who it felt was going against its interests".

His statement ought to sober down those professional crystal-gazers who've been speculating about the "strategic opportunities" a post-Saddam world order holds out for India. Given the rift in the trans-Atlantic alliance, they argue, couldn't India exploit this divide and entrench itself in the US camp?

Such speculation has as its basis finance minister Jaswant Singh's endorsement of the doctrine of pre-emption barely 10 days after the US unveiled it last September. "Every nation has that right," he had said. Ironically, the US never tires of cautioning India against resorting to armed conflict with Pakistan, insisting that dialogue is the best method through which the two countries can resolve their outstanding disputes.

There's much hope that Washington would unequivocally demonstrate preference for New Delhi in the emerging new world (dis)order. Some feel the war in Iraq will lead to a reform of the United Nations and India will consequently be ushered in as a permanent member in the Security Council. But Richard Perle, a moving force behind the new thinking in Washington, recently wrote in The Guardian, "The chronic failure of the Security Council to enforce its own resolutions is unmistakable: it is simply not up to the task. We are left with coalitions of the willing. Far from disparaging them as a threat to a new world order, we should recognise that they are, by default, the best hope for that order, and the true alternative to the anarchy of the abject failure of the UN."

But Perle's coalition of the willing can scarcely be the basis for a new world order, comprising as it does countries (Azerbaijan, Eritrea, Estonia, Ethiopia, etc) which have little political, moral or economic clout. Initially comprising 35 countries, it does include the UK, Italy, Spain, Japan and Australia, both rich and powerful. But it is, a senior western diplomat remarks acerbically, "a coalition full of secret allies who offer nothing, do nothing and many do not even allow their names to be attached to the list". Clearly, this coalition of the willing is too ramshackle an arrangement to work as a credible alternative to the UN.

Assuming that such a coalition could play a significant role in the future, wouldn't India have gained by supporting it? "No," says an Indian diplomat. "Even if we were to play cheerleaders to the coalition of the willing, it isn't going to change the way others in the coalition—the Spaniards, the Italians—are going to look at us. No way."

South Block officials, however, admit that a divided political world suits India to some extent. But as a senior source cautions, "Those who are advocating full support to the US are unrealistic in thinking that the current situation provides a strategic opportunity to India, that all contentious issues would go away. Do we want to reduce ourselves to the stature of all those small countries in the coalition of the willing? We want to be one of the poles in a future multipolar world."

But this is easier said than done. "For a reality check," says a senior western diplomat posted in New Delhi, "can you imagine New Delhi in the current Security Council voting on Resolution 1441? You have to take sides. It is a hot seat. Your bottom will burn." Indeed, India has been less than forthright in condemning the Allied action.To assume a position of leadership New Delhi needs traits opposite to the timidity it has displayed.

Many feel that in a US-ordained new world order, India could exploit the doctrine of pre-emption to put an end to cross-border terrorism. "Preventive war!" scoffs a diplomat. "Once the world has already said no to the big guy, why would they give a green signal to us?" And supporting the US would have meant tailoring India's relations with other countries. For instance, were New Delhi to trim its sails to the American winds then the political effort to cosy up to Iran (which is in the US axis of evil) would come under immense pressure. What would India do if the US decides to target Iran? Stand up for Teheran like it has stood up for principles in Iraq?