Karunanidhi’s promise on Lankan refugees in India prompts a debate 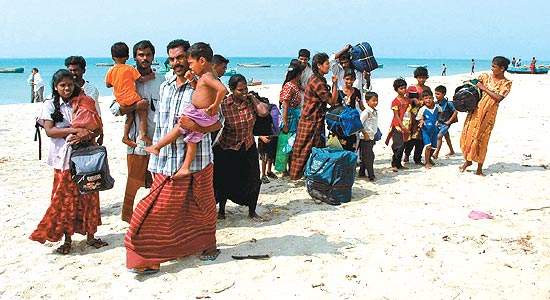 As demonstrated by recent geopolitics, sheltering refugees torn by conflict places special and tough demands on a country’s resources and society. But a declaration of political will, with an altruistic, moral stand at its core, has its own rewards. When Tamil Nadu chief minister M. Karunanidhi promised to take steps to ensure that the Centre would grant citizenship to the one lakh-plus Sri Lankan refugees who have sought shelter in the state for the last 25 years, did he think things through? This is the question that many in Chennai’s political circles are asking after he made the announcement at the valedictory function of the Anna birth centenary on September 26.

The statement has caused ripples in Sri Lanka, which is yet to find a solution to the 2.60 lakh Internally Displaced People forced into living in camps after its victory over the LTTE. Lanka-watchers fear that Karunanidhi, in trying to burnish his pro-Tamil credentials (which took a beating after the momentous events in Sri Lanka), may have got carried away and played into the hands of chauvinist forces in Sri Lanka. “The move may encourage Sri Lankan rulers to drive ethnic Tamils out of their country,” says Ashok Gladston, an expert on refugees at Chennai’s Loyola College.

Some think the DMK chief’s statement came as a riposte to Rahul’s visit. Others say he was countering AIADMK.

What made Karunanidhi make the announcement? One theory is that he was reacting to AIADMK chief Jayalalitha, who, apart from threatening an agitation in support of IDP rights, also said Karunanidhi has no right to organise the world Tamil conference in Coimbatore in January ’10 when he “never raised his voice at the massacre of Tamils in Sri Lanka.” According to her, the Lankan Tamils “are living in refugee camps in their own country and their struggle for self-determination was ruthlessly snuffed out by the Sri Lankan government with military aid and logistical support from an Indian government of which

Karunanidhi’s DMK is a vital component.” She alleged that Karunanidhi’s effort at organising the world Tamil conference was “nothing but a farcical charade for his self-aggrandisement.” Recently, the AIADMK demonstrated against the “inaction” vis-a-vis the IDPS and accused Karunanidhi of remaining silent except for “writing letters to the Centre”.
Karunanidhi has also been trenchantly criticised by pro-Tamil groups, including by P. Nedumaran, convenor, Sri Lankan Tamil Protection Movement, for supposedly letting the refugees down. Recently, the CM declared: “Nedumaran has heaped baseless charges on me. I can discern the intention of a plot to finish me off and shift the blame on Tamils in the world.”

One other theory, this one political, is that the DMK chief was miffed with the recent visit of Congress heir apparent Rahul Gandhi, who clearly was on a mission to revitalise the party, which last ruled the state 42 years ago. “This is his ingenious way of discomfiting the Congress and possibly laying the groundwork to go it alone in the 2011 assembly elections,” says a source. Currently the DMK and Congress are in alliance and Karunanidhi’s minority government is propped up by 36 Congress MLAs. Karunanidhi’s lofty declaration might well be a stratagem designed to test Congress’s reaction.

‘I’m No Westerner Shopping In The Divine Supermarket’