New Sticks In A Cart 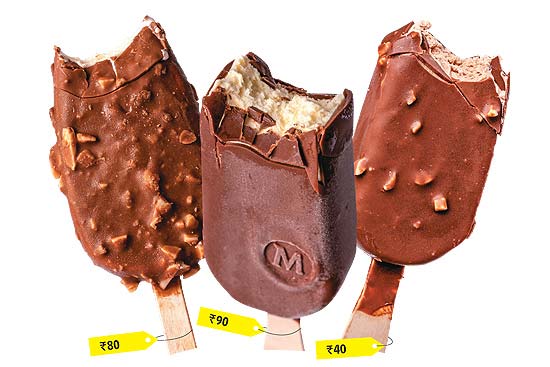 The mercury is inching upwards and yet to peak in most parts of the country but the ice-cream wars have already begun in neighbourhood schools, markets, shops and malls. The big players in the colourful popsicles and milk candies business have also chalked out plans to churn out new coolers from their carts. The Rs 2,250 crore organised ice-cream market is all set to sizzle with new launches: Kwality Walls launched the pricey Magnum, the world’s largest selling stick ice-cream, the rich cousin of our childhood choco-bar, at a whopping Rs 90 a stick. Mother Dairy in Delhi countered with their premium Belgiyum at Rs 80. And Amul launched Epic at a lower Rs 40 a stick. Across ads too, Kareena Kapoor is hawking Magnums, sold in their trendy new carts, while the Amul ditty preaches ‘real milk, real ice-cream’. According to Euromonitor, sale of premium desserts in India will triple to Rs 6,860 crore by 2017.

But is the Indian consumer ready to pay nearly a hundred rupees for what he may finally think of as ‘Lemenchu’? Yes and no. Food writer Priyadarshini Chatterjee says: “Considering the growing number of options in terms of brands and flavours, we can only say the weather looks great for ice-creams. Many urban consumers are keen on having access to these innovative world brands and they are ready to pay more, even it if it is stick ice-cream.” Agrees management consultant Harminder Sahni, a fan of Magnum. “I think it’s fine to spend 90 bucks on a Magnum once in a while, to take a break from the 20 bucks choco-bar. In a growing market like India, companies can still experiment with various price ranges. Kwality Walls and Amul are just providing more options,”  he says.

But R.S. Sodhi, managing director, Amul, feels premium ice-creams will remain a niche segment in the urban market. He says the target audience for the recently launched Amul Epic is quite clear. “We are targeting the youth, teens and young couples. But by making it affordable we expect more consumers.... Our products do not come under the super premium seg­ment. Magnum, Hagan Daz, Ben, London and Jerry are premium brands but currently have a very niche market, with very limited presence in metros,” he says. The high prices of these summer-time coolers has also mounted, thanks to the Union budget, in which transportation of milk products has been brought under the service tax ambit. Thus, ice-creams have a service tax of 14 per cent applicable on them today.

Yet the premium segment is where the action is, with cool new players diving into the competition. And it’s not just the stick ice-cream segment; sit-in high-end ice cream parlours are also on the rise. Gelato Vinto, the natural Italian frozen dessert maker which claims to be 96 per cent fat-free and which supplies products to India’s top hotel chains such as Hyatt Regency and Leela Kempinski, plans to roll out 200 outlets in the next five years. It has about 500 flavours which sell in the major malls. Now they plan to sell their desserts in shop-in-shops, tying up with popular quick service restaurant chain Subway. US-based gourmet frozen dessert makers Mini Melts, which operates in 25 countries, was launched in Bangalore this year. After opening in Chennai and Hyderabad, it’s aiming at 1,200 outlets across India in the next three years. Baskin Robbins, the leader in premium ice-creams with over 500 outlets in the country, plans to add 100 more this year. Many of these brands also plan to expand to smaller towns.

A scorching summer may be upon us but at least there are delights to soften its energy-sapping blow.

“Why Is The Media So Scared?”