No burning issue, but caste and carrots, confronts Andhra voters 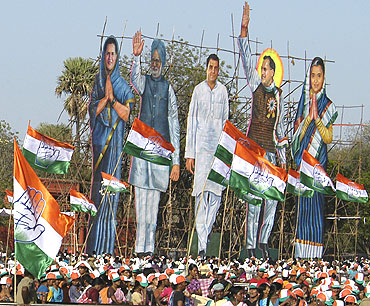 The Congress government’s development schemes in rural areas have found some resonance. The only advantage that former chief minister N. Chandrababu Naidu seems to enjoy derives from an unlikely alliance with the Telangana Rashtra Samiti (TRS) and the Left. The TRS demands a separate state of Telangana, while the Left parties have traditionally been hostile to the idea. Their coming together might signal short-term political pragmatism, but the alliance is certain to come under severe strain after the elections. The TRS went with the Congress in 2004 and its alliance with the TDP will afford the latter some electoral benefits in Telangana. The Left also has pockets of support in the region, and together, the Grand Alliance is certain to put pressure on the Congress there.

In the rest of the state, especially in Andhra and Rayalaseema, the contest will be a three-cornered one between the Congress, the Grand Alliance and the PRP. Chiranjeevi’s party has come to articulate the aspirations of the Kapu community, the single largest community in AP, who have, for long, resented the dominance of the Kamma community represented by the TDP and its leadership. Traditionally with the Congress, the Kapus are certain to vote for the PRP. The PRP has not been free of troubles either. Its lack of an organisational structure, recent desertions by senior members and mismanagement in ticket distribution has compounded its woes. Some dissatisfied Kapu voters are likely to return to the Congress fold, but their numbers might not be considerable. The Kamma vote deserted the TDP in 2004, but the PRP’s emergence is likely to bring them back to vote for the TDP, especially in southern AP and in pockets of its stronghold in coastal districts. But despite implosions within the PRP, it is likely to get a sizable chunk of the Kapu votes.