After 15 years in world cricket, his image, sadly, is one of a giant who never rose to his full Carribbean stature. 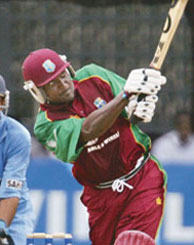 For the latter two, cricket was always a game, never war. Hooper, likewise, is the quintessential amateur in an era of ruthless professionalism. Even today, Hooper looks a world-beater when the mood seizes him. Like most batsmen of his pedigree, Hooper here took a stuttering start. But, once obligingly missed by Deep Dasgupta behind before he had troubled Mohandas Menon (statistician), Hooper brought to his batting a willowy virtuosity that convinced viewers that class knows no age-bar (Carl turns 36 on December 15).

Yet, Jamaican Michael Holding had been insistent that he would do no commentary in any Test or odi in which Hooper again played for the West Indies—after Carl, as a creature of impulse, so controversially returned to the national Caribbean team as captain. That even Holding felt impelled to rediscover Hooper as a presence in the Windies team is a measure of how much this stylist could accomplish once he set his mind to the task. Yet, a Test career return of 5,662 runs from 170 innings in around 100 Tests at 36.53 is at best reflective of the Michelangelo pronouncement: "The greatest danger for most of us is not that we aim too high and we miss it, but that it is too low and we reach it."