Bollywood was, and is a secular place, the Khans an enduring part 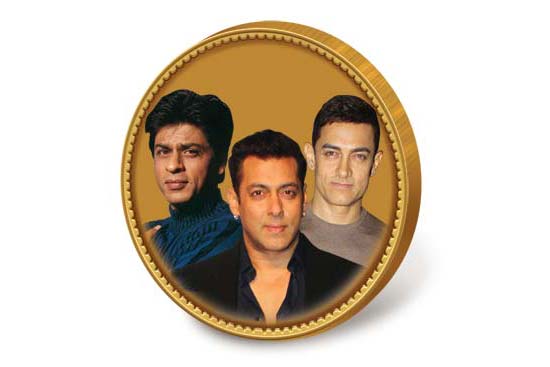 When a young and callow Yousuf Khan met his mentor Devika Rani, the formidable chief of Bombay Talkies, she told him she had selected a new screen name for his debut—Dilip Kumar. “She went on to tell me that she foresaw a long and successful career for me in films and it made good sense to have a screen identity that would stand up by itself and have a secular appeal,” the thespian writes in his autobiography The Substance and the Shadow. That was in 1942. The country was in the throes of political upheaval and social turmoil. In the film industry, the heroes were all Hindu, the heroines almost all Muslim. Yousuf Khan would have been a standout name. For decades after that, barring Feroz Khan and Amjad Khan, the names of the male stars remained Hindu.

Cut to today. The big screen is dominated by the Khans. If moviegoers cared at all in the ’40s, they certainly don’t bother about this now. For nearly three decades, audiences in India have thronged to see the Khans without a thought to their name or religion. Sadhvi Prachi, who has exhorted fellow Hindus to tear down their posters and boycott their films, is wasting her breath. Even in those politically and communally char­ged times of the ’40s, the Hindi film ind­ustry was a melting pot of religion. Parsi producers and cinema owners, Muslim scr­iptwriters, Anglo-Indian and Jewish actresses and Hindu actors were the norm. Post-partition, several Mus­lims from the film industry moved over to Pakistan, but many more didn’t.

There are countless examples of how this melding of cultures reflects on the screen. Whether it is the immortal song in Baiju Bawra (1952)—Man tadpat hari darshan ko aaj, written by one Muslim (Shakeel Badayuni) composed by another (Naushad) and sung by a third (Mohammed Rafi) or Manmohan Desai’s cheesy entertainer Amar Akbar Anthony (1977) or PK, a satire on religion, directed by a Hindu (Raju Hirani) and starring Aamir Khan, Bollywood was and remains a secular place. In the last 25 years, the period that coincides with the domination of the Khans, the country has undergone many convulsions, but not once did the impact of all this reach Bollywood. One might legitimately argue that Hindi cinema skirts around sensitive political issues, but never has the industry faltered from its secular course. It wouldn’t make commercial sense, for one thing, but after so many decades, the notion of diversity--on screen and off—is hardwired into its DNA.

The Khan threesome epitomise that culture. They romance girls irrespective of where they come from (though the females get younger and younger.) Two of them, Aamir and Shahrukh, are married to Hindu women. The third, Salman, celebrates all festivals with equal fanfare. His extended family is famously multi-cultural. Their fans are not limited to one religious group or the other. There is no fuss about sectarian quotas during awards, a la the Oscars, where the question of race often tends to crop up. The careers of these have traversed from the old India to the post-’91 generation to now, the era of smartphones and social media. India has undergone dramatic changes during this period, economica­lly and socially. With greater prosperity has come more conservatism. The right wing—from every religious group—is no longer in the shadows. There’s a lot of loose talk, encouraged by powerful figures, of debating constitutional secularism. Through all this, the Khans’ popula­rity stays unchallenged; if and when they fall, it’ll be because they stop del­ivering hits, and the producers and audiences move on to the Kapoors and Roshans.

Much credit must go to the Khans. To remain relevant to succeeding gen­era­tions at a time when everything bec­omes outdated so rapidly calls for a remarkable ability to reinvent oneself. But much credit goes to the fans too, for thronging to their films and voting with their feet; no sadhvi can challenge that. Barring minor shifts, each one has been consistent with his overall persona, each fulfills a need in the audience’s heart. But none has bothered to position himself as spokesperson for his community; nor does anyone expect him to. Corres­pondingly, no Hindu star sets himself up as a flagbearer of the Hindu cause. Religion remains a personal matter, as it should be. Can we continue to withstand the repugnant provocations of the sundry sadhvis and yogis spewing communal hat­red? Will our film industry too one day fall victim to this constant brainwashing? I remain optimistic, perhaps foolishly so. But when I see vast numbers of youngsters from all over India taking selfies outside Mannat, hoping to catch a glimpse of Shahrukh, I know that Prachi’s bilious message will fall on deaf ears.

(Sidharth Bhatia is the author of India Psychedelic: The Story of a Rocking Generation.)