In his bid to appear 'fair', I&B minister Jaipal Reddy earns the ire of the Left and saffron right in equal measure 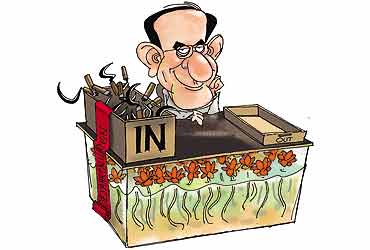 The liberal in the Union cabinet perhaps thinks the term implies someone who manages to constantly annoy both ends of the political spectrum. Either that or the UPA's information and broadcasting (I&B) minister S. Jaipal Reddy has taken Prime Minister Manmohan Singh's line of equal distance from the "left and right fundamentalism" too literally. Nothing else explains the minister's gradual shift from complete inaction to sudden fits of 'detoxification' that have invited the wrath of the right and are seen as 'too little, too late' by the leftists.

While the Left has clearly spelt out the names of the people they want out of the departments headed by Jaipal, the minister says he has to be fair in taking any decision. When contacted by Outlook, Jaipal said: "The government cannot be seen to be biased. There is a certain procedure involved when people are appointed in institutions. That procedure cannot be circumvented."