A grassy mound at Fatehpur Sikri yields a new palace. Is it Tansen's abode that was lost in the abyss of time? 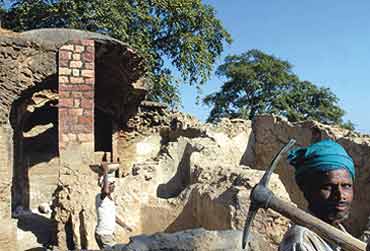 The Archaeological Survey of India (ASI) has stumbled upon the buried remnants of a palace in the sprawling 16th-century complex that may have been the home of legendary musician Tansen, one of the 'nine jewels' of Akbar's court. "The style of construction confirms that this place must have been owned by an important person in Akbar's court," Dr D. Dayalan, superintending archaeologist, ASI (Agra circle), told Outlook.

The palace has a number of big hamaams and a sophisticated system of water management, which according to Dayalan are clear signs that it belonged to someone who really mattered. While Dayalan and his team are yet to unearth firm evidence that this is indeed Tansen's palace, its location adjacent to the Tansen Baradari—a beautiful red sandstone pleasure pavilion with twelve arches that local tradition has always associated with the court musician—leads archaeologists to believe the newly revealed building was, in all probability, Tansen's abode. "There are steps leading from the Tansen Baradari to this palace. The obvious inference is the person who used the Baradari also used the house below it," says an excited Dayalan.