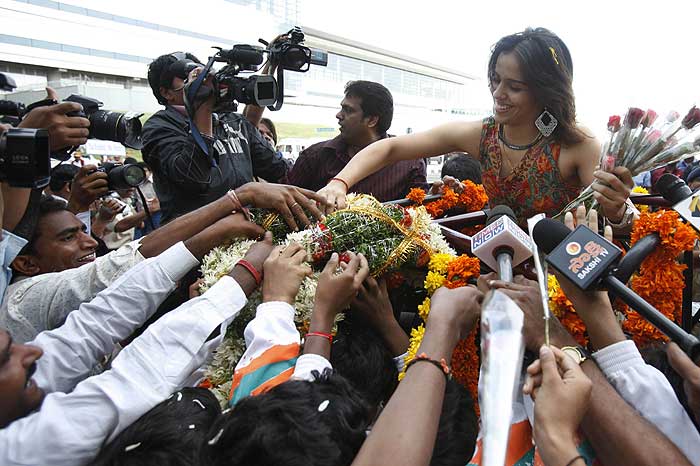 It’s a tale of two girls from one city. In their chosen professional lives, it’s the best of times for one; the worst of times for the other. Saina Nehwal seems to be ascending the final steps to the acme of her sport, badminton. The other Hyderabadi of our story, Sania Mirza—earlier known as a tennis player but now essentially a celebrity who asks questions of contestants at beauty pageants, appears in advertisements or hotly denies endorsing gutka products in Pakistan—seems to inhabit a slippery spiral of decline.

The contrast between them was stark over the last few days. As India feted Saina for winning in a row three Super Series badminton titles—Indian Open Grand Prix, Singapore Open and Indonesian Open—and becoming the world No. 3, news trickled in that Sania, true to unfailingly indifferent form, had been knocked out of the first round at Wimbledon. The careers of the two girls, almost homonymic though made distinct by a pliable syllable in their names, are moving rapidly in opposite directions. At 20, Saina has a world of success to look forward to. Sania, already India’s greatest ever woman tennis player at age 23, seems to be tragically puffing and plodding her way to the end of the road as a sportswoman. Once at a career high of No. 27 in the world rankings (in 2007); she’s now down to 111. She has had a troubled, uneven career, and is plagued by a persistent wrist injury. The buzz in the tennis world is that she’s going to find it very, very tough (read ‘impossible’) to reclaim the heights she reached five years ago.