A sudden spurt in Haryana’s crime points to an administration that lacks in political will and is pressured by caste politics. The CM, though, will ‘remain’. 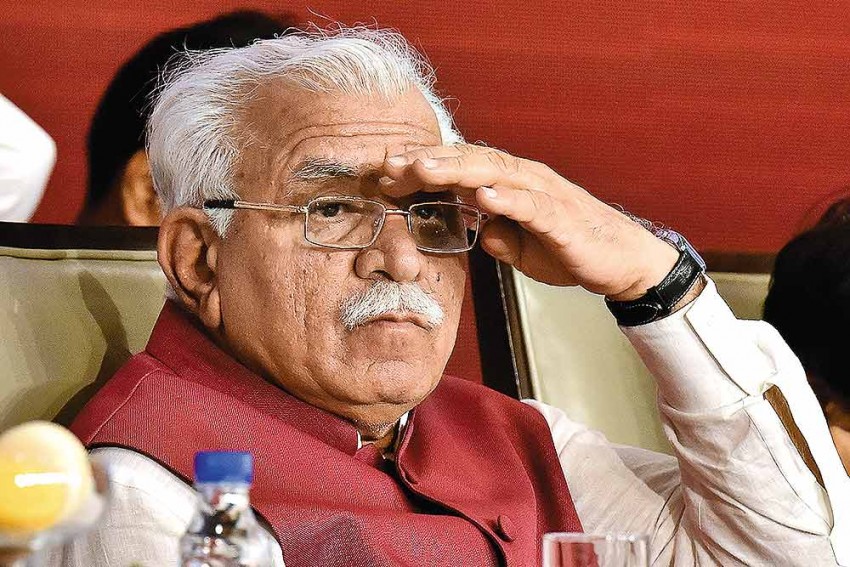 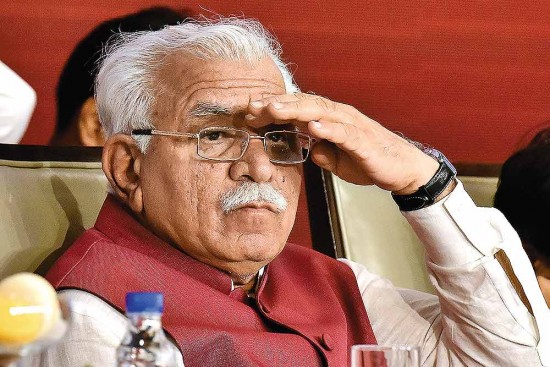 Barely 40 kilometres from where a Haryana school principal was shot dead by a student on the weekend before this Rep­ublic Day, hundreds of spirited people gathered on a mission at two villages sitting cheek by jowl along the northern Indian plains. A chunk of them are sadhus and their followers—and remotest in their minds is a murder that had happened in the nearest town only the other day. In fact, the entire belt has of late been reporting gruesome crimes besides the January 20 instance at an educational institution, named after a 19th-century monk-philosopher who held his guru in high esteem. Swami Vivekananda School in Yamunanagar had on that wintry Saturday seen an enraged class-12 boy spraying bullets at the headmistress in her room.

The saffron-clad men and their hordes of disciples had converged at Mugalwali and its twin Adi Badri as part of the state government’s multi-crore mission to revive an ancient mythical river that has always generated ripples of reverence among Hindus. The Saraswati Heritage Project did also bring into the crowd a handful of historians and some mechanised earth-diggers. It was on January 18 that Haryana chief minister M.L. Kha­ttar launched a five-day Interna­tional Saraswati Mahotsav by performing a yagna, along with Union transport minister Nitin Gadkari. Since then, hunt has intensified to retri­eve the Rigvedic Saraswati that is believed to have dried up some 4,000 years ago.

Not all are amused with the Bharatiya Janata Party regi­me’s focal engagement. Especially, the Opposition Congress. “Wish the government had shown so much enthusiasm in hunting down criminals and making the women of Haryana feel safe,” says party leader Bhupinder Singh Hooda, who was CM for two consecutive terms before Khattar took charge on October 26, 2014. With 10 rape cases reported from different parts of the state in as many days—incl­uding three of brutal gang-rape and murder—questions are being raised over Khattar’s ability to control the law and order situation in general and the crimes against women in particular.

The disturbing visuals of little schoolchildren crouching and sobbing inside their bus when vandals hurled stones at it after burning down another public transport vehicle were probably the tipping point. The perpetrators, alleged to be members of the Karni Sena, were protesting the release of Padmaavat. That act by the fringe Hindu­tva group in the name of a controversial movie outraged even certain right-wing political comme­ntators. Someone like Kanchan Gupta felt the need for the prime minister to act.

The foggy month was to end with another image that disgusted many. In Panchkula of Haryana’s capital Chan­digarh, occ­upying a proud place on the dais during district-­level Republic Day celebrations was a former top cop who the Supreme Court had convicted in a molestation case. S.P.S. Rathore, earlier director general of police, was found guilty of molesting tennis pla­yer Ruchika Girhotra, driving the 14-year-old to suicide. Ruchi­ka’s fri­end Aradhana Gupta reportedly found his presence at the official function a disgrace. “He must have been an invitee. It’s so shameless on the part of the local administration,” she is reported to have said. “By endorsing such criminals, the administration is giving direct encouragement to such crimes.”

So, is the administration not just unable to firmly act against miscreants but is even somehow being complicit with them? Retired IPS officer Prakash Singh believes the crux of the problem is lack of political will to enforce law and order. The former Uttar Pradesh DGP, who headed a probe into “the role of officers of civil administration and police during the Jat reservation agitation” in February 2016, finds the Haryana admi­nistration taking a strange viewpoint. “During any law and order situation, it tends to look at the cost equation in terms of the vote bank, political colour of the villains, their caste, community and religion,” he adds.

Haryana police is very strong, but it is poorly guided, ex-top cop Prakash Singh says. “An army of lions led by sheep.”

Prejudices towards communities refl­ect in all investigations, including those of rape and murders. Breaking down his analysis, Singh, 82, says, in case of the Jat agitation, for example, caste bias prevented the government from taking timely action. “The state administration is dominated by Jats. They comprise more than 40 per cent of the police constabulary,” he says. Singh’s report had indicted 90 civil and police officials, including IAS and IPS officers, for failing to act during the Jat agitation that killed 31 people. There are also reports of nine women being gang-raped during the agitation period in Murthal.

The Haryana police, Singh tells Outlook, has tremendous potential. “If properly trained, it can even take on the Taliban. It has the best human element, but no leadership—neither from the IPS officers nor the politicians,” he rues. “It’s an army of lions led by sheep. That is why Haryana has been tripping up badly for past three years.”

As for the situation leading up to Gurmeet Ram Rahim’s arr­est in ­August last year, Singh says it’s clear that no action was taken since the powerful guru-actor had supported the BJP in the polls. About the Karni Sena’s anti-­Padmaavat stir, he believes that the ruling party is going soft on the Rajputs owing to elections in Rajasthan where they are a dominant community. “No preventive action was taken. It does not reflect well on the government,” adds Singh.

The attitude of Haryana government, according to him, has been “chhedoge toh badhega (if you try to control the situation, it will aggravate).” This finds some resonance with BJP general secretary Anil Jain, in charge of the party’s Haryana affairs. Considering the history of Hary­ana, “one can’t be careful enough”, he says, giving the exa­mple of another ‘godman’ Baba Rampal, who was apprehen­ded in 2014 from his Barwala ashram amid heavy security. That arrest had followed a fortnight’s standoff between his followers and the police, injuring over 200 people. “The government couldn’t implement the court’s order for nearly two weeks, because it would have led to deaths,” Jain says. “That’s why we were being careful in the Ram Rahim case.” 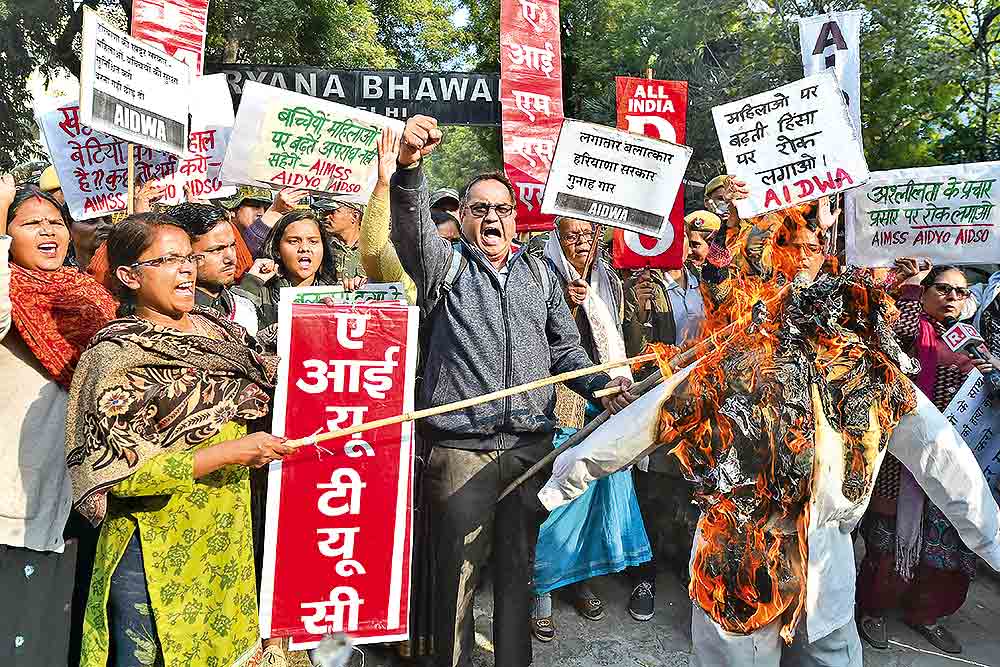 Social organisations hold a march in Delhi against the Haryana violence

Hooda counters the “being careful” theory. According to him, the government is direction-less and ineffectual in handling law and order. He says the administration does not act timely and then calls in the army. “Army cannot be used for routine law and order situations. Will it call in the army to control crimes against women too,” he questions.

Hooda says the number of rapes and other crimes against women has gone up in the past three years. According to the National Crime Record Bureau (NCRB), Haryana repo­rted 1,189 cases of rape in 2016. These include 518 cases of sexual violence against minor girls. Jain counters it, saying sexual violence exi­sted when the Congress was in power too. “Society actually has a vital role to play (in reforming),” he says.

According to Jain, rapes by persons known to the victim don’t reflect a law-and-order breakdown. “Ones, like the Gurgaon rape (where on January 21 night a woman was dragged out of the car and raped in front of her husband and bro­ther-in-law), involve dabangayi (brute bullying). Such cases have come down. The government is alert and quick to take action,” he insists. About the school bus attack, Jain insists it was accidental stoning. “The target was the state transport bus,” he says, adding the police have nabbed 15 persons, who “prima facie do not belong to the Karni Sena”.

BJP’s Haryana spokesperson Raman Malik talks about an improved sex ratio in the state under Khattar administration. “Our schemes like ‘Beti Bachao, Beti Padhao’ have been hugely successful and the 2017 sex ratio of 914 women to 1000 men is the best-ever,” he says. Each district will have a women’s police station and more women officers are being inducted. “As many as 850 women have been inducted; another 1000 will be added by next year,” he says, blaming the “brown sahibs” or the bureaucracy for a slowdown in the process.

Also, the Haryana government is implementing a new ‘Shakti Pari’ (Power Angels) scheme in some villages. Under this, five girls from each village will be identified and trained so as to keep vigil on miscreants. “They will identify the trouble-­makers and report to the sarpanch. The local police constable will also be a part of the exercise. The miscreants will be counselled, their parents informed and, if need be, arrested,” Malik explains. “This scheme effectively combines community participation, pol­icing and social rebuilding.” Further, for improved social fabric, schools have begun moral science lectures, as has the teaching of the Bhagwad Gita, which “is the GPS to life and life situations”.

Hooda snubs all of it, calling the Khattar government a mere event management company. “It has spent crores of rupees organising the International Gita Mahotsava in Kurukshetra city (November-December, 2017). It is spe­nding big in the name of Saraswati and cow protection,” notes the septuagenarian ex-CM, who has been demanding dismissal of Khattar government (for which he met state governor Kaptan Singh Solanki rec­ently). “The CM is the head but no minister listens to him. That is why there is no coordination and cohesive action,” Hooda says. The BJP seems to be standing firmly behind the CM. “Khattarji will remain the CM,” reiterates Jain. “No change in that.”

The Khattar Government Report Card
Law and order has never been good. Of late, it has clearly worsened. Here’s how: Violence and pitched battles between security forces and supporters of ‘godman’ Baba Rampal in the run-up to his arrest in Barwala, Hisar. Some 200 people, including policemen, were injured. Violence during the Jat agitation over demand for reservations. Reported gang rape of nine women in Murthal during the agitation. The protests caused a loss of Rs 34,000 crore in north India and death of 30 people. 10 rapes reported in as many days from across Haryana including gang rapes-cum-murders of Dalit and minor girls. Cases include rape and mutilation of a 15-year-old Dalit girl in Jind, abduction and gang-rape of a woman in a moving car in Faridabad and the rape of a woman in Gurgaon after she was pulled out from a car and her husband and brother-in-law held captive. Ritu Chhabra, 47, was sitting in her office room on January 20 School bus attacked in Gurgaon, allegedly by Karni Sena members protesting against the release of Padmaavat