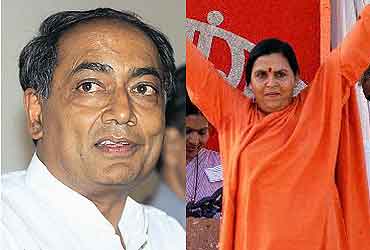 In Delhi last fortnight to finalise the list of candidates, Digvijay was out of character—irritable and aloof. Uma, on the other hand, kept her turbulent temper on a leash. He's talking cows and temples; she development. The face-off between two of MP's most colourful political personalities, the sadhvi and the Raja, makes for titillating TV bytes. But away from the media spotlight rages the grimmest, grittiest electoral battle ever. A tug-of-war that Digvijay appears to be losing, inch by reluctant inch. But Congressmen say it's too early to write off the master manipulator who's known to spring surprises.

A strong anti-incumbency factor has given the BJP a clear edge in MP, say senior party leaders. A generous monsoon mitigated public anger over the Congress government's neglect of infrastructure, but couldn't dispel it altogether. The BJP has ensured the electricity crisis during the exam months, the water riots in the summer and the disintegration of rural roads remain at the top of the voters' minds even six months later. Decentralised administration, the Congress usp in the last election, has lost its lustre, thanks to charges of large-scale corruption at the district level, says BJP leader Prahlad Patel. Digvijay no longer appeals to the urban and semi-urban voters—hardest hit by the lack of infrastructure and utilities. For the BJP, the biggest challenge is the CM's rural party machinery that has penetrated right down to the panchayat level.