It was a world-historical moment. The only way to breach the iron curtain back in 1990, during Mandela’s release, was to go through his old network of comrades. 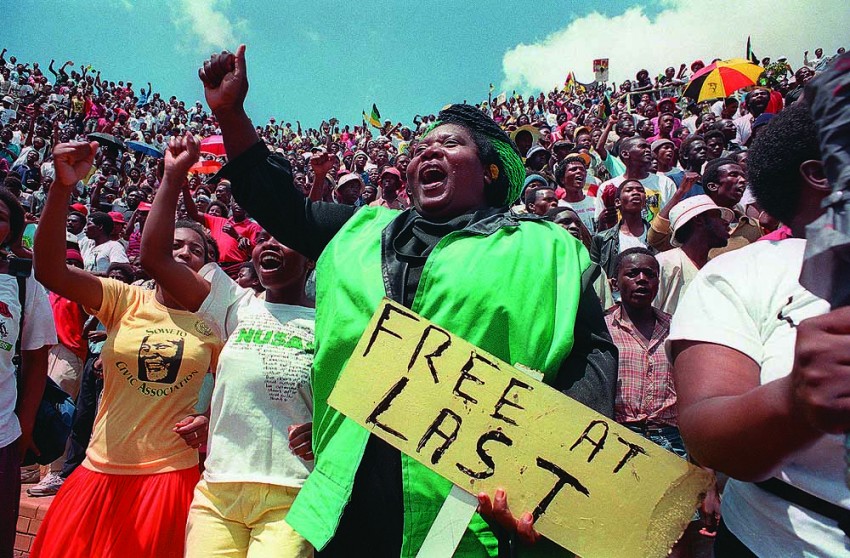 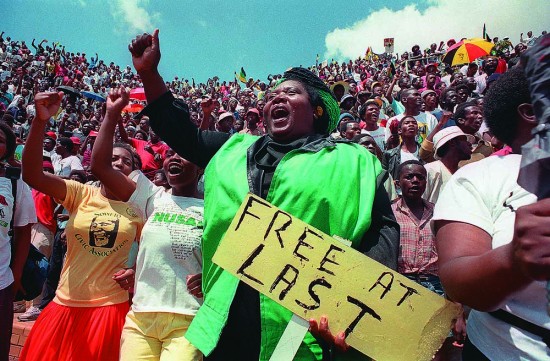 It was the Prime Minister’s banquet in honour of Nelson Mandela in March 1997, at New Delhi’s grand Hyderabad House. He had come to sign the Red Fort Declaration on a Strategic Partnership between the two countries. The Prime Minister, H.D. Deve Gowda, was escorting Mandela along the row of Indian guests, introducing each one to the South African President. When he reached me, he mumbled something, as if half-asleep. “He was in your country recently,” or words to that effect.

After shaking my hand, Mandela moved onto the next guest. He then paused. He seemed to have recognised my face only after the Prime Minister’s indistinct introduction registered with him.

He then took a step back and made eye contact with me, direct and strong. “You know, Yusuf is no longer with us.” He did not say “Yusuf passed away” or that “Yusuf is no more”. There was that typical Mandela sing-song about the sentence. The “Yusuf” Mandela was referring to was Yusuf Cachalia, younger brother of Molvi Cachalia, who was a close associate of Yusuf Dadoo, and his protege, Mandela himself. They were all builders of the South African Communist Party, whose links with the African National Congress were left vague for tactical reasons.

The two Cachalia brothers were part of the anti-apartheid movement after the Second World War. Additionally, they had direct ties with Gandhi. Their father, Mohammed Cachalia, was a close associate of Gandhi, and figures prominently in his South Africa memoirs. They had one Indian dream: that a street in their ancestral village in Kutch, Gujarat, be named after their father. (When every trick in the book is being tried by all political parties to entice the Muslim vote, here is a potentially high-scoring one for the arch Gujarati, Narendra Modi, to take note of.) 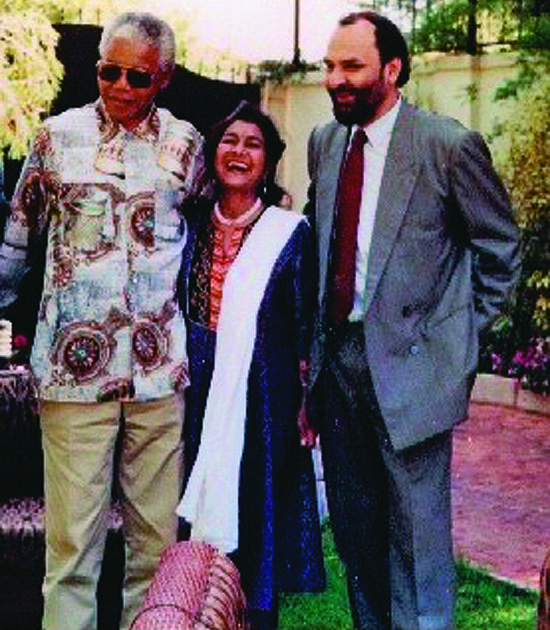 The author with Amina and Mandela

It will take a psychoanalyst to divine why Mandela told me about Yusuf Cachalia’s death. I had never met him with Yusuf Bhai. He had arranged several meetings with Mandela through his friends like Archbishop Des­mond Tutu or the late anc-Communist Party ideologue, Walter Sisulu. But he himself had never escorted me to meet the iconic South African. His wife, Amina Cachalia, had—both when Yusuf Bhai was alive and after his death.

Mandela’s release was a pathbreaking story. Even Rajiv Gandhi was excited. He thought the story should be covered on TV.

And thereby hangs a tale.

I first met Yusuf, Amina and their son Ghalib in their elegant bungalow in Johannesburg—days prior to Nelson Mandela’s release from Victor Verster prison outside Cape Town, in February 1990. That we actually saw Mandela walk out of the prison waving to thousands waiting outside was because Yusuf and Amina had made all the arr­angements for us to witness this unforgettable bit of history. At that stage, I had no idea of the subtext of the Mandela-Yusuf-Amina relationship. I lea­rnt much later it had the haziest outlines of the eternal triangle. Mandela was as great a gentleman as he was a man of robust appetites. He took great care that his friend Yusuf was never cuckolded. That is why the Mandela-Amina affair flared up only after Yusuf Bhai’s death in 1995 and years after his own messy divorce from Winnie Mandela.

Let me revert to the first meeting with Yusuf and Amina in Jo’burg. Yusuf Bhai (as I began to address him, such was the spontaneous, mutual warmth) had sent two employees from his office to receive what was to be the first ever Indian TV team to visit South Africa. For Indi­ans, apartheid, not the Soviet Union, was the real iron curtain! Difficult to believe, but two decades ago, in 1990, there were no independent, multiple TV stations. I’d persuaded Doordarshan, the solitary official TV channel, to do an interview-based foreign affairs programme.

Nelson Mandela’s release after 27 year of prison was a path-breaking story. Even Rajiv Gandhi was excited because he had worked hard with African frontline states for South African freedom. He thought the story should be covered on TV. Arundhati Ghose, the dynamic joint secretary responsible for Africa, arranged for special passports to be issued. The normal passport in those days was quite emphatic about this: valid for all countries except South Africa.

The new passport would enable me and my crew of four to reach Johannesburg airport. What lay on the other side of the immigration turnstile was the dark, mysterious world shrouded in apartheid. It was, for us, the forbidden unknown where we did not know what to expect.

That is why Yusuf and Amina Cachalia, and their son Ghalib, will always remain etched on my mind as people who embraced us as their very own in what was then for us an extremely alien land.

Yusuf Bhai was a large man, in every sense of the term, with a compulsive urge for hospitality. Amina was petite, vivacious, full of the history of apartheid, enlivened with anecdotes. They had both been to prison but it must be put down to their political training that, like all their anc fri­ends they introduced us to, they had kept themselves free of bitterness or racial bias. That was the spirit of the anc. When Joe Slovo, white, Ashkenazi Jew and Comm­unist comrade of Mandelas, died, the mourners at the football ground in the township of Soweto were 99 per cent non-white, Amina among them, tears rolling down her cheek. 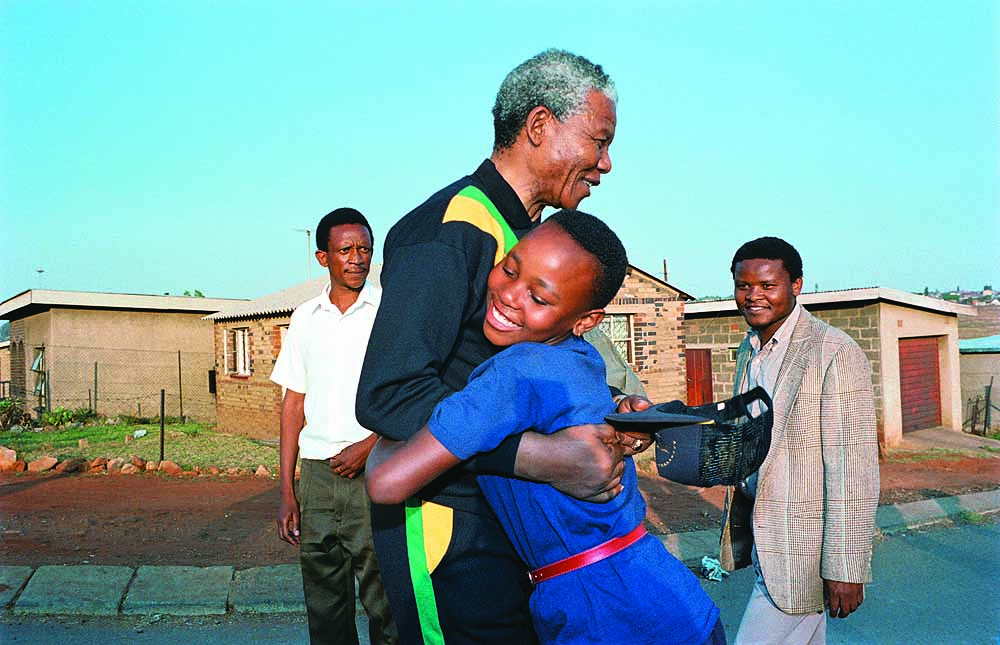 Oct 1990 Mandela hugs a Sowetan girl during a visit to the black township. (Photograph by AFP, From Outlook 08 July 2013)

Yusuf Bhai doted on Amina to the extent that even some naughty stories from Amina’s past registered with him as amusing nostalgia. Once, at the height of South Africa’s apartheid repression, Amina received a call from famous Australian cricketer Keith Miller, who had fallen head over heels in love with her during Australia’s tour of South Africa. The irony was that apartheid restricted Miller to the regimented white enclaves of Jo’burg. Amina, on the other hand, was confined to areas marked for non-whites. Yusuf Bhai thought this was an instance when apartheid had worked in his favour. He would then laugh heartily.

The ring ANC volunteers had thrown around Mandela made him totally inaccessible to scores of journalists who had descended on a country that was just opening up. Since Amina and Yusuf had taken us into their warm-hearted embrace, they made it their absolute responsibility to arrange for us the scoop the world was waiting for—the first ever TV interview with Mandela.

Both proceeded in the matter in their own styles. Yusuf Bhai called up Walter Sisulu, chairman of the committee overseeing Mandela’s programmes. Sisulu was several years senior to Mandela and the most respected Communist ideologue in the anc (the Communist-anc  separation and overlap is a complicated story). When Sisulu came on the line, Yusuf Bhai’s imperious voice boomed. “Walter!” he thundered. “You have taken Nelson out of one prison and placed him in another.” He was referring to the cordon over-eager anc youth had thrown around Mandela. Eventually Yusuf Bhai prevailed and I did get the interview outside a bungalow in Soweto. This was the first ever TV interview with Mandela after he came out of prison. And it was arranged by Yusuf Bhai.

Their son Ghalib was a “buddy” of Archbishop Tutu’s son, Trevor. He used this connection to our considerable advantage on Mandela’s second day out of prison.

It was a closely held secret, except for a very small group which included the Cachalias, that Mandela would spend his first night out of prison in Tutu’s mansion in Cape Town. “Catch the night flight to Cape Town if you want to be the first to meet Nelson,” Ghalib said. His mother had arranged for us to stay with some friends of hers, fourth generation Indian Muslims in Cape Town. Strange to reflect, but those were days before the advent of mobile phones. Heaven knows how Ghalib had arranged for Trevor to navigate us through labyrinthine passages past the kitchen at Tutu’s house. This was the only way to beat the fortifications around the mansion, meant to hold back over a hundred thousand youngsters, dancing and singing songs dedicated to Mandela.

It was like the final scene of a suspense movie. Here was Trevor, holding Ghalib’s hand who, in turn, held mine. Thus forming a trio, we tiptoed through the service sector of the vast estate. Ultimately, we opened a door. Amina and Mandela, half in embrace, greeted us. Amina had barely completed the introduction when Mandela looked at his wrist watch—“Time for Africa Calling”. He picked up a transistor radio from the nearby table. “Amina listen,” he said. There was a childlike eagerness to hear what the world was going to be saying about his release. It made for a lovely composition, Mandela and Amina glued to the same transistor radio, listening to the BBC’s Africa Calling.

For me, this was the real first—the first ever conversation with Mandela by any journalist. Since it would have been impossible to bring in TV equipment past the fortifications, it should be remembered as the first print interview ever. I saw celebrities like Ted Koppel and Jesse Jackson craning their neck from the lawns outside even as Mandela settled down to his first formal meal out of prison in 27 years. Archbishop Tutu was all chuckles; “Do you know the first dish Nelson requested for?” He rolled his eyes: “Chicken curry and rice.”