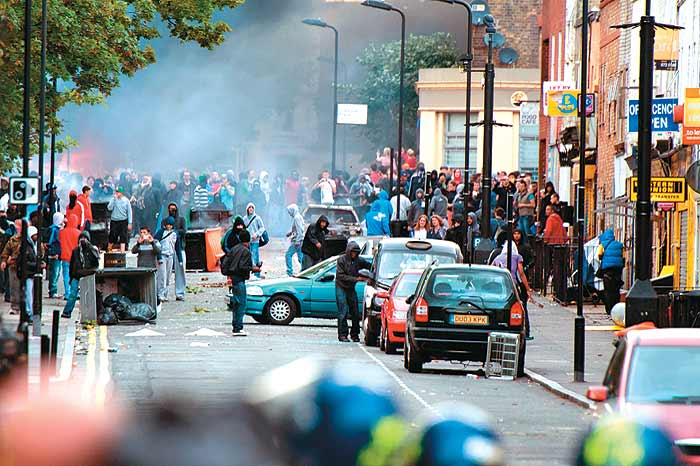 For an Indian on the street, it was a strange species of terror—not quite gripping, but quietly walking on past you. Waves upon waves of young men, having broken into the shops in Birminham’s Bull Ring, the chic shopping centre, and having been dispersed by police, were now headed for the Jewelry Quarter, long synonymous with the manufacture of jewellery in the city. Choppers clattered in the sky, police cars and bikes, sirens blazing, raced to where the eyes in the sky spotted bands of troublemakers.

Another journalist and I were searching for refuge from danger, but all doors and gates were barred. The rioters—most were kids in tracksuits—caused us no trouble though; they simply walked or jogged past. They weren’t to be bothered about the small pickings on the streets, when breaking into shuttered shops offered so much more purchase. These particular rioters were more like night-time shoppers who didn’t want or have the money to pay. We found our way into a pub, which was still doing business behind closed glass doors. There was shouting outside and the sound of glass splintering. The owner, unfazed, calmly herded patrons to the garden at the back of the pub. The vandals moved away and an uneasy quiet returned to the now desered streets. Safe for pedestrians perhaps, but for the lingering fear.

Tensions escalated during the night of August 9, when three young men of Pakistani origin, out in the streets to secure their neighbourhood, were mowed down by a car, triggering fears that the riots could take on a racial shape. Not exactly unheard of in Birmingham, where the latent uneasiness between the two largest minority groups—South Asian and Afro-Caribbean—has a history of manifesting in race riots. But by all accounts, the murders were not racially motivated. Not so the tinderstick that lit the fire. In Tottenham, north London, Mark Duggan, a young Afro-Caribbean man, died of gunshot wounds inflicted by the police, who claimed he had fired at them. Duggan’s family and friends did not buy it and protested. That sparked a local riot, which then spread in the city, and then set off flash riots beyond.

As it travelled farther, the reasons for rioting changed—Duggan, who? It was about looting, about the children of the dispossessed trying to get their hands on bling. But what triggered the unrest was most assuredly racial. Says Gilbert Achcar, School of Oriental and African Studies (SOAS), “We can’t say race has not played a part. It played a prominent part at the start. Coloured people are upset over the everyday racism they encounter, especially from the police. Strong resentment is built up because of this.” A contention backed by most Asians and Afro-Caribbeans Outlook spoke with.

The response to the unrest was racial too. In Southall, hundreds of Sikh men, with cricket and baseball bats at the ready, massed to protect their gurudwara. At the site, Paul Uppal, Conservative MP, said he was not unhappy with the vigilantism. “If the police is not there, tough luck. We’ll take the law into our own hands. We are going to protect our community,” said Ajit Singh, bat in hand. Such community-based action was also reported from areas dominated by Turks and Kurds, severely indicting the police for its failure to protect them, as darkness descended on their streets for the fourth day in a row.

As to the cause, Prime Minister David Cameron lay the blame firmly on criminality, saying: “There are pockets in our society which aren’t just broken but, frankly, sick.” Others like SOAS senior lecturer Subir Sinha see in the riots the immolation of Cameron’s ‘Big Society’ conceit. “This generation, the youth, views mainstream politics as speaking past them,” says Sinha, arguing that this demographic faces the most detrimental long-term impact of the Conservative-Lib Dem coalition’s highly ideological policies: from the higher fees for a college education (for long the vehicle to social mobility) to cutbacks in youth maintenance allowances to the closure of job centres and cuts in programmes. “They are lashing out at society as a whole. In an age when democracy has become a plutocracy and Eton-Oxbridge-educated elites rule the land and blame the poor for the position they are in, it is a rejection of public authority. In that sense, it is not apolitical, but is beyond politics.” 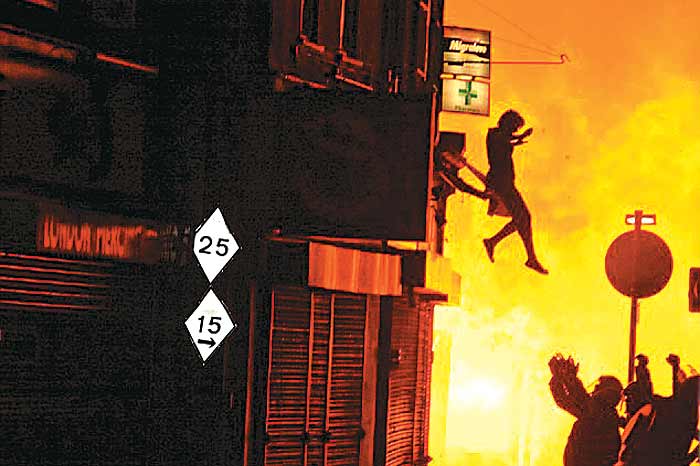 Gutting The defining image of the riots

Significantly, these, the children’s riots, coincided with the school holidays, prompting Katherine Birbal Singh, a former teacher, to say, “We have been saying for years that something’s seriously wrong with the education system. We tell the children too much about their rights, too little about their responsibilities.”

Tottenham resident Emma Francis, of the University of Warwick, says the left wing predictably blames the unrest on poverty, while the Right’s refrain about bad parenting is all too common. “But, in my view, there are clearly elements of both,” she said. “I think a lot of these children are from one-parent families, and yes, there’s a strong perception that the authority of teachers in school has been eroded, that the rights discourse is undermining the authority of parents. I would also add poverty to the list.” She refers specifically to the now-abolished ‘maintenance allowance’ that allowed poorer youth to remain in school from 16 to 18. “When Ken Livingstone, the former mayor of London, visited Tottenham after the riots, the youngsters told him that they feared they would not be able to complete their education.”

But even then, isn’t mass looting anathema to British sensibility? Contends Achcar, “You don’t see looting during protests in the rest of Europe. It’s because of the low level of political consciousness here. Looting plays into the hands of the government, the far right, racists.... This is a reflection of the weakness of the social movement of this country.” Whatever the causes, it is clear Britain has more soul-depth-plumbing to do, to rectify the failings behind one of the worst domestic conflagrations since WW II.