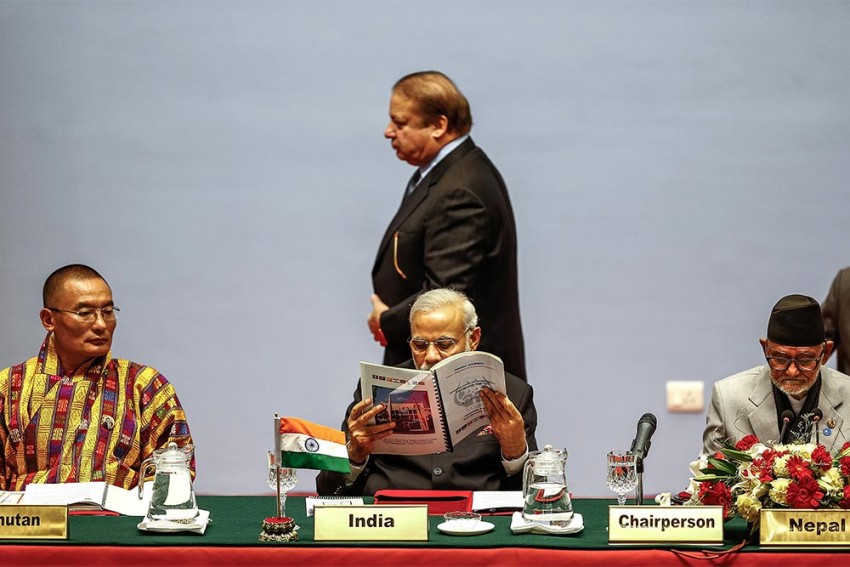 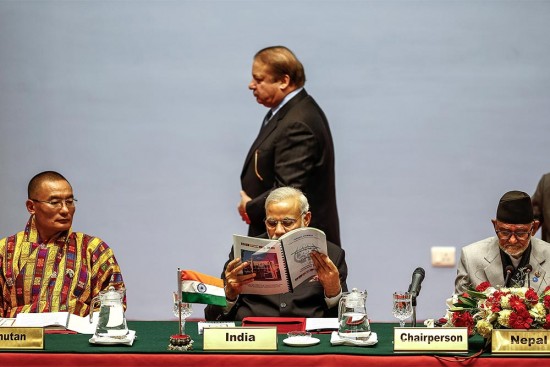 The dust surrounding ‘surgical strikes’ by Indian special forces against terrorists inside Pakistan along the Line of Control may take a while to settle down, with contrary versions emerging from the Indian and Pakistani capitals about what really happened during last week’s operation. However, irrefutably, India has managed to rally all the other South Asian nations behind its stand that terrorism emanating from Pakistan poses a threat not only to India, but also jeopardises the growth of the entire region.

This unprecedented development—being termed by some as a major diplomatic coup—started to unfold when India deci­ded to stay away from the November SAARC Summit in Islamabad after last month’s attack on the Uri military camp by Pakistan-based terror groups. Other South Asian nations, who had so far maintained a stoic neutrality to Indo-Pak disputes, deci­ded for the first time to break their silence and make common cause with India.

According to the SAARC charter, a summit of regional heads of government has to be called off if even one member pulls out. The Islamabad Summit was therefore, doomed from the time India decided to pull out of it. But the decision of Afghanistan, Bangladesh and Bhutan at the initial stage and later, that of Sri Lanka, Maldives and Nepal also, to join in the move to boycott the Pakistan meet was a cumulative and unambiguous message of ‘no confidence’  against Islamabad.

New regional groupings are a signal to Islamabad that South Asia can move toward integration despite its attempts to scuttle such efforts.

So how did India manage to make its South Asian neighbours rally behind it and take a public stand against Pakistan?

Terrorism poses a global problem and therefore most of India’s neighbours found this to be the right time to raise their voice against terror exported from Pakistan that was affecting the region. But behind such a concerted stand also lie national interest and the cold calculation that in this evolving crisis they would rather find themselves standing beside India than Pakistan.

For Afghanistan, cross-border terrorism from Pakistan is almost an existential problem, vexing as it is for India. The leadership in Kabul realises that a strong Pak­istan would try to push a client regime in Afghanistan in the name of bringing stability, thus jeopardising its own survival.

In Bangladesh, the Sheikh Hasina reg­ime had been engaged in a fight against the radical Jamaat-e-Islami, a party that continues to get Pakistani support. She had so far avoided visiting Pakistan and the opportunity of boycotting the Islamabad SAARC Summit was not one she was likely to let go. Besides, Hasina, who is fighting a virulent, Islamist fundamentalism at home, needs crucial support from New Delhi to remain ensconced in power in Dhaka.

While a decision from Bhutan contrary to the position taken by India might be said to be unthinkable, it is the support that Sri Lanka extended to New Delhi in its attempt to isolate Islamabad that has surprised many.

Colombo had been indebted to Pakistan for its support during its war against the Tamil Tigers in 2009. But in recent years, Sri Lanka has been facing problems from Islamic fundamentalist forces, believed to have been trained by Pakistan in its own country, especially in its eastern reg­ion. Moreover, it is now more dependent on the Indian market, with significant progress on the Comprehensive Econ­omic Partnership Agreement (CEPA) and commitment from India to invest $2 billion in infrastructure. Therefore, a strong statement condemning terrorism and its decision to stay away from the Summit was expected before Lankan PM Ranil Wickremesinghe arrived in New Delhi for talks with Narendra Modi. 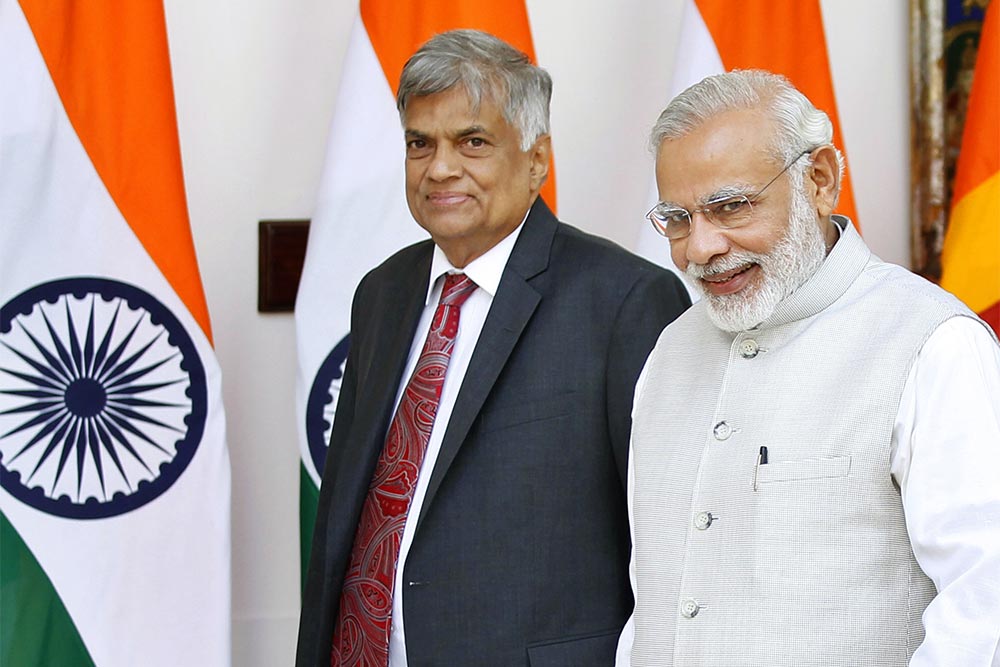 Modi and Ranil Wickremesinghe meet in Delhi in 2015

Nepal holds the SAARC secretariat and so was bound to wait for others to res­pond to India’s call. Nevertheless, it had conveyed informally that it too was willing to stand with the others taking a stand against Pakistan. This was also a shift from past practices of the Nepalese government, but then PM Prachanda’s regime is ind­ebted to India for its support that saw him back in power.

The last holdout, so to say, was Maldives. Many of its residents are students of seminaries in Pakistan and it has enjoyed cordial relations with  Islamabad. But the growing anti-Pakistan stand in the region, especially after other SAARC members decided to boycott the Summit, meant Maldives could not be the only nation seen to be keen on the meet. Finally, it also joined the others both in condemning rising terrorism and expressing its decision to boycott the Islamabad summit.

These developments have now created a situation where an attempt at regional integration minus Pakistan is being seriously contemplated by India and its South Asia’s neighbours.

The move is not so much to isolate Pakistan and exclude it from regional development. It is more a clear signal to Pakistani leaders that South Asia can move towards integration despite their alleged attempt at scuttling such efforts.

“The onus is now on Pakistan. It must decide whether it wants to pursue its old policies and go against integration in South Asia. Or change its way and be part of it,” says a senior South Block diplomat. Though such a plan was thought of by Indian policy planners in the past, the neighbours’ decision to close ranks with it against Pakistan’s inability to deal with terror emanating from its territory has given the move a renewed vigour.

A reflection of this could well be seen at the forthcoming BRICS Summit scheduled for October 15-16 in Goa. Apart from the five emerging economies—Brazil, Russia, India, China and South Africa—the Narendra Modi government has decided to invite members of the BIMSTEC, or the Bay of Bengal Initiative for Multi-Sectoral Technical and Economic Cooperation, during the outreach session of the Goa meet.

Since the SAARC Summit is now off, other forums through which the regional cooperation and integration could continue are being looked into. Five of the eight SAARC members—Bangladesh, Bhutan, Nepal, Sri Lanka and India—are also members of the BIMSTEC, along with Myanmar and Thailand. Afghanistan and Maldives, though not members of the BIMSTEC, have been invited for the Goa outreach programme as observers.

MEA officials point out that the move to look for other sub-regional groupings should not be seen as an attempt to junk SAARC. India’s commitment for regional integration through the SAARC platform remains as before. But Pakistan’s obduracy in holding the SAARC deliberations and progress hostage to outstanding disputes with India was making meaningful cooperation in the eight-nation grouping impossible.

In the past, India had also looked at sub-regional groupings like Bangla­desh-Bhutan-India-Nepal (BBIN) to push through a motor vehicles agreement between these countries. Indications suggest that more such moves would be taken to reach agreements on key issues through similar platforms.

“It is perfectly normal for regional groupings also to have sub-regional platforms within it to make progress on contentious issues,” says former Indian diplomat Veena Sikri.

A senior Bangladeshi diplomat, while agreeing with Sikri, says that his government is not sure of the future of the SAARC and when or where the next summit grouping would be held. It was clear, he says, to make an emphatic and unambiguous statement on combating terrorism, since it has become a common problem for not only South Asia but across the world.

But will all this force Pakistan to change its way? Surely, that is a hope that many of its neighbours continue to nurture. Except that no one possibly is prepared to stand guarantor for improved behaviour from Islamabad.

While The Sun Shines