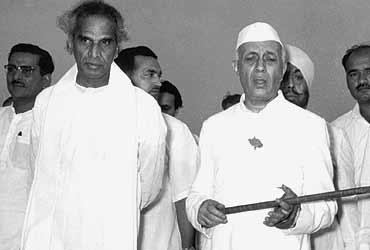 The nonsensical obstructions to historical research that Indian governments prefer to maintain lend real importance to the new release of Top Secret files that the British Security Services, MI5, kept on Krishna Menon. These documents do more than provide insight into his personal and political activities; they show how powerfully he agitated the Western powers. Krishna Menon was one of several nationalists with suspected Communist connections—others included the Africans Jomo Kenyatta and Kwame Nkrumah, whom the British Security Services placed under close surveillance—and the Menon files so far released cover a crucial period that stretches from the early 1930s to the mid-1950s. Krishna Menon’s letters were intercepted, his phone was subject to checks, and information was gleaned from a variety of intelligence sources—including some located in the Indian high commission. The details gathered in these files lay to rest some suspicions that have hovered around Krishna Menon for decades, while they confirm his psychological flaws, controversial financial dealings, and leftist associations.

MI5 kept Krishna Menon under surveillance primarily because they feared his Communist links, both before and after Independence. The files show that in the decade before 1947 he was a frequent visitor to the offices of the Communist Party in London’s King Street and he was often on the phone to Communist leaders like Harry Pollitt and Ted Bramley. However, MI5 was satisfied that Menon was never a Party member. But his nationalist political activities sufficiently unsettled the security services that they tried, unsuccessfully, to get Krishna Menon called up for National Service—as a way of stopping his nationalist political activities. After the war, and even after Independence, Menon remained an object of close scrutiny, and MI5 widened its surveillance to Menon’s commercial dealings, and the contracts he placed for Indian military supplies.