Home  »  Magazine  »  Business  » Wearing Well »  Nehru Jacket Or Modi Vest: Which One Are You Wearing Today?

Nehru Jacket Or Modi Vest: Which One Are You Wearing Today? 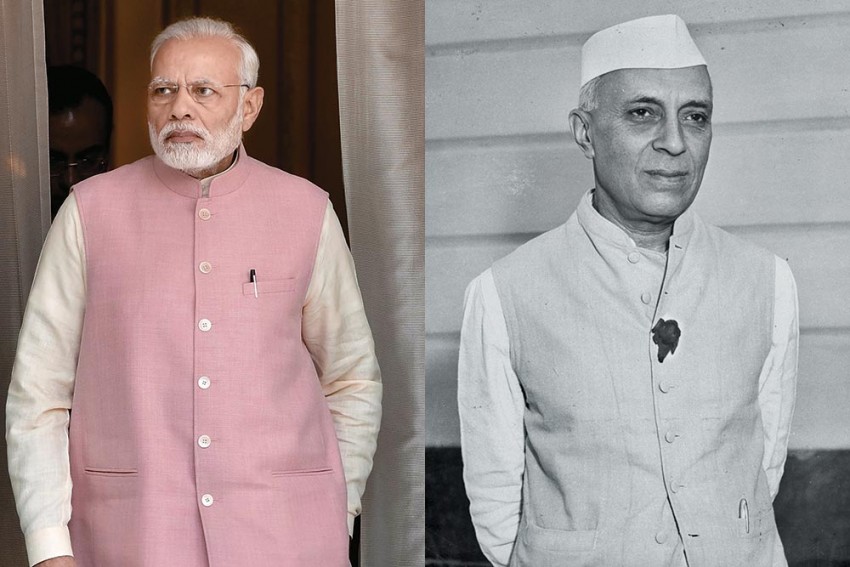 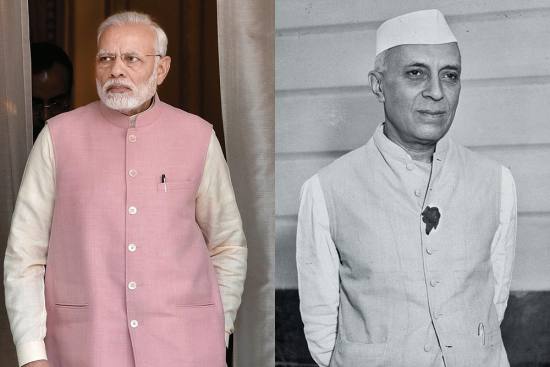 Amid the whirligig of changing customs and ideals of Indian politics through generations, only one article has survived unsca­thed: the Nehru jacket—short, snugly fitted, its modishness personified by Panditji, who stands out amidst nationalist leaders in photographs from the 1930s. A sartorial constant with politicians ever since, it has also been adapted at times. An example is the ‘Modi jacket’, in news recently when South Korean President Moon Jae-In tweeted his thanks—along with pictures of tailored jackets in four colours—to Narendra Modi for the handsome gifts. A storm sprang up in no time, with many arguing that before 2014, it was the Nehru jacket.

Yet, Modi’s version of the garment has caught on—its wide display in Delhi’s markets a testimony to its growing popularity. Actually, it’s on the natural, evolutionary path of the outfit known as ‘Sadri’ or a variant, ‘Bundi’, that we find the Nehru jacket and, 80 years on, the Modi one. “This is cultural misappropriation for political advantage. The Bundi jacket is neither Nehru’s nor Modi’s. It belongs to a costume legacy that is 6,000 years old,” says designer Wendell Rodricks.

Sanjana Bubber, co-founder of Bubber Couture says, “Nehru made the slim, buttoned mandarin collar a popular classic…. This style was called the bandhgala , worn for formal occasions. This has been popularly called the Nehru jacket, or the ‘bandhi’ jacket (part of Indian diplomats’ wardrobe).” Jitender Chauhan, personal tailor of Modi, points out differences: “The colour tones of the two jackets are different. Modi jackets are found in different colours. They are longer in length compared to Nehru jackets.”

Nehru wore classic and simple colours; he mainly wore beiges, greys, whites and blacks. Says Bubber, “The Nehru jacket was known for its simplicity; it was devoid of surface pocketing details. Sometimes, the bandhi jackets had side slits. Nehru wore the bandhis either with straight hems, sometimes an outward ‘V’ hem, buttoned down, usually with five buttons.”

Being modifications of the traditional Sadri, designers see little that separate Nehru and Modi jackets, except uniqueness of style.

The Nehru jacket, then, is shorter in length than its 21st cen­­tury version,  which finishes right below the waist. Udit Toshniwal and Ayesha Kalyaniwalla say, “Nehru jackets started with V-necks, then moved to mandarin collars, whereas the recent ones have short, round collars.” Again, Nehru jackets use khadi or even Cashmere wool (for a warm version), while Modi jackets are made of Matka silk, khadi silk and polyester.

Nehru’s refashioning of the Bundi into a khadi jacket came in the 1920s, as a response to Gandhiji’s call to boycott foreign goods. As an enduring sartorial symbol of the struggle for India’s Independence, it stands second to only the ‘Gandhi cap’.

The various hues—off whites on pastel greens, oranges on a pastel sky blues or grey, mustards on oranges—worn by Modi on his jacket strive to convey a message as well: a certain vibrancy that hopes to embody a can-do spirit, a conscious departure from the hushed slumber of blues and whites favoured by former PM Manmohan Singh.

To reiterate, designers see little diff­­ere­nce between the Modi and Nehru jacket; they are modifications of the traditional Sadri. Designer Mitesh Lodha says, “They both made the Sadri their own by carrying it in their own unique style, with Nehru opting for more earthy tones and styling it with a statement rose and topi, whereas Modi has a brighter colour palette and styles it with a pocket square. They both opted for Khadi and natural fabrics.”

However, to give credit where it’s due, Modi has made coloured jackets more popular; following his example, people are willing to experiment more with different colours. Classic, neutral shades are considered passé; Modi’s colour palette is the new and conventional choice.

As matters stand, the vivacious Modi jacket has fought its way into Indian formalwear. But remember, for a classic, dressed-up feel, a bespoke Nehru jacket woven in premium fabric has stood the test of time.

All Shapes Derive From The Square