There's little forgiveness for the General. What will his exit bring? 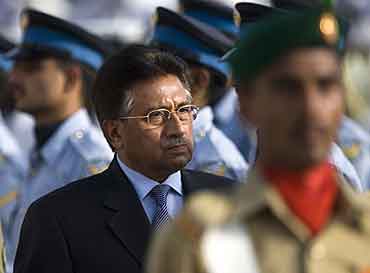 As Pervez Musharraf returned to his Rawalpindi residence, Army House, after announcing his decision to resign from the office of president, he can't have missed the throng of people en route chanting, "Hang him! Hang him!" The crowd was mostly Pakistan People's Party (PPP) activists, finally giving vent to an anger which had been simmering over months, their mood turning ugly as the hours passed. "This is the city where he killed our leader Benazir Bhutto. This is the city where Zulfiqar Ali Bhutto was hanged by the army. We will not let Musharraf escape," they shouted repeatedly.

But it wasn't just PPP activists who were celebrating Musharraf's resignation. In the vicinity were the lawyers, dancing and distributing sweets to passers-by, even to the policemen who had beaten them mercilessly during the months of protests and boycott of courts organised against the sacking of Chief Justice Iftikhar M. Chaudhry. They too were demanding that "Musharraf be tried for violating the Constitution under Article 6 and hanged". This clamour was, of course, with an eye on the future. As lawyer Pervez Khan told Outlook, "There should be punishment for Musharraf. We've to make an example of him...this country should never again witness Musharraf-like adventurism in the future."